Welcome aboard. Sit back and relax embrace the suck.

Not your Fuhrer's father's flugbesatzung: 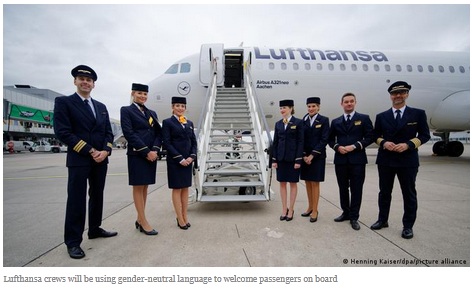 Big Biz loves the wokeness. Those Big Cheeses and horrid HR ladies don't have so much real work, so they are happy to go along with the Politically Correct and worse agendas for new materials for memos and email. It doesn't hurt either that when the Feral Government, completely controlled by the ctrl-left at this point and a part of the Crony-Capitalist system, says "we have many genders and jump to it with your program", Big Biz will answer "How high, Xir!"

Et tu, Germanus? OK, well, they don't know any Latin, I guess, those Huns. Since the end of WWII, the guilt that has been pushed upon them must have been overwhelming.

The picture above comes from the Business section of Deutsche Welle a "multimedia outlet", and an article titled Lufthansa will no longer address you as 'ladies and gentlemen'

Diversity isn't just an empty phrase, but is a reality for Lufthansa, Anja Stenger, the company's spokeswoman, told DW. "Starting now, we also want to express this attitude in our language," she said.

See, there's one of those real-job-lacking employees for ya'.

Lufthansa crews would now use gender-neutral phrases such as "Dear guests," "Good morning/evening" or simply "Welcome on board." The decision on how to address passengers will ultimately be made by the crew, who were informed about the change in May. The change is effective immediately.
[My bolding.]

Ahha, it's "effective immediately", but "the decision on how to address passengers will ultimately be made by the crew". The union will hopefully get involved for any Captain(s)*, almost all who are un-woke, make the wrong decision. As for the flight attendants, most of the that crowd probably sees no problem with the change.

Then, we hear from a one Alexandra Scheele, "an expert on sociology and economy". There's another person without a real job.

This move works at a symbolic level. It can be considered as a 'gender-sensitive' step through which the gender binary is questioned," Alexandra Scheele, an expert on sociology and economy at the Bielefeld University, told DW. "People who identify themselves beyond male/female, as well as everyone who is questioning the binary systems, might be addressed better without using the phrase 'ladies and gentlemen/Damen und Herren.'"

Or, they could just question their own sanity, and hopefully get over all this.

I'm not sure how the ctrl-left are going to deconstruct, as they like to say, the entire German language to get rid of all the gender-dependent grammar. Hell, even things have a gender. "Airplane" is neuter, so they've got that going for them. OTOH, I can't really fault some of these genderbender BLT-G** volks for mistaking the gender of some of their favorite possessions. I mean, if you want your Swasticker to be a lady and have the ability to fly in the stalls of the damenbaden, then, by all means, knock yourself out. (You'd damn well better, before the modern version of the SS kicks in the stall and takes your non-binary flag and shoves it up your non-binary ass!)

Enough with the guilt-tripping of our German readers. I don't like the whole world kneeling down before the wokeness, but I also don't see this as a real issue, simply because how many actual ladies and how many actual gentlemen are onboard these planes anyhow? What, with the TSA and now the mandatory face-diapering, is there any way to even BE a lady or a gentleman in flight anymore?

* who almost always makes that initial welcome announcement at the gate.

** I try to remember it as Bacon, Lettuce, and Tomato, with a side of Gaucamole. Hey, just want to keep up with the times, is all ...

Dieter Kief
PS Ohhh - thanks everybody for ridin' along on our strange trip (Truckin' - hehe).

Are we Germans doomed - no, no, not for a long stretch. Even though there are lunatics aplenty on their way.
Modern rationality is a hard bread to chew on, we know that. Rightfully famous sociologist Max Weber knew it, he talked about the iron cage of obedience, that the modern state of mind - - - (at least partially) represents - or is caught in.

But all in all, everything is going just well around here. I rode the bike today into town and was in the best mood - I even sang - - - until I realized that I had forgotten my purse - right at the little roadside chapel from - no kidding - - - 1508 at the western entrance of Litzelstetten above the lake.

But that just meant that I was even a bit longer on the bike, which is almost always very good and definitely was today - a mild 20 degrees, soft wind, soft - rain every now and then. Perfect!

As far as lunatics go - every time and society has its share, and they must be looked at and somehow opposed, that's true.
I started opposing the postmodern and deconstructivist mindset's lunacies in 1985 ff. - I was the only one then in Kontanz University with my lectures. But I somehow succeeded then and am at that subject still while commenting and my impression is: Ok, these philosophical irrelevancies had their merits obviously for quite a few people but they have also their downsides (at least in my eyes), and we'll see, where that will all lead us to.

My I mention Gottfried Keller here - the Swiss 19th century novelist and writer of novellas and short stories? - He meticulously portrayed all kinds of lunacies and ticks and dysfunctionalities in his short-stories and novellas not least (The Poeple from Seldwyla - Die Leute von Seldwyla), Das Fähnlein der sieben Aufrechten (great, great, great), Der Schmoller (dito).
And what came out of it in Switzerland - after generations in despair and - hunger (!) even - not more than 200 years ago: One of the most beautiful systems of citizenship in Europe at least. - So: Hope brings eternity!

Every age carries with it its special follies. - What I think is plain wrong is to assume that the time you're living in should - in this regard - be different from all the other times. No. - This would - not least - not be human. Because it is rather human to make mistakes - and to be and act - - - - - stupid, ins't it!?

I still am a Kantian and do think that humans - should act reasonable. Just to avoid - confusions or doubts about my standpoint. But I'd hold that in order to understand Kant (and the real world in toto) you have to read keller too - and Jean Paul and Goethe and Shakespaere and Evelyn Waugh, Tom Wolfe, T. C. Boyle (Outside Lookign In - Great folly novel about Timothy Leary and his Harvard gang - and about the calm Baselian chemist & bicyclist by the name of Albert Hoffmann) and Mario Vargas Llosa - etc. - Viktor Pelewin, David Guterson, Viktor Jerofejew, P. G. Wodehouse and Jonthan Franzen...Joseph Freiherr von Eichendorf. Johann Jakob Fischart. Christoffel von Grimmelshausen (Simplizissimus). Baltasar Gracian.Joseph Joubert. The French Morlists. Moliere (best Kung-flu play of all times: The Imaginary Invalid!). And Miguel de Cervantes' Don Quichotte. I: And - Miguel de Cervantes Don Quichotte - - - :I (to be repeated ad infinitum)- - - Howgh!!
Adam Smith
PS: Good afternoon...

Mr. Kief, are you talking about this guy?

Integration officer with a focus on refugees? 🤔

“Someone ought to tell that Westernised African Gent (no doubt living on our tax Euros)...” - Mr. Alarmist

“Tchakoura acquires funding from the state and federal government for integration projects and, if necessary, implements them in partnership with relevant stakeholders.”

Of course he does. German stakeholders desperately need more Africans!

And, for those “questioning the binary systems”...

Have a great day everyone!

☮
PeterIke
PS
As a person of German extraction whose parents were off the boaters (literally), I have to say it's desperately sad to see what's become of Germany. The country is doomed, plain and simple.
The Alarmist
PS

I believe you meant the neuter form: “Et tu Germanicum.”

I don’t care if they call me Mr. or Doctor, as long as they continue to kiss my HON Circle ass.

Someone ought to tell that Westernised African Gent (no doubt living on our tax Euros) that Europe adds value to the resources it purchases from the sh!thole countries of the world. A lot of that value is added by European-owned companies in those very nations, helping if only a little to lift those poor souls out of some of the poverty and despair inflicted upon them by their own leaders and social systems. There’s a reason the third world is the third world, and it is not a lack of magic dirt ™️, nor is it exploitation by European companies.

Moderator
PS: Dieter, don't get me wrong - I just figured it was a lot harder with German not being Latin-based. It's got to be harder to learn, or maybe not? I am not very good at languages, but did take my share of HS Latin and French.

So, there you go, Dieter. A GERMAN guy* said it, BMW? All that quality was extracted from the 3rd World, places like, I dunno, Togo, haha.

From their "About" page I was kind of clued in that Die Deutsch Welle is not very "based". The article made this clear anyway.

Yes, interesting times, if by "interesting", we mean stupid. ;-}. Have a good afternoon, Dieter.

The city of Konstanz has an anti-discrimination agent, a proud black man. He - declares - today in our local paper Südkurier that it is incredibly important not to discriminate. And he adds: Europe - to this day!!, August (hoho) the third, 2021 - does not earn its riches, but is extracting them from the Third World. David Tschakura, a member of the Green Party with roots in Togo, explains: "The prosperity of Europe is produced "außerhalb" - = outisde. And that is true to this day". -!! - Now ya know, partner in the imperialist crime, what they're doing with my taxes at our beautiful lake: They are creating awareness - the most precious of all things that ever there were - more precious than gold...!

Die Deutsche Welle is in Cologne - 100% tax-funded and woke- so - That's where another part of my taxes ends up: Creating even more awareness worldwide - because that is what this enormous Radio station with thousands of employees is up to...

Another group off mildy crazy youngsters, one of them I know personally, asked the mayor of Konstanz today to disrupt the towns gas-infrastructure - instantly - or even better: yesterday! - because the world can't stand more gas being delivered and - - - - - - - - burned, finally. That's what is so utterly devastating about it - see?!