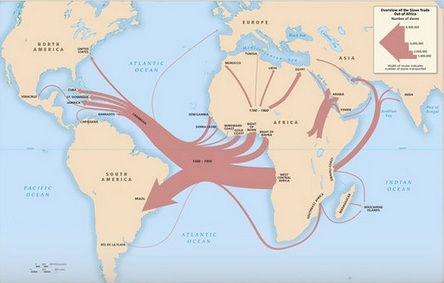 As you may know we LUV LUV LUV Geography here at Peak Stupidity. It's great to have a map as our header image, and this one is clear, concise, and highly illustrative, the latter meaning it may become verboten, if, say, the good old ADL has anything to do with it.

He neither generated all the data for this map nor put it together, but the writer we refer the reader to today has put together a simply excellent short summary of history of the slave trade, mostly out of Africa, but plenty out of Europe too. Jared Taylor, head of the American Renaissance website, wrote this as a retort to those woke and woke-inspired idiots who would deride White Americans, ex/current*) slave holders or not, about slavery in our country's past. After reading Wait, Slavery Is OUR "Original Sin"?, Americans should be PROUD to have had the very small role in use of African slaves, compared to almost any major section of the New World besides Canada .

Mr. Taylor wrote a very good title too, as that's what this BLM, woke, statue-toppling, name-changing, kid-indoctrinating bullshit is about, making it out like American slavery was just the worst damn thing that ever happened in the world.** Peak Stupidity explained in our post soliciting our very generous, if I do say so myself, Slavery Reparations Plan, that slavery has been a thing since the time of the beginning of the Old Testament. In fact it is noted with absolutely no abolitionist talk all over this book. We noted:

Jews have had ancestors held by Egyptians, Hittites by Caananites, Arkites by Girgashites, Sinites by Hermaphrodites, and more recently, Hindu-H-1Bites by Microsoft Windites.

Jared Taylor includes the same opinion, with lots of historical examples from the Old World and the New. Some of the history, especially that of the Moslem slave-holders who took White European slaves (in the millions) along with the sub-Saharan Africans, is sickening. It truly makes the American experience a lot closer to a picnic than almost anyone would dare admit in public.

Jared Taylor is not only a brave man for being on the side of truth regarding race, but he never fails to be a civil and erudite gentleman when as he writes and talks about it. Pretty soon though, we're going to need some non-civil, non-erudite dudes to move this opinion along. This great article should be a start for those others to base a counter-movement to this Blackety-Black movement that's just building up continuously. If not any other piece of writing, White Americans who care about our future ought to spread Mr. Taylor's article far and wide. Print it out. Post it, carefully. Give it or link it to anyone who will not immediately throw it out or delete it.

* Sure there are a number of Americans who have been holding household slaves, such as Chicagoland Mom Nawomi Awoga and California couple Ijeoma Chukwunyelu and Nnamdi Onwuzulike of the East Bay, as related in The Horrible Legacy of Slavery Continues .... A Chicagoan or Californian had better learn early that once you set foot in the Bodie McMansion, you'd best setcher mind ta workin'.

That's been a thing for a while, but there are even field, well OK, temple niggras now, as we related in New Jersey Jones and the Temple of Doom. Thankfully, a lawsuit was filed against the offending BAPS Church, no not Baptist - that stands for Bochasanwasi Akshar Purushottam Swaminarayan Sanstha. What a weird name for an outfit in New Jersey - maybe they come from deep in the Pine Barrens.

** BTW, when you think about whether nefarious Communists are behind the scenes of these new movements, remember that anything "America Bad" is what they want to spread. Saying that this country has some particularly evil history regarding ANYTHING really, not just slavery, is their style of spreading pernicious lies.

Mr. Alarmist. I just reread your comment and realized you wrote Death Stab, not Death Jab. Either way I like it. Thanks.

And good afternoon Mr. Alarmist. I too would like to thank you for your report of your HR experience. I had not heard about the Steelers making those who decline the Death Jab (☺ thanks for that) wear the yellow star, I mean, yellow wristband. It's all so surreal, and I can't believe this nonsense is still going on.

It would seem to me that Walmart, or any other employer, cannot legally asks about vaxx status. As you say, it's experimental, of dubious quality, potentially dangerous, and frankly none of their damn business. However, this is not the first I've heard of this sort of thing.

I have a friend in Ashville who works for Trader Joe's. In April he mentioned that he had to wear the face diaper while his Death Jabbed cowokers were not required to do so. (He declined to disclose his vaxx status to HR and they are checking employees vaxx cards or something before allowing them to show their face at work.) He asked his HR guy about how any of this is legal. The HR automaton replied with some sort of “Just doing my job” “My hands are tied” nonsense. Surely they could just look the other way when these employees decline the the dirty old bitch rag. I know this face diapering nonsense is very stressful for my friends.

I noticed today that Google and Faceberg are mandating employees be needled before they return to office work, and that FED inc. is looking to make it mandatory for feral employees. I fail to understand how any of this is legal and I don't know why they are so hell bent on getting the poison needle into so many arms. What is the real agenda here? Are they just looking to take the right to bodily integrity and sovereignty away from the proles? Is this part of the depopulation agenda? (I suppose time will tell.)

I think all of us should decline the kabuki healthscare theater. Laugh them out of the room. (Fortunately for me, I do not have to deal with any such nonsense.) I'm glad you stood up to your employer’s HR head. I wish everyone would do so.

If I were a cashier at Walmart I would do as you say, simply walk in to work sans mask. Assert my rights and hold my ground. In my case, I'm fortunate enough that I could afford to be fired. I might even have the fortitude to go through the lengthy process of suing them for wrongful termination or something like that. (Though in this political climate I'm not sure such an endeavor would be fruitful.) However, my friend in Ashville and my friend at Walmart are likely not in such a position. I'm sure they are begrudgingly complying as termination could lead to eviction and many other such uncomfortable indignities.

Thanks for sharing your story.
I hope you have a great afternoon.

☮
Moderator
PS: Thanks for the report of what your interaction with HR at your job, Alarmist. Nice job. The nurse in our family says that, while the jab is not mandatory right now, it may be soon. I think she's right that there will be no solidarity on it*, if they demand the still third of them who are un-vaccinated to get it. She may up and quit, because, really, she had been thinking of changing her plans anyway (still in the nursing field, just not this deal)

I think some threats to HR about possible lawsuits and what they may be getting into could possibly put the scare into them. I really don't have any lawyer friends, but it'd be nice to get someone I know to draw up a nice, friendly, threatening letter, ready to hand to HR.

* It's 90% or more women, from what I gather. I think they'll fold one after another.
The Alarmist
PS

@Mr. Smith, your cashier can simply walk in sans mask ... Walmart cannot legally ask for her vaxx status. Masks for all or masks for none.

My European employer’s HR head started down this road, and I reminded her that these were still experimental therapetuics only given conditional authorisation, and noted that there was now plenty of press indicating the vaxxed were just as dangerous, if not more dangerous to the unvaxxed as the unvaxxed might be to one another. Masks for none, or masks for all. They also have no legal basis to ask for employees’ vaxx status ... yet. You can be sure privacy laws in the Western world are going to start changing soon as they seek to eliminate the still too large for political comfort control group of non-volunteers. I had yellow covid-shaped stickers that say “NO VAXX” made up to hand out to the forty percent of my colleagues who declined the death stab if HR keeps pushing the pro-jjab agenda. One could tell it wasn’t going to plan when they started offering free jabs to employees’ family members including parents.

Did you catch that the Pittsburgh Steelers are requiring the large number of unvaxxed players to start wearing yellow wristbands? Not much different from yellow stars.
Adam Smith
PS: In other news...

It turns out French negroes are better than American negroes at African Tree Hockey.

“This New Science™ is worrisome...”

I went to walmart yesterday only to learn that management has proclaimed a new edict forcing the unneedled employees to wear face diapers while leaving the employees anointed with the sacramental poison free to spread their disease. My favorite cashier is not happy about this. (She hates the damn rag and knows that vaccinated people spread disease.)

I do not imagine this kind of division in the work place (and society) is going to go well...

☮
Moderator
PS: Thanks for that one too, Adam.

As for the Hebrews and slavery, my old post on the PS Reparations plan had that one part as a humorous bit. The basic idea though, is that there are a large number of people of a large number of races and ethnicities that have long-ago ancestors who were slaves or could well have been.

I see no difference with the black people 156 years later than if it were 1,000 or less for the millions of White slaves taken by the Moslems or if it were 4,000 years ago during Biblical times. It's over. They are long dead. You don't know any of them. Quitcher bitchin'.
Moderator
PS: I also LUV that site at first glance, Alarmist! Thanks. The # 2 of today's(?) memes needs to go up on PS, though I am backed-up with post ideas at this point, without even getting into the Kung Flu.

We have had it pretty good lately, but damned if I don't see a few more masks on than I did last week. Do all these people read Steve Sailer and take his depressive view to heart? Haha, I like the guy, and if they really would read him, I'd say it'd be great on the whole. However, if it were one article we could spread around to get all Americans to read, it would be this Jared Taylor article.
Adam Smith
PS: Good afternoon Mr. Alarmist, Mr. Moderator...

I really wish the (((slavers))) would have left the Africans in Africa where they belong.

Thanks for the history lesson and the cartoons Mr. Alarmist...
https://i.postimg.cc/fR59LYkJ/Covid-Lottery.png

From “27 COVID-Skeptic Memes” at OffGuardian ...

There are some recent archeological finds that while Egyptians held foreign slaves that included some Hebrews, the Hebrews weren’t so much a slave class in Egypt, but were instead a merchant class that annoyed the Egyptians to the point of being driven out of Egypt and back to Canaan. This tends to be more consistent with the longer historical record than the Book of Exodus.