Stupidity spreading east and music for the Parrotheads

"What the fuck do you mean we're out of Ivermectin? I got people dying in here!" 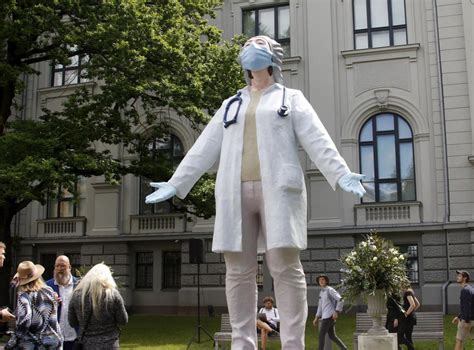 This is from our "About" page:

This stupidity has reached the highest levels in these United States, western Europe, and the western societies in general. There are many theories of the origin and modes of transmittal of this stupidity, though, as often is the case, it is speculated that epicenter was the southern and central coasts of California. Other theories point to New York City, Washington, FS, and/or Karl Marx's ass.

Well, from the picture of a 20 ft statue of Pandemic Lady Hero just unveiled in Riga, the stupidity has obviously been spreading east, into at least part of the old East Bloc. Latvia was under the Soviet sphere, so has experienced its share of stupidity during those years.

Many people have claimed recently that the ex-East Bloc countries had acquired a natural herd immunity, if I may, to the modern stupidity from the years of the Communist pandemic. The EXPERTS of the Peak Stupidity medical staff, through spokesman Dr. Al-Bendova, have put out an current SA (Stupidity Advisory) that covers more than just the Western World. We are to look out for a new variant of the Stupidity Virus - STUVID-21, that will attack even those with that built-up immunity.

How do you even walk into the building with something like this out front? I guess I'd have to have fluids surging out of every orifice in my body from eating a Latvian TV dinner of Liepajas menciņš with a Soviet Era expiration date. I always remember a line from one of my favorite pop and sailing-rock genre* songwriters, Jimmy Buffett. It goes:

I don't think I'm gonna ever let her cut on me.

(OK, it was "him" in the original, a surgeon drinking Tuborg beer with his colleagues at the strip club.) Well, Peak Stupidity already featured the song with that line, Miss You So Badly, from one of Mr. Buffett's best albums, Changes in Latitudes, Changes in Attitudes. That was in this post, titled with the line above.

Well, we've got to feed the Parrotheads once in a while, so we've got another one, that has even less, nothing, in fact, to do with this post. From the album Mr. Buffett put out just before Changes in Latitudes, called Livin' and Dyin' in 3/4 Time, Ringling, Ringling is pure country.

Jimmy Buffett must have spent a decent amount of time in Montana, as the he has lines in both Miss You So Badly and Come Monday that refer to Missoula (the former) and Montana (the latter) in addition to this song.

We've got plenty of good stuff coming up - more "Peak Stupidity Roadshow" curmudgeonry, political stupidity, and a proposed Constitutional Amendment, for starters. Thanks for reading, writing and listening!

PS: Jimmy Buffett did not BS with his geography in the lyrics. The train line that goes through Ringling, does wind it's way northeast, meeting up with, then paralleling, the MT-294, then paralleling US-12 east past Roundup to Musselshell****, on the order of 100 miles away. How could it have an electric train, though?


* He calls it "drunk Caribbean Rock".

**** Been through there too. A big deer jumped onto the road in the other land of the #12. I'd driven 1,100 miles already, so I figured that was a sign to stop for the night in Roundup.

Shouldn't that statue show the woman doing a tik-tok dance routine? Because that's what real "Healthcare Heros!" do.
Moderator
PS: Yeah, Peter, it's hard to tell who will get infected next. Even under the Butcher Mao, the guy was for Communism first, Chinese people next, no matter how miserable a life for them, but none of this multi-cultural woke stuff. As you say, they follow the strong hand. What if that hand gets infected with the STUVID-21 woke-spike-protein?

It'll be blamed on America. Well, Ron Unz will say we infected them on purpose during our trip from Fort Detrick to visit the Great Wall. I would see it just as I see this Flu Manchu - hey, it came from China, I'm pretty sure, but that doesn't meant I blame the Chinese for the virus. It comes under "shit happens". The PanicFest and LOCKDOWNs don't.

Your suggested change has been incorporated.
PeterIke
PS
Should we call them Latvianx now that they're woke?

The East Bloc is certainly more resistant to the Western commie virus (so unlike the Eastern version), but they can't hold out forever. With the hegemony of Western "culture" they are awash in GloboHomo. Maybe with the rapid rise of the Chinese film industry -- now delivering films at a production quality level with the best of Hollywood -- they can shift some of their viewing habits to Chinese fare -- patriotic, masculine, mono-cultural. My guess is that the number of black male / Chinese woman couples in Chinese cinema is... not a big number.

Korea seems destined to turn into a Woketopia, but China seems impervious, even though Chinese Americans are easily turned into woke monsters by Big Education. Chinese are very, very malleable and follow the strong hand.

Was I making a point about Latvia?

Oh, the dialogue caption for that statue should be, "What the f*ck do you mean we're out of Ivermectin? I got people dying in here!"
Moderator
PS: "Satan is the original tranny..." Haha, Merlin!! Do you mean tranny as in "a sweet transvestite, from Transexual, Transylvania"?

NewRouter, thank you so much for this info. I had no idea there were electric trains out in the boonies, but they did have all that hydro-power. From your link: "Between 1914–1916 the Milwaukee implemented a 3,000 volt direct current (DC) overhead system between Harlowton, Montana and Avery, Idaho, a distance of 438 miles". Harlowton is East of White Sulphur Springs, on the US-12, but well west of Round Up, hence Musselshell. I guess they could have extended it east too...

I love that geography!

newrouter
PS "The Milwaukee chose at this time to end its mainline electrification. Its electric locomotive fleet was reaching the end of its service life, and newer diesel locomotives such as the EMD SD40-2 and the GE Universal Series were more than capable of handling the route. The final electric freight arrived at Deer Lodge, Montana on June 15, 1974
"

https://infogalactic.com/info/Chicago,_Milwaukee,_St._Paul_and_Pacific_Railroad
Merlin the Wayfarer
PS Now you know why the Satanists have the like wolves among sheep we have wondered.
Satan is the original tranny and comrade Karl served his lord until the end with the prediction that his lasting curses would burn down the world.
Adam Smith
PS: Good afternoon...

Thanks for the helpful tip Mr. Alarmist.

☮
Moderator
PS: Haha, Alarmist! No, she's not those ringers on the web sites. She's probably the girl you'll meet when you step out of the airport though. I've heard of people trying to meet Chinese ladies whose .jpgs were of movie stars. Hey, we don't keep up with Chinese entertainment. How are we supposed to know?

BTW, I will admit I got on one of those Russian Babes sites for a while. For some reason about 10-15% of them had their occupation listed as "Economist". I remember thinking, man, that's a lot of Economists for a country with such a screwed up economy! I thought later, oh, I guess they meant 'home economist', as in 'homemaker'. No they are not building contractors either, haha. I don't like that term so awful much, but how about something like "Family Formation Implementer". Too clunky, but I'll work on that ...