I pity the pundit...

... who is faced with the awesome power of Peak Stupidity! OK, I just wanted to get that Mr. T line in, and I don't at all pity this guy - he's one of my favorite political guys all around: 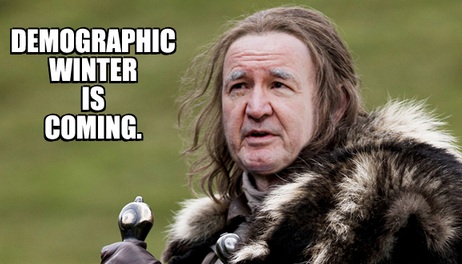 (We wanted a regular picture of the man, but this one was too good to pass up.)

He's not a pundit I read regularly anymore for reasons described herein, but I have a lot of respect and admiration for Pat Buchanan. He has been a true Conservative, trying to navigate within the quagmire of Conservative, Inc, since he worked for Richard Nixon*. Peak Stupidity even wrote a special post to celebrate Mr. Buchanan's 80th birthday 3 years back. I would have loved to have met the man back during his '92 and '96 Presidential campaign especially. Even now, it'd be great to meet him.

I've commented before that this guy is just working - mainly writing now, I'd guess - with an assumed level of civility of American politics that is 25, but easily arguably 40 years old. It's no way to operate now. I mean, it's nice to read a guy that sounds so civil and calm as if that fits into current American politics. The problem is, the ideas put across in this manner are just obsolete by being written with this assumption.

I don't read Mr. Buchanan much anymore, because his solutions to our ills are laughably naive. Oh, we just need to wait for the mid-terms, get someone on our side (really, is there anyone?) into the House blah, blah committee, build up a new coalition, wait until the ctrl-left politicians reach across the aisle**, make a better compromise looking forward to 2028 ... while in the meantime one or two MILLION newcomers who don't give a damn about the old Republic enter the country yearly and the ctrl-left just introduces new programs of extreme stupidity to screw the White man continually that Conservative, Inc. won't even fight against.

Republicans seek to deny “full and free and fair elections” and are engaged in “the most un-American thing that any of us can imagine, the most undemocratic, the most unpatriotic.”

When Sen. Joseph McCarthy challenged the patriotism of Truman Democrats in such terms in the 1950s, he was censured by the Senate.

Is Biden really saying that minor alterations in election laws, all of which would have to pass muster with federal courts and the Supreme Court, represent an existential threat to our republic?

This is beyond hyperbole. It is ridiculous. It is absurd.

Such hype is a measure of just how far out of touch with the real world the rhetoric of our reigning elites has drifted.

Mr. B, I'm sorry to disagree, but it is NOT absurd of them to SAY this. They are NOT out of touch. You don’t understand the mentality of the modern left. They are not Tip O’Neils and Pat Moynihans, reaching across the aisle, debating civilly in front of the American people. It’s not 1980 anymore.

The people who set the old senile Biden up to this know quite well that the protests, rioting and temporary fun spent in the “People’s House” on Jan. 6th were absolutely no real threat and, except for the murder of Ashli Babbitt by Michael Leroy Byrd, a very peaceful event compared to hundreds of riots and looting events done by black thugs and antifa Commies that went on the previous year.

The people coming up with this hyperbole know what Biden is saying is absurd on it’s face. It’s not absurd that they use this rhetoric though. They know they are lying absurdly. They know that all the sane and Conservative American people know that they are lying absurdly. They don’t care. The ctrl-left will keep up with this lying because people don’t do enough about it. The good people who had a good time on January 6th are still in jail, being treated harshly, as if they were America’s enemies.

That off my chest, I happened to see the link to his next column posted on The Unz Review, titled Why Can't Biden Stop This Invasion? and clicked. Mr. Buchanan refers to the newest Blue-squad surge down there on our southern border. After giving us a short history lesson about American presidents and generals using force to quell and punish invasions from the early 19th century through the early 20th, then a mention of Ike's "Operation Wetback" in 1954, he asks:

And how is President Joe Biden handling his sworn presidential duty to defend the states of the Union from invasion?

Pat, dude, the guy was lying his ass off when he swore on the Bible! Did you notice him defending the US Constitution? I must have missed every bit of that. They all lie now. The lies aren't even good ones. Again, they don't care whether we know they are lying! He asks:

Why cannot we stop this invasion?

Nobody in "our" Feral Government WANTS TO! Geeze, if they did, we could have turned this demographic upheaval around in the mid-1990s, when at least the few Americans like you, Mr. B, were well aware, and the public would have been quite on-board with it. At least, in '16, even if the Blue-squad didn't want to support Trump, they could have written their own plan of border control. Believe you me, Americans don't care who gets the credit. The D's could have pulled a Bill Clinton-pushes-for-welfare-reform (of the mid-1990s) to take the glory from the Bad Orange Man, and we'd still have been dancing in the streets.

Why is he failing? Either he [Joe Biden] can’t do what is needed to be done, or he won’t do it.

The left does not want the illegals coming here. “Do not come!” was the message Harris gave the Guatemalans. But when it comes to the necessary toughness to stop the invasion, they recoil. [My bolding]

OK, now, that bold part truly makes me think Mr. Buchanan has just lost it. Because, Kamel-Toe SAID "Do not come!", we are to just believe that the ctrl-left doesn't want the illegals coming? That's simply laughable, unless they've change their mind just last month after 55 years of the opposite goal. They want to destroy traditional America, Pat! This had been a part of their efforts since 1965! As that border-control failure would say, c'mon, man!. They lie, Pat! Take that into account next column, and maybe you'll get a reader back.

* Who was definitely part of said quagmire.

** Hell, they don't even give the Red Squad members a reach AROUND when they screw them in the ass.

*** From this article, which I saw no point in reading, based on the title alone.

Like Mr. Buchanan, she was a woman equipped to live in age she had well outlived..

Moderator
PS: Was your Great-Great-Aunt a pundit too, Alarmist? Nah, I'm sure you meant that she had the same genteel(?) outlook as Mr. Buchanan.

That's not something I would have imagined on a sandwich. Does it come with any condiments?
The Alarmist
PS

Pat reminds me of my Great-Great-Aunt, who was born into the Victorian era and knew how to make the best cucumber and watercress sandwiches for afternoon tea.