Peak Stupidity hasn't had a Morning Constitutional in over 3 months. [That can't be good for ANYONE! - PS medical staff, Dr. Fauci and Uncle Salty presiding] We had promised in that last post, on Amendment XXVII, to write a conclusion about these 17 post Bill of Rights Amendments, ranging in American history from XI in 1795 to XXVII in 1992, after all that writing done about them - see all those links above. 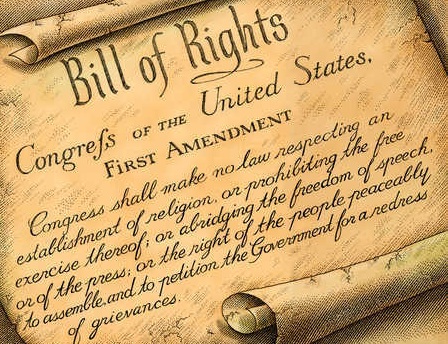 During arguments between the Federalists and the anti-Federalists (the original antife?) at the time of the drawing up of the US Constitution in 1789, objections were made by the anti-Federalists, such as Sam Adams, Patrick Henry, Richard Henry Lee, Elbridge Gerry, and James Madison (after his change of heart. The wanted to put limitations on this new US Federal government IN WRITING. 17 articles with the limitation that were written up were boiled down to 12 Amendments, 10 of which had been ratified by 3/4 of the States (14, then 15 at the end of this) by 1792. This was done per the Amendment Process itself, as stipulated in Article V.

Peak Stupidity has no objection to any of these 1st 10 Amendments. Without them, the Federal government would have likely become the Feral government a lot sooner than it did. Without that Article V Amendment process, the limitations on the new government would have had to been put into the Constitution body itself, something Mr. Madison and others were pushing for. More importantly, we may have been better off without Article V. Here's what we got out of it so far: 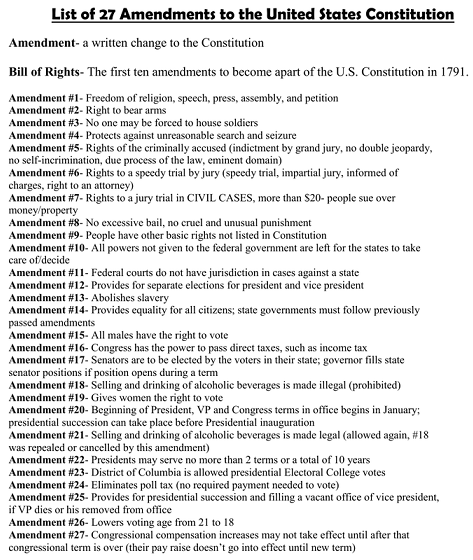 Yes, we are aware that these are over-simplifications in this graphic. It's a quick run-down, though, and, the Peak Stupidity reader may peruse the links above or go to our favorite Constitution site (linked to more specifically for each Amendment in our posts).

Of the Amendments, numbers 15, 19, 23, 24, and 26, that's 29% of them, expand the franchise to a bigger set of voters. See, this is a problem the Founders must not have anticipated. They were White, British (well the White, then, went without saying then), men. They somehow imagined they and their like-thinking progeny would be the ones carefully controlling this "dangerous servant and fearful master"**. Them more the franchise was expanded from property-owning White men (as decided by THEIR OWN States), the more voters there were who didn't care about this small government idea so much, and the more they would agree with expanding the franchise further. It ended up a big ball of cascading franchising stupidity. Not only that, but all these Amendments moved the power of determining who does get to vote from the States to the Federal government.

Three of the Amendments, numbers 12, 20, and 25 read as simple housekeeping - clean up of loose ends in procedures that were not thought out well when the Constitution was drawn up. However, it is questionable that that's what Amendment XII was only about. Then, there is Amendment XVII, which might seem like a simple change in procedure to those who haven't thought much about it, but actually takes away the States' power.

Amendment XXI was a good one, but that was only because it was not much more than a repeal of the ridiculous Amendment XVIII decreeing alcohol prohibition by the Federal government. (I wrote "not much more", because though #21 doesn't increase Federal power, Section 2 therein encourages more State authoritah.)

Many fairly young people may be surprised to learn that the last Amendment of the Constitution, Amendment XXVII, was ratified during their own lifetimes, in 1992. I'd forgotten about that myself until I wrote the post about it. It's also surprising that this latest one was one of the few and far between good ones***, actually resurrected from one of those articles discussed by the Founders way back in the early '90s, uh, that'd be the 1790s!. Well, it had good intentions anyway, stipulating that Congressional pay raises given via legislation can not apply to the Congress in session that made such legislation. Yeah, good intentions, but this would have been great for the first century or two of the country, not the corrupt government of today.

Does the pay really matter in today's world in which Congressmen and especially Senators make bigger bucks from donors for their excellent books and speeches made after the fact as payback for services rendered? As corrupt and anti-Americanss as the Feral Government is now, any decent Constitutional Amendment would have to be both proposed via State-called conventions, a very risky idea.

Is there any point in proposing and ratifying another good Amendment anyway? The Feral government officials ignore the document and the highest court doesn't even give a damn about it anymore.

I would have to say here, in conclusion from this long stretch of posts about the 17 post-BoR Amendments to the US Constitution, that our Founders really fucked up by writing Article V! Now, as written early, the 10 very important (during our serious period) Amendments were created via this Article V procedure. However, James Madison and other anti-Federalists back in those founding years would have rather incorporated these limitations within the document itself.

That could have been done nicely by including each limitation along with the appropriate Article/Section that it applied to. While they were at it, they really should have jerked out that stupid "General Welfare" clause out of those two intro paragraphs within which this touchy-feely language had been written. Who knew, though? Who of these wise Founders knew that the country would become full of people who took advantage of that language to supersede the clear enough, plain English safeguard they'd inserted as Amendment X - The powers not delegated to the United States by the Constitution, nor prohibited by it to the States, are reserved to the States respectively, or to the people.. Is that too obtuse for modern Americans?

Listen Ben Franklin, the reason we we couldn't keep it is because YOU PEOPLE inserted that "General Welfare" crap and Article V. Whaddya' think, the country would stay a patriarchal society filled with independent-minded White people from the British Isles? Oh, ya did? Why didn't you put some immigration limitations in there?

OK, that was harsh. What is now the United States was an unimaginably huge piece of land in the 1790s, and nobody told them there'd be days like these figured it could ever get to 350 million multi-cultural mess it is now.

Could good Americans possibly propose and ratify an Amendment that would nullify most of the 17 Amendments that Peak Stupidity has discussed during our Morning Constitutionals? It would have to have a final Section that also nullified Article V. Call it the Amendment to End all Amendment. For the geeks, call it "The Amendment Worm 1.0" OK, let's just hold off until Peak Stupidity proposes Amendment XXVIII in the next post of this sort.

*** It also had that great story behind the resurrection of the idea and the work done to get it ratified.

Moderator
PS: Agreed, Alarmist. #17 seems like a small housekeeping change only at first glance. We've all seen what this has done - remember the Hildabeast running for Senate from NY State as a reverse-carpetbagger?

I noticed that a lot of the worst ones were proposed and ratified close together about a century ago. What gives?
The Alarmist
PS

XVII was true poison to the Republic. In addition to that, it essentially created a US “House of Lords” that has less turnover than the UK House of Lords, which itself has been bastardized by the Parliament Acts of 1911 and 1949 which took away any say of the landed gentry to reign in the “democratic” pushes for gibs.

If the localities are denied proper say in the affairs within their own borders, then there is no reason for them to even exist, except perhaps as regional collection and distribution hubs.