Fudging the markets - What Could Possibly Go Wrong?

Oh, Fudge! Look who we got "running things". 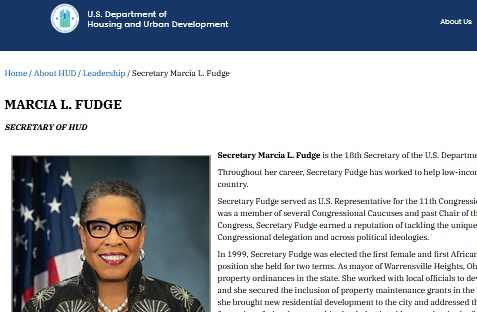 Zhou Bai Dien's pick for HUD Secretary is Marci Fudge shown above. It's that Fudge Factor that got her the plum job, I'm sure. HUD Secretary is a Black Position, period. White people wouldn't understand things like Housing and Urban Destruction , errr, Development, yeah that's it.

"Housing is important infrastructure.", the lady says. Other than in remarking that this stupid broad doesn't know the difference between private property and infrastructure, as doesn't the whole Bai Dien Administration, I'll leave her out of this post from here. This is more about the people that run the Fannie Mae's, Freddie Mac's and the like pieces of government Central Planning stupidity.

The title here was taken directly from this Steve Sailer post, as is the long excerpt from Politico that I'm including from that post. However, Mr. Sailer is not known particularly for free-market Conservatism, so he means that title in a slightly different sense. His astute (as usual) point is that the Bai Dien Administration sees nothing wrong with implementing a bigger version of the iSteve termed "Minority Mortgage Meltdown" of '07. I mean it in the sense that no Central Planning of the housing market should be implemented at all. Our Feral Government has been Fudging with the housing markets since Great Depression 1.0.

Here is the long excerpt from Politico's report on this by one Katy O'Donnell from July 7th:

WASHINGTON — President Joe Biden’s move to fire the top U.S. mortgage regulator is triggering calls from fellow Democrats to use the agency to expand access to loans for lower-income people, who have struggled to buy homes since the financial crisis.

… The president installed as interim director an agency veteran who says she’ll make affordable housing and combating discrimination a top priority, but who has underwhelmed those on the left, who say she is a mere caretaker.

Progressives are concerned that Biden will be too timid in changing course at the powerful agency overseeing Fannie Mae and Freddie Mac, the two companies that stand behind half of the $11 trillion U.S. mortgage market….

The pressure from the left poses a tough choice for Biden. Democrats for years have pushed the agency responsible for Fannie and Freddie to expand homeownership and narrow the racial wealth gap. But making mortgages cheaper and more accessible could also raise the risks of defaults and increase the odds that the companies would need another bailout in the future. Fannie and Freddie were seized by the government in 2008 to avert their failure during the subprime mortgage crash. …

While Biden has proposed a raft of home-affordability measures, having control of Fannie and Freddie might be his most effective tool.

The FHFA director “is the most powerful and consequential job on housing in America,” said David Dworkin, president and CEO of the National Housing Conference. “There is no close second.”

Dworkin and other housing advocates want FHFA to allow Fannie and Freddie to take on more financial risk — meaning more government intervention backed by taxpayers — in the name of expanding access to mortgages.

Among their ideas: Giving Fannie and Freddie free rein to purchase mortgages with lower credit scores, allowing private lenders to make more of those loans; cutting fees; and expanding investment that supports the construction of multifamily rental properties.

Advocates want FHFA to immediately do away with Trump-era limits on Fannie and Freddie’s purchases of “high-risk” loans — characterized as having some combination of low credit scores and high debt-to-income or loan-to-value ratios.

Allowing the companies to purchase and guarantee more of the loans could lead to lenders issuing more of them, which would extend credit to more low-credit-score, low-income borrowers without requiring higher down payments to compensate for the risk. Fannie and Freddie would pick up the tab if the loan defaulted.

… On her first day at the helm of FHFA, Thompson said she was committed to ensuring that the housing finance system operated “in a safe and sound manner” while keeping a “laser focus” on community investment. She said there was a “widespread lack of affordable housing and access to credit, especially in communities of color.”

Erika Poethig, special assistant to the president for housing and urban policy, said the administration is “committed to expanding access to affordable homeownership, especially for low-wealth borrowers and communities of color that face challenges in the housing market.”

“In the coming months and years ahead, we look forward to working with FHFA leadership to use the levers of housing finance to address the racial wealth gap, expand housing supply and ensure housing affordability,” she added. …

Mr. Sailer didn't have much to say about this one. He had one great line of sarcasm - "The equity agenda will inevitably focus on your home equity because, as Willie Sutton might say, that’s where the money is." You'll read good points in the comments about why this is all being done completely wrong. There's not much about how the housing market in the US can work right when the damn Government has been fucking with it in every conceivable way for most of a century! Here's my take on it:

That 4th paragraph about the "tough choice" the stupidity in a nutshell. It’s a tough choice, see? You can screw around with the markets even more than the Feral Gov’t already has, in order to force prices and sales to where they benefit the poor money-challenged Americans that you’d like to favor. However, it sometimes takes a while, but often when you screw with one part of a market, the damn basic economic laws start kicking in and messing your plans up. It’s tough to get it right, or at least have it go right until you are out of office, so the damage to the economy can be blamed on someone else.

Thinking that one can do Central Planning and the disregard for the handful of basic immutable economic laws that must come with it takes a lot of hubris. OK, it’s a mixture of hubris and stupidity, and the amount of it in these would-be Communists and the real Communists is amazing to me. They really think that people with a different ideology really just don’t want to help people. Those other people, the Conservatives, Libertarians, and such, just must hate people, because they don’t want to use the great power of the Government to help them. They are just plain hateful!

So, like Lenin, Stalin, and Mao before them, these modern Central Planners will again put that heavy Government hand into the markets, this one being one of the biggest. When you do this, you face those tough choices about which moves will trigger those damn economic laws again. All you can do is take a deep breath, build up your hubris level, and you try A, then, if it causes havoc somewhere, somehow in the economy , you try B and A, then, if that doesn’t do the trick, you add C to A and B, and so on, all the while crossing your fingers and hoping for the best. It’s pretty tough, I’m telling you, but if you’re gonna make things fair, you know … you gotta break some markets, errr, eggs, that is.

Seems the media was a little more honest in 1943.

☮
Moderator
PS: They may even let us paint our rooms, Alarmist, in our favorite colors. And, we'll be happy with it.

Mr. Smith, I read the short article/blurb under your link earlier today. That works out to less than $4,000 for each "home". They'd probably be glad if I painted my room in my own colors, just grateful if I don't shoot up and shoot sideways. I have a lot of extra shoe polish, so I wonder if I could get in on some of this housing action.

“To the public controversy over how much new Government-building housing should go to Negroes, the Federal Public Housing Authority last week added a fact: the Negroes' share in the present building program is 12%. The Government is building 88,000 new units for them at a total cost of $360,000,000.”

☮
MBlanc46
PS You’re overthinking it. It has nothing to do with economics, planning, etc. It has to do with Houses for Negroes. Negroes have fewer houses per capita than do whites (forget about the Chinese, .Indians, Mexicans, etc., they don’t count). That’s Systemic Racism! It must be fought. They haven’t yet gotten to the point where they can just appropriate your house and give it to Negroes. You’ll have to wait for the second Harris administration, or even the first Ocasio-Cortez administration, for that. For the moment they have to cobble up some “program” to provide Houses for Negroes. And you’ll pay for it.
The Alarmist
PS

The department of Harassment, Uncertainty, & Doubt.