Ann Coulter on the attitude of the Globalist elites 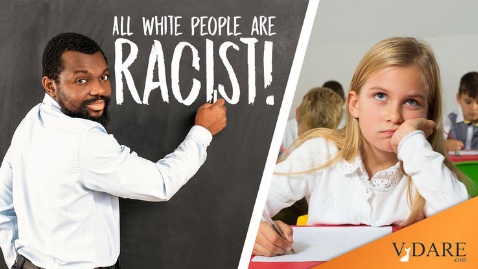 With no time to write much of a post today and tiredness setting in, I will publish this quick "lookey here!" post to the most recent Ann Coulter column. It can be read here on VDare. VDare's title is Ann Coulter On Anti-Populist Elites: NYT—Why Are All These Racist Losers So Angry? Even for Peak Stupidity's favorite literary pundit, this column one of the best.

I'll excerpt here the mid-section of the column, in which Miss Coulter is referring to the bilge out of some Globalist NY Times columnist named Thomas Edsall:

But ever since the 2016 election, there’s been a frisson of viciousness to the elites’ usual contempt for ordinary Americans. Never mind that Trump ended up betraying his voters. The establishment is appalled that the issues he ran on were popular. Five years later, they still sputter in rage, unable to comprehend why Jeb or Hillary didn’t end up in the White House.

To explain this calamity, Edsall rolls out all the Timesian cliches about losers being upset about losing. He calls this the “ubiquity of loss,” as if we’re talking about a natural phenomenon, like beach erosion.

Trump voters, he says, are people who are angry about:

* their inability to achieve “a standard of living as high as that of their parents,”

* “the decline of the gender pay gap … and other types of loss relative to women,”

* and losing “employment and earnings to China and other countries.”

Edsall acts as if these things are immutable laws of physics. Actually, they result from the deliberate policy choices of our ruling class to benefit some Americans to the detriment of others.

Specific policy decisions were made to import an endless stream of low-skilled workers. Employers got boatloads of cheap labor, while ordinary Americans saw their wages plummet.

Specific policy decisions were made to explicitly discriminate against white men in order to give jobs to women, simply because they were women.

She even went THERE! (That last part.)

If you don't read Ann Coulter regularly, I highly recommend doing so. She is not the pro-GOP part-Neocon she was 20 years ago. Ann Coulter has grown in punditry.

Thanks, but there is no need for sorrow. It's my own fault for clicking through.
And, as you say, someone needs to know what the enemy is up to.

Brown vs. board of education causes climate instability and puts White bodies at risk by bussing too many stupid mean black kids into formerly peaceful white schools.

☮
Moderator
PS: I am so, so, so very sorry to have steered you, even if indirectly to the source of the bilge, the NY Times, Adam! OK, well, someone needs to know what the enemy is up to - better you than me, Kemosabe.

Now that you put it down, I see that the Jack Goldman character brings up "climate instability". Yeah, that's one of the newest terms of endearment, errr, stupidity, out of the SCIENTIFIC left.

Right! See, if we didn't keep getting thunderstorms and a long lack of thunderstorms often, and no snow, or too much snow, and those ice storms and warm winter weather wonderland stuff, people could GET SHIT DONE. We need to go back to that steady 3" precip./month, light rainfall with the temperature varying only a degree or two during each season, you know, like we had in the olden days. Hell, I didn't have to walk to school in the snow both ways uphill back then. Now, the kids do, dammit, because ...

Thanks for linking to this article Mr. Moderator. Good stuff. Miss Coulter has apparently grown up since her pro-war/neocon/fox news pundit days. She does a pretty good job of fisking this Edsall character. I agree with her assessment about the viciousness of the elite in their contempt for ordinary Americans.

Why Are All These Racist Losers So Angry?

“Globalization, concentration of capital, rapid population growth in poor countries, technological change (robots and digitization) and climate instability have all produced higher inequality, surges of international migration, and put stress on farmers, workers, craftsmen, and rural/small-town populations while concentrating growth and opportunity in the major metro areas of O.E.C.D. countries plus China.”

“These trends have left hundreds of millions of people in countries from India and Brazil to the U.K. and the U.S. resentful that the stable, prosperous life they expected has been taken from them. As a result, many have turned their anger against foreigners, minorities, and elites who they blame (with elites, rightly), for promoting changes that benefited themselves and neglected them.”

Which seems to me like a reasonable answer to the question at hand. Formerly middle class people are understandably resentful that the stable, prosperous life they expected has been stolen from them by their criminal overlords. Edsall never really gets into affirmative action and other dysgenic benefits packages that are bestowed upon some at the expense of others, though the piece does cryptically allude to such things.

The rest of Edsall's opinion piece is chock full of neoliberal newspeak about the importance of global cooperation when it comes to dealing with pandemic response, climate change and trade as well as the proles anxieties about economic dislocations, status reversals, and immigration which have fueled the rise of authoritarian and illiberal regimes that are undermining democratic norms blah blah blah, etc.

Anyway, thanks for the link to Miss Coulter's thoughtful times rebuttal.

I hope you all have a great rest of the weekend.

☮
Moderator
PS: About Russia, we wanted to visit the place in '18 or '19, but the US Airlines' direct flights were already gone by then due to US Feral Gov't induced bad relations.

I want to see St. Petersburg (in the summer).
The Alarmist
PS

We got ripped off in the election: Trump was merely the imperfect vessel through which the forces of evil poured their scorn on us.

I was once asked when I would return to the US to stay: I replied, “When the Republic is restored.” Little did I know at the time that the rest of the Western world was going to follow the US down the globohomo toilet. Good thing I learned a bit of Russian, I guess.
Moderator
PS: I don't head over to Taki's site so much anymore since he changed the format. That just irked me. I think there's a writer I used to read who is not on there anymore also.

I don't know why only some of Miss Coulter's columns appear and not others. I would think when you paid for a syndicated columnist's stuff, you'd get every one. I know VDare published them all, so that's why I end up reading here there. (Too bad there's no commenting, and/or she doesn't appear on unz.com. Taki's used to have commenting, but I didn't like the commenting format, and some of those commenters bored the hell out of me with arguments on minute historical points.)

Oh, yeah, Miss Coulter was as disappointed as the rest of us by Donald Trump. She supported him pretty well though, until all her hopes had been dashed.

I do think Trump got ripped off in the election, but so have lots of people running against the D-squad cheat apparatus. The guy only seemed to really care or try to do something about some issues only when it became personal - such as with the big "TECH" censorship. He got serious about this issue after almost the entire 4 years, in Oct. of '20. #Stupid
Dieter Kief
PS - Ann Coulter is better than good, I'd say. I like her (writing!) style a lot - dense, witty, fresh. Just why is she at times published by Taki Theodoracopoulos, and at other times: Not? What is Mr. Theodoracopoulos doing here? Anybody an idea?
You left out the part where she talks about a "psychotic, coming down the escalator", Mr. Mod. This part is spectacularly direct. Trump is dead for her. As skunk at the roadside. Definitely not fair this. Very straightforward too. Make no prisoners. Let this psycho dream on about winning the 2020 election in retrospect. This is all over now, Big Old Trump Fart Baby Blue.