Free as a Byrd now- Black Privilege on display: 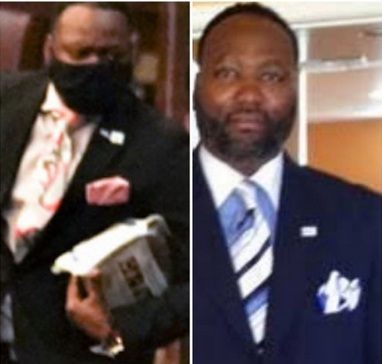 I watched a clip of Tucker Carlson talking for a few minutes with Ashli Babbitts widower and the guy's lawyer. You can watch the clip on Gateway Pundit's post about the murder here.

What's interesting is that not a one of these three men would name names, when the name could be determined after a simple search after their discussion. What they did note is that the Capitol cop who shot Mrs. Babbitt from close range in the neck or head is the same one who was in the news in February of '19 for mistakenly leaving his gun in a Capitol restroom*, with no punishment allotted to him. (He was black, you know, so ...) See, here's the weird thing: the name of the absent-minded Capitol cop from '19 is KNOWN. His name is Michael Leroy Byrd. It's a simple step in basic logic to move from "we know the guy that left the gun in the restroom" and "we know that the guy who murdered Ashli Babbitt is that same guy", to a big-ass headline saying:

A blogger/pundit Conservative activist who was right there in the Capitol when this happened, one Tayler Hanson, has either broken or is trying to break this story. I can't believe I'm linking to a twitter page from some Millennial with a misspelt first name, but that's the way they do it now - His page here is worth scanning through**. I see this Mr. Hansen as a brave young patriot trying to get through a media blackout on the simple important very-easily-determined fact. It ain't a "Who shot JR Ewing" mystery. Hell, he was tweeting about this murderous cop back in late April, 2 1/2 months ago!

Your Peak Stupidity blogger happened to run into a member of the Capitol Police Department while traveling a couple of months ago. This guy was very nice to spend the time to talk, as he was on the way from some guard-a-CongressRat detail. I asked him about the deceased Brian Sicknick, and this guy happened to know him quite well.*** I was hesitant, due to the politics, and that this guy could be considered a customer, but I did ask him "do you know the guy that shot Ashli Babbitt?" He said yes, but he didn't know him well at all. There was no way he was going to give me a name, so I saw no reason to put him on the spot by asking.

That inside information wasn't given to me is to be expected. I'm not an internal affairs investigator. I'm no beat cop asking questions. I'm no Grand Jury, and I'm especially not a Congressional investigative committee. How come there ISN'T one of the latter, for that matter, seeing as the normal police investigation and arrest process has simply not occurred? You had a guy shoot and kill an unarmed woman from 10 ft or so, while other cops were right nearby with rifles, getting along just fine with everyone, and NOTHING HAPPENED! Again, this isn't some mystery that requires the services of Jim Rockford or the 5-0.

This is USSR or Mao-era China behavior here. I wouldn't have expected it in America.... so soon! On the other hand, we have that free and independent press, right? For some reason, they all are independently deciding not to look into this story that even a Journalism major could figure out. Apparently, the information about the culprit of a high profile murder right inside the US Capitol is not part of the news that's fit to print.

Then there's the race angle. Were it a White man who murdered Ashli Babbitt, the Capitol Police might have thrown him under the bus "unit". A black man can get away with shooting an unarmed White woman dead, and, well, yeah, but ... we don't want to get called names or anything ... She's just dead, so we should get over it.

Or, is this really something bigger, with the Deep State and Feral Government having decided to teach us a real lesson here? Anyone does something like this again, and we will just shoot whomever we want with no repercussions, lock others away for months and throw away the key, and create a widely-spread narrative that this simple slightly out-of-hand protest or minor riot was TERRORISM and a threat to the US Constitution, Dammit! (Like they give a shit about that document.) In the meantime, other groups, on the correct side of the ideology, can do much more serious damage with no one spending a single night in jail The Anarcho-Tyranny is palpable.

What is this teaching us? The lesson many patriots will learn is that if you're going to raise a little hell, you may as well go all out and raise a whole lot of hell. There will be lone wolves at some point. Michael Leroy Byrd ... well, I'll stop here.


* This news can still be found, as there was no effort to hide this smaller story - see this Fox News story, with the name Michael Leroy Byrd right out there.

** This page by The Deplorable Patriot is a bit more like a story than that series of tweets.

*** It's not part of this post's discussion, but more pertinent to the one just linked-to, that, in answer to my question or musing, he said that he didn't know of his friend Brian having any medical condition. In writing that post, I'd read that Mr. Sicknick had a heart condition. Would a friend not know that? That IS possible, though, as when you have a job that could be terminated due to medical problems, you may very well hide a problem from everyone. (Even a friend might accidentally mention it at the wrong time.)

This post of mine was from mid-February, so almost 5 months ago, well before I talked to this other Capitol cop.

Moderator
PS: Mr. Smith, a comparison to the treatment of the dead (one way or another) reprobate George Floyd is to be the subject of a follow-up post. There are plenty of open and shut murder cases that result in more lenient sentences than what Mr. Chauvin received. He is basically a political prisoner.

I agree with your take on Derek Chauvin too.
Moderator
PS: Mr. Ganderson, it took me a minute to remember who Dennis Becker was. Yeah, Angel will be of great help as always. "C'mon, Jim, ya gotta' help me, man!" Great show!

I hope you do write, but I doubt you'll hear back. If you do, I want first dibs on the posting of the stupidity you'll receive. I hope you're having a nice vacation.
The Alarmist
PS

This and all others noted below are evidence we have a MOG.
Robert
PS: Thanks for this, Mr. Moderator. I am trying to stay away from the news, so have not been following any of this.

Re: 'Or, is this really something bigger'? Yes. Charlottesville did not work, so this is the next step.

We can take heart from the lesson of the Taliban. The food producing regions, when even moderately armed, if persistent, can defeat the cities.
Adam Smith
PS: Good morning Mr. Ganderson...

When you wrote “I listened to Greg Cochran on Jim Miller’s podcast on my drive to OH yesterday” on Monday, I had my suspicions. You confirmed them for me today with “Went to the Twins’ game at Target Field on Tuesday”.

Did George Floyd, peace be upon Him, play for the Twins or something?
Since when do random criminals get a placard in a stadium?

Chauvin might be a jerk or an asshole, I really don't know, but he's not a murderer. He is guilty of bad optics as he picked the wrong time to kneel on a jogger for 9 minutes in front of the cameras while St. Floyd the Breathless succumbed to the Fentanyl.

I agree, Chauvin's sentence is as ludicrous as was his show trial. There are many cops who have done much more harm than this Chauvin guy who have not, and probably never will be, held accountable for their crimes.

When will Daniel Shaver's widow get her $27 million payout?
When will Philip Brailsford be sentenced to 22 and 1/2 years for murder?

Will Ashli Babbitt's family ever get their compensation?
Will Michael Leroy Byrd ever be sentenced to 22 and 1/2 years for murder?

I hope you enjoy your vacation Mr. Ganderson.

☮
Ganderson
PS ( can anyone tell I’m on. Vacation?)

Not that I believe he is guilty of anything, but even if one accepts that Floyd died due to Chauvin’s negligence the sentence is ludicrous.
Ganderson
PS.
“They need to get Dennis Becker on the case, or at least Angel Martin”

I shouldn’t joke about this- it really shows how our rulers operate. When St. George met his demise last May it was cries from people in authority, no less, MURDER! POLICE BRUTALITY! etc, but with this, crickets.

I notice, too that no one other than those in our thing has commented on the extremely disproportionate sentence meted out to the hapless Derek Chauvin, who has become a Emmanuel Goldstein type character.

Went to the Twins’ game at Target Field on Tuesday- they have a placard in right field “George Floyd, 1970-2020”. I’m going to write to the club and ask if there might be some room in the outfield for some other notable dead Minnesota criminals to be memorialized- perhaps Homer Van Meter, known associate of John Dillinger who was shot by the cops in 1934 at the corner of University and Marion in St. Paul. Or George “Bugs “ Moran, who went to my St. Paul high school for two years before he was kicked out, and moved to Chicago’s North Side. Come to think of it, Chick Gandil was from St. Paul…
Ganderson
PS.
They need to get Dennis Becker on the case, or at least Angel Martin
Mr. Anon
PS

Forget it, Jake, it's Chinatown Washington.