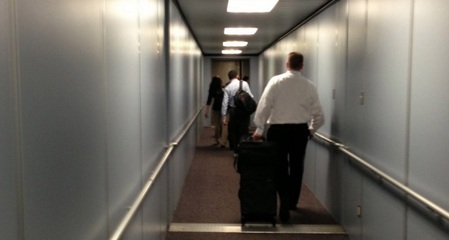 These posts pop in my head out of almost nothing sometimes. In this case it was just a few words said by a lady being wheeled up the jet bridge into the airline terminal.

There's probably a special section of building code for it, but these airport jet bridges must be limited to a certain maximum slope. To embark on one of the big birds, one often goes up slope, while the people going off need to go down ... down to the customs/immigration* hellhole. For the smaller birds, usually you go down slope to board, and uphill to get into the gate level of the terminal. As hooked up to a 757, they may be fairly level, if it's a fairly small terminal, as in not so high off the pavement. These jet bridges come in an amazing number of configurations. Additional length can be used, of course, to decrease the slope.

The slope is important not just for ambulatory passengers, but especially for the wheelchairs. I noticed a blue-died-hair lady getting help off the plane in a wheelchair the other day, still near the bottom. (It was a regional jet.) First of all, she was not that awful old, maybe 55-60. She could have had lots of misfortune, but more likely she was diabetic. That blue hair thing just put me off, for that age, I mean. Geeze, what's that about, is she planning on going to some raves like that? Anyway, that's not the point here, but it made me look and pay attention a bit.

Now, I have helped a few people off the plane and into the terminal by pushing them in wheelchairs up top. I have pushed people weighing 300 lb. even. I was glad to do it, but it's a quick cardio workout, let me tell you. With these chairs with nice bearings and rubber tires, it's all ΔPE = mgΔh these days.

The small airport terminals may have 2 or even just 1 person available each shift to do this work for all the gates (along with other passenger service chores). In this case the airport employee was a smaller lady. She had blue haired mama pointed in the right direction there, and was pushing hard to get her going.

All I heard as I went by was the passenger in the chair saying "are you sure you can get me up there?" Now, see, I'd bet money that a lady looking like that had leftist, feminist, and PC tendencies. She would likely be the first to tell you that there are no "man's jobs" and that women could do anything at all just as good, and often better, than a man could. She shouldn't be questioning or bothering this small female employee. She should be glad that a woman had taken that airport service job. Gyrrlll power!

However, her ass was on the line here. If that wheelchair tipped over going over one of the joints (they are steeper), or worse yet, got released and headed back down backwards or forwards, it would be a bad day** When it becomes real, and you're worried about your butt getting busted, oh, all that PC, feminist crap goes right out the window. "Are you sure ...?" Hahahaa! Enjoying the ride?

* As I've written before, it's a GOOD thing for a country to have tough-asses in the immigration hall though.

** With the help of a good lawyer, it would be a bad day for lots of parties, the assisting employee, the airline, the airport management, the jet bridge manufacturer ... and I'm sure I'm missing a few parties to be held responsible to make this lady whole.

I hope this message finds you well...

“What is the masculine of authoress?” - Lol... Thanks!

☮
Robert
PS: Mr. Smith, thanks for the link. The article was indeed coherent and better than I expected.

P.S. Also, thanks for the use of 'authoress'. If you type authoress into the fount of all that is true, Google, one of the ever helpful prompts given is:

What is the masculine of authoress?
Adam Smith
PS: Hello again...

The authoress (Victoria Song) of that piece sums up the “you will own nothing and be happy” situation near the end (In case you don't care to read this drivel to the end. I'm a little surprised that I did.)...

“The scary thing is that only sounds terrible if you have the mental energy to care about principles.”

O/T, but part of a recurring theme...

☮
Moderator
PS: I remember that comment of yours, Alarmist. We sure let ourselves get taken advantage of. As for that lady, I don't know if there's any additional charge for the wheelchair service, but I've seen the passengers tip the employees from a buck to 5 or 10, depending. Sometimes there's a long way to go in the big hub airports that don't have the golf carts - see, speaking of golf carts.

Sounds like a really Physical Training regimen there for your crew chief and his team, haha.

At least the disc (frisbee) golf people walk the links. There's not too much to carry, but the serious players do have about 10 different discs on them. It's nice, because lots of it is woods.

Doubly-masked on a scooter in Wal-Mart is no way to go through life, son.
The Alarmist
PS

I call it R2T ... everyone seems to have a right to travel, at least until they don’t, but as long as they do, society has a duty to make it as painless as possible for the lesser able, regardless of the costs to the rest of us.

I’ve commented a few times at UR about arriving in DFW and walking past 20+ wheelchairs, each manned by South Asians (almost all are pushed by men) waiting to pick up the elders of a south asian village sitting in economy and arriving with at least another hundred or so south asians looking forward to starting their new life in the USA. I think I preferred it when they were offshoring jobs to Bangalore rather that on-shoring Bangalore to the jobs.

But your posts reminds me of today’s trip to ... gasp ... Walmart, where I crossed paths with several persons of size riding the mobility scooters, most of whom were dutifully masked, which I guess they should be just so the hypercapnia can further short-circuit their understanding of how the world and biology really work.

Fun fact: In the 1980s USAF, we were authorised to knock off for an afternoon each week to do some form of sport for PT. Golf was an approved sport. The first time I headed out with my crew-chief and his team, I was ready to walk the links with my bag, but then he rolled up in an electric cart with a cooler full of beer. I didn’t complain, just filed that into the folder of future unintended consequences. One of the last things I did on Active Duty was to certify his barely passing the annual fitness test which, by virtue of his advanced age in the mid-30s was to walk a mile and a half in some absurd time.

America grew so fat and out of shape in two ways: First, gradually, then rapidly. I still walk the links.