LittleFreeLibraries in the leafy neighborhoods 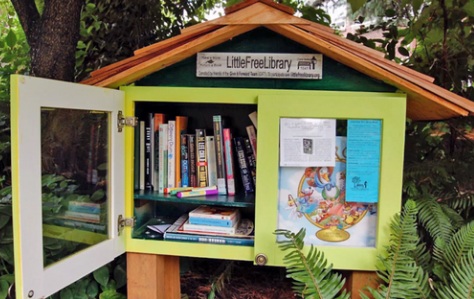 In the latest (June) John Derbyshire's monthly "diary", as published on VDare and on on the Unz Review, with comments, I got another book recommendation. He hasn't let me down so far with the handful of books I read per his advice or suggestions.

What I noted is that Mr. Derbyshire got this latest book that I'll pick up from one of the "Little Free Libraries".* I am not sure if every reader will be familiar. There are lots of these cute and neighborly volunteer built and operated** things around, such as the one pictured above. I started seeing these ~8 years ago, by my recollection, but per the FreeLIttleLibraries website, it's been 12 years since the altruistic and creative Mr. Todd H. Bol made the first one. It says there are over 100,000 of them in people's front yards all around (occasionally at a part too).

We have the Little Free Libraries all over my neighborhood too. Most have either books for children, which we’ve taken advantage of on probably 10 to 15 occasions, or some self-help books, women’s novels, and lefty stuff. I did find one book on sailing I liked that I’ve been carrying around for a while.

There’s lefty stuff, mildly that is, not Das Kapital or Mao’s book, because there is a lot of that woke stuff going around the neighborhood. I think there’s a silent majority, but we’ve got our share of BLM, “We Believe”, etc, signs.

This Little Free Library thing was a great idea, I gotta say. There's the "sharing economy", as it's called, with your AirBnB's, Ubers, urban rent-a-bikes, etc., so I guess this is a "sharing charity" operation. No matter the BLM signs on the lawn of one of the Little Free Library volunteers near us, they've got to inherently know that:

a) This is not an idea that could possibly have originated from anyone other than a White person, such as Todd H. Bol.

b) Even if thought of by someone in China, Latin America, or the black ghetto in America, it would be dismissed out of hand, as who is going to build that nice dollhouse-looking structure of wood, mount it on a 4x4, and put some books in for the taking, knowing that the contents will be just all grabbed by someone and his handiwork will be vandalized soon enough? Oh, and where's the money in it? What would the point be, if there's no money in it?

c) Not so many people in the BLM movement even read books.

Oh, and these Little Free Library people have a "read in color" section on the web site. But, of course! You can sign a pledge on the internet that promises you will "share diverse books". I'd love to do that, putting an Ann Coulter book or a Vin Suprynowicz book called Send in the Waco Killers in that neighbor's Little Free Library for some diverse views, but I'm afraid that neighbor will trash it before it has a chance to get read.

* Mine is coming from the free! county library, free, as in is running off of that 80 million or so dollar bond issue they needed to renovate a bunch of the branches and the main one that all looked perfectly fine to me before.

** Basically just keeping things orderly if the users don't, adding some books here and there, and painting or replacing a nail or latch occasionally,

Moderator
PS: Yeah, I hate throwing perfectly good stuff out too, so that sounds like a great idea. I haven't seen any Rush Limbaugh or Ann Coulter books. I should put a note in to ask the owner to put one on hold for me.
The Alarmist
PS

I don’t think I’ve seen one of these in my neighbourhoods in Europe, but sure enough, there are a few of these. I’ll have to stock them with a few dozen of the English-language romance novels my wife is hooked on.