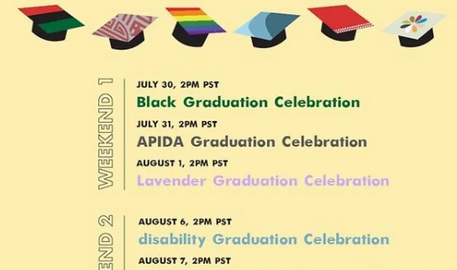 This post turned from a straightforward "look at this shit!" post about more wokeness at a university (well, what else would you expect) into a curmudeonry post. That's a genre, if you will, that Peak Stupidity has laid off of to some degree. (It was one of the most active Topic Keys at the start this blog.)

The blog Campus Reform, linked-to a lot by Glenn Reynolds and the Instapundit gang, does a decent job of documenting stupidity on campus. VDare's James Fulford posted Chapman University Holds Multicultural Segregated Graduations, Including "APIDA"—But None For Whites, Of Course with reference to the C.R. original.

I start reading some news, and I want to know WHERE it happened or is happening. It's one of the 5 "W"s of Journalism* for cryin' out loud! It may just be me, but I can't listen to any story told verbally to me without early on knowing where it happened. I have to interrupt people, even if only for 3 seconds, to find that out. It's a male thing likely, as we need those visuals in our head to think.

Neither the Campus Reform article nor James Fulford's post mentions where this Chapman University is located. It's not as if this place is widely known. Maybe Campus Reform expected readers to know, but I doubt that, and VDare is not all about universities. Each one could have spent 10 seconds lookng this up if they didn't know. I would give them a break on Harvard, or better yet, the University of California - San Diego. (Is that where Grant's tomb is? I still want to find out who's buried there - people keep asking me...)

OK, well, this is not just about these 2 articles, or this would be pretty nit-picky of Peak Stupidity. I see it a lot on-line, The worst perpetrators of this media stupidity are the TV news sites. I try to avoid them simply because most of them have pop-up, flashing crap up the ying-yang, making me wait a couple of minutes before it all settles the hell down. Sometimes, they've got some stories I want to read, mostly local to the station/website, with more and more current details than the big outfits.

I look at the station call sign at the top. Sure a call sign starting with "K" means west of the Mississippi River (I think?), and "W" is for east of it. Well, that doesn't narrow it down much. They show the weather usually, so I can tell that it's not Minot or not Sarasota. That just doesn't cut it. I need to imagine the place before I can understand. I'll look all around the front page, once it settles the hell down, and mostly find nothing. They've got to know there is google/bing/duckduckgo/etc. out there for which people from out of town can find their stories. I end up looking up the station location by call sign!

What's the problem with people? Are there really people who don't care where it happened? "Something happened. Here's who, errr, if he's not black.. Here's what. Here's when. Here why, at least as it fits our narrative. Here's how. Where? You don't need to know that.". I just can't think without a location. Perhaps this is another young-people thing. "What do you mean, where? It happened on the internet, that's where. Duh?!"


PS: Oh, what ABOUT the graduation ceremonies at Chapman College in Orange, California? I may write another post on that.


* What they do now is concentrate way too much on the "why". Every story has an opinion in it. "Man shot by teen in robbery gone wrong: White people must be responsible." Then, the "who" must be hidden much of the time.

It was a temporary area in which they further screened people who they would ordinarily turn back unless those people had good reason to show up on our shores. In my wife’s case, she was permitted to enter by virtue of being my spouse. A German dude next to us was here to join the crew of a cruise vessel, but they wanted to confirm his paperwork. Most of the people with us were South and Central Americans or Caribbeans who did not have permanent residence but had visas of various sorts, probably coming back from a family visit in the home country.
Moderator
PS: Ah, Alarmist, that was seriously confusing, doing the K/W backwards for nautical call signs. I always learn something here. (I had a family member in broadcasting, so I do know a little.)

I was about to ask where you traveled to, but your last paragraph straightened that out.

The thing about the immigration people, with whom I've had a problem in the past (this was the Canadians though - they have a problem entering a note into a computer, apparently, so I'd get the same rigamarole each time) - is that I think that's one group that'd I'd rather see being tough-asses.

Then you find out about the corrupt ones, not to mention the southern border, and you do wonder "what's the point?" Tell you what, the Chinese do it right! (I may have put that quick story up in another post - if not, that would be a good one.

Oh, were you quarantined or just in a holding area for a while? I thought you first were just writing about the best hotel you could find in New York City. ;-}

WBAP in Dallas ... plus other TX stations.
The Alarmist
PS

The current dividing line for K & W call signs is indeed the Mississippi, but it has moved around a few times since the early days of radio; plus there were interactions with the assignment of ship callsigns (which were W in the Pacific and K in the Atlantic and Caribbean), so you got W/K (Terrestrial/Nautical) issuances the east and K/W in the west. There are interesting outliers because of this history, e.g. KDKA in Pittsburgh, and WBPA in Dallas.

I decided to break out of Gitmo Central Europe for a few weeks. I can’t tell you how nice it is to walk into a restaurant sans mask and not get dirty stares. My wife wore her mask going in, but took it off after getting dirty stares; she couldn’t help pointed out that the wait staff were wearing masks, but I pointed out that the line cooks working in plain sight were not.

I’ll have to tell you more sometime about being in “immigration jail” for a half hour because Europeans are still not welcome in the USA, spouses being exceptions subject to further examination for their reasons to come to the USA. My wife was particularly impressed that I could distinguish the accents of Cubans, Nicarauguans, Dominicans, Colombians, etc. If I get COVID, or something else for that matter, it will probably be due to DHS confining us in a poorly ventilated room with the denizens of the third world looking for a better life in the USA. It is fascinating that the first language of announcements at MIA (KMIA in ICAO) are Spanish, then followed by English.