OK, that's gain of function. This term sounds like it was made to not mean very much. I am not in the science of virology, so maybe it has more connotations for a virologist, but how about something like "Deadliness upgrade" instead? That's what it is, changing viruses that originally only harm animals into ones that can harm and kill humans. Is "gain of function" purposefully obscure so that the public will not wonder "just why the hell are people doing this?"

Peak Stupidity wondered* back in our post Nicholas Wade on that Wuhan lab and origins of the Kung Flu why this gain-of-function research is being done at all. The author, science writer Nick Wade asked the question too.

The stated purpose, per that article, is to mutate or recombine the virus for reasons of being able to develop a vaccine that could fight such a virus. It's not just that Wuhan lab that does this work, and it's not just on these specific SARS viruses. There are labs that do the same for flu strains. I just don't get it. Why take the risk of handling the newly developed strains that are harmful to humans, just for the chance that they will develop naturally and people will need a vaccine? If it takes lots of work in the lab to make this mutation happen, what's the chances that it will develop naturally and require a vaccine? I don't know - I'll ask a virologist next time I meet one.

It seems the risk of gain-of-function projects outweighs the benefits. Then, when I read about Dr. Anthony Fauci and his putting money into the Wuhan lab for this research in cooperation with the Chinese, I wonder more about some truly evil intent, right under our noses, in plain sight. We do tend to give away technology to the Chinese left and right, but with all the animosity between the countries, would American researchers give away bio-weapons technology? That's what this is. There's no difference between gain-of-function research and bioweapons research other than the names of the labs. If the American and Chinese "authorities" are cooperating on this, who is their common enemy?

Why do you go about taking chances that may result in a real life version of Contagion? 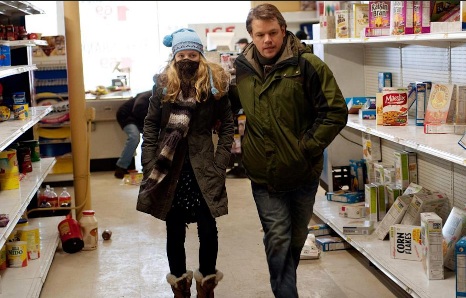 @Dieter Kief ... wow, Rock ‘n Roll royalty and Lauren Bacall ... she was a bit old by the time I came of age, but still a fine looking lady in her day, although in my days my thing would have been along the lines of Grace Kelly.

The best I can do along those lines is having said the line, “It’s a f*****g buffalo running around a f*****g field,” to Bono (I heard him say it earlier when I walked by unnoticed) that convinced U2 to make a second version of the music video for “One,” and I once played pool with Lucy Lawless (I had no idea who she was, so I probably came across as an ordinary guy rather than a Xena Warrior Princess fanboy). No introductions were involved, however; the thought that Randy “Short People” Newman could introduce you to Lauren Bacall is intriguing.
MBlanc46
PS Weapons, obviously. Why be cooperating with the Chinese on this is the big question. Perhaps because there are legal constraints* regarding doing that sort of work in the US. And, other than Donald Trump, Those Who Rule Us seemed to be (and probably still are) of the idea that the Chinese are our friends. Or their friends, anyway. I find it hard to believe that the Chinese share that idea, but what would I know?
The Alarmist
PS

“An array of nanoferrite-infested cells that crossed the blood-brain barrier would be effective receiving antennae at the top of the 5G band... just sayin’.”

“How a signal would get converted to interact with the brain I don't know, but maybe those schitzoids are onto something.”

This happened to me, one time, when I was probably about 12 years old. At the time I wore braces. I was trying to sleep and I heard music in my head. Hearing music in my head is not unusual for me as I'm a musician. But this was different, the music was quite faint. Then I realized that I did not know the song I was hearing in my head, and I wasn't making up a new song either. It was like I was listening to the radio. Then it cut to commercials, and then an announcer, and then another song. It only happened for maybe about 10 minutes and I never figured out what station it was. Perhaps I was laying at just the right angle that my braces acted as an antenna and somehow the interaction between the minerals in my teeth and braces rectified the signal like some sort of crystal radio, or something. That's the only explanation I can imagine. I swear this is a true story. I really do not think it was not an auditory hallucination or a dream, though I suppose it could have been.

“If the American and Chinese "authorities" are cooperating on this, who is their common enemy?”

I guess we all are.

It seems that deagle has taken down their forecast. Fortunately we have the way back machine.

Why on earth would deagle forecast such massive population declines in so many developed countries?
Will the sacramental needle cause antibody dependent enhancement in a large portion of the population?

“Do we really know what’s in those “safe and effective” vaxes?”

☮
Moderator
PS: Yes, I should have made that clear, Mr. Anon. I'll change it now, using the word "authorities".

Mr. Kief, ha, that Kinks song should have been in that NHS post.* Thank you for the reminder of it. That one is on the live album that I have, come to think of it. As for Mr. Hail, there's nothing new on his site - that is since the end of February. I hope to hear from him soon.

Alarmist, that nano-ferrite particle antenna stuff would be something else. How a signal would get converted to interact with the brain I don't know, but maybe those schitzoids are onto something.

I always lean toward the people in power being dumbasses drunk with power rather than technical wizards. With the vax, you've got this new untested development, and government officials with degrees by their names figure that means they know what they're doing and the people should just shut up with those objections and listen to their betters.

I'm not getting this shot.


* To go along with it, one should consider Dire Strait's "Industrial Disease", which Peak Stupidity posted long ago.
The Alarmist
PS

The enemy is humanity. Our “leaders” have decided to migrate us to Transhumanism. Can you say nanoferrites?

An array of nanoferrite-infested cells that crossed the blood-brain barrier would be effective receiving antennae at the top of the 5G band... just sayin’.

Do we really know what’s in those “safe and effective” vaxes? You know, the ones they keep jabbing into more and more arms despite tens of thousands of coincidental deaths, hundreds of thousands of serious adverse events (“It’s just a headache, Bro. It means the vaxx is working!”), and things like a 29-y.o. pro soccer (football over here) player dropping on the pitch with a stopped heart.

They’re telling us, “We are the Borg. You will be assimilated. Resistance is futile.”
Dieter Kief
PS The Alarmist praised the Kink's LOW BUDGET LP (these were still LPs then - 1979) and there is this song here about progress and - (medical) drugs and drugs too - an op-ed about the conundrums of the 20th century of sorts in 3 min. something, this song - (aesthetically truly Ockhamistic stuff this, I'd like to remark).

Then Dr. Freud shows up speaking out against cocaine...and recommends to - Dr. Peterson, how's that?! - "kick the cat!"...

The Kinks and one of my favorite intellectuals ever, the poet & writer Hans Magnus Enzensberger: They both developed the same knack for normalcy 68 (!) ff., too. See Enzensberger In Defense of Normality in Political Crumbs - English translation 1990.

Another of the great essays of our time as far as I'm concerned: Some Remarks on The Apocalypse - in the same book: Political Crumbs Mr. Mod! - Now think again about the Hollywood doom-machine and the kind of - Contagion, they're spreading. - Interesting thought especially if you DON'T draw the conclusion, that Contagion (I have not seen it) would be a bad movie.
So it might get counted as a reasonable exception to the rule that Hollywood usually is part of (and co-produces) the - - - - - - the big distraction, the - - - panicky*** - - nervous tension - - - - - THE KINKS are singing about in - - - - National Health.

"If the Americans and Chinese are cooperating on this, who is their common enemy?"

The American and Chinese governments, that is.

Who is THEIR common enemy? Us, I guess.