Good stuff from two of our favorites

Peak Stupidity is done writing about books for a little while, and they'll be only one more post on the Nationalized Healthcare topic. Tonight, we'd like to point out two very good posts by two good pundits. 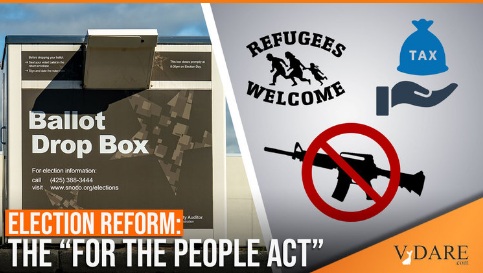 From our favorite literary pundit, as seen on VDare, and I'm sure a thousand other places, there was this post yesterday: "Voting Rights": It’s "Racist" Not To Let Democrats Cheat.

I haven't been keeping up with too much of the Bai Dien administration's and Congress' moves, because I'm not sure I can do a damn thing about them but keep on prepping. Miss Coulter discusses, in her own special style, 3 new bills being introduced to impose on how the States are letting people vote and register to vote. I won't go into the details, as Miss Coulter does a good job. Let's just notice here that this usurpation of States' control of voters and voting is just a continuation of what 4 separate Constitutional Amendments started - they would be Amendment XV, Amendment XIX*, Amendment XXIV and Amendment XXVI. The deal now is that you don't need to pass and have ratified a whole Amendment to the Constitution to usurp power. That's too hard. It's the current era, you know.

Will States EVER fight back against the taking of whatever powers they have left? Probably not until the Feral Gov't is broke, as right now, due to the flow of the money, when the Feds say jump, State officials say "how high, Sir?!" (See # 1 on the list of evils of the income tax in the "Part 3" post on Amendment XIX linked-to below.)

Speaking of the Feral Government being broke, I refer the reader to a short post (his usually are) from blogger Audacious Epigone.

Here's the link to: It's Not Transitory, It's the New Normal, with the "transitory" referring the current higher inflation rate.

Mr. Epigone usually writes posts to discuss data from the General Social Survey and other polls, broken down by sex, race, age, and political leanings. I like his take on things, and I especially like his colors as used in his bar graphs. They don't have the usual intentionally arbitrary color schemes used for political correctness. (Have you read The Legend of Schooldigger?) However, lots of polling data is just plain worthless, as I found out myself from being a respondent this past December. I got tired of the discussions of data that may be meaningless.

When Mr. Epigone writes his occasional finance-themed posts, he is right on the money, IMO. He comes off as a Ron Paulite, and he tries his best to sound the alarm for what's coming. This latest one is only 5 short paragraphs that'll take one minute to read. I urge the Peak Stupidity reader to click on this one.

Enjoy them both. Perhaps "enjoy" is not the right word, as neither writes about anything happy but just the truth.

PS: I haven't commented much at all under Audacious Epigone's posts, because I just don't like a majority of the commenting clientele that much. There are the guys that write under Steve Sailer** too. The other A.E. commenters are OK people too, and not flat-out Commies or total anti-Americans, such as those under many of unz.com's other writers. They just seem naive without an understanding of the root of our problems. Perhaps it's a younger crowd in general.

** That includes our commenter "The Alarmist" under this one. Alarmist, I only didn't mash agree on this one because I think (hope anyway) that Americans will not give up their gold to the US Feral Gov't, just as most didn't during Roosevelt's confiscation attempt.

Moderator
PS: Mr. Blanc, I wouldn't be surprised by any of that. The situation is pretty far gone.

Alarmist, I agree with you on that one and noted that just the other day when you wrote about it. Mr. A.E. has his core group, clique, I'd say, of commenters. Those are the ones I got kind of sick of. They aren't bad, but they kick around some of the same ideas I don't agree with and don't seem to learn anything. Most are not real Conservatives.
Moderator
PS: Mr. Smith, I'm just staying out of the whole market, but I suppose it can stay irrationally* exuberant longer than I can stay physically solvent. You're probably right on that sentence about prepping.

I'll give Miss Coulter credit in this column for mentioning both aspects, the fraud in voter qualification AND the fraud in vote counting (for the latter, she addresses the "motor voter" laws and such). She wouldn't go far enough to discuss a poll tax or literacy test. That's too non-mainstream for someone who wants to keep a syndicated column, I guess.


* It's not really irrational. If the Government props up a market, you go along - better to have the word and get in first though.
The Alarmist
PS

I’m annoyed with Epigone never quoting me as hedoes with many others, but feeling free to borrow specific phrases I have left in comments on other of his posts.
MBlanc46
PS It’s simply RACIST!!!! to prevent anyone who wants to vote in American elections from voting in American elections. Well, except perhaps white people. That’s simply the way that things are going to be. Throw open the borders and throw open the polling places. Don’t be surprised if they start exporting ballots so that those who aren’t able to get over the border on election day can exercise their right to vote in American elections. If we don’t want to undergo the consequences of this policy, we shall have to detach ourselves from America.
Adam Smith
PS: Good afternoon again...

Even with literacy and IQ testing (and possibly a poll tax and other qualifications) we would still have to figure out how to eliminate vote count fraud from the “elections” if “elections” are to have any legitimacy.

For it does not matter who votes that counts, it only matters who counts the votes.

Or, to misquote Uncle Joe...

I see no meaningful way to remedy this unfortunate situation.

Voting? Lol. Seriously?
It's cute that Miss Coulter has faith in the franchise.
Without literacy and IQ testing (and possibly a poll tax and other qualifications) we might as well let 10 year olds vote.

AT&T's dividend yield is currently at 7.09%.
AT&T's dividend might be one of the few ways to try to keep up with “inflation”, as long as it's available.

☮
Moderator
PS: Bill, I was wondering if he was being facetious on that. Or, did he mean by "better" that AT&T was only losing 1.33% a year in real money? Haha! The wording would still be wrong though. (I am not in any market and don't care enough to even look this up.)
Bill H
PS Audacious Epigone got a little careless when he cited AT&T as yielding three times the federal bond rate, which he quoted at -4%. Three times a -4% would be a -12%, and I think AT&T does quite a bit better than that.