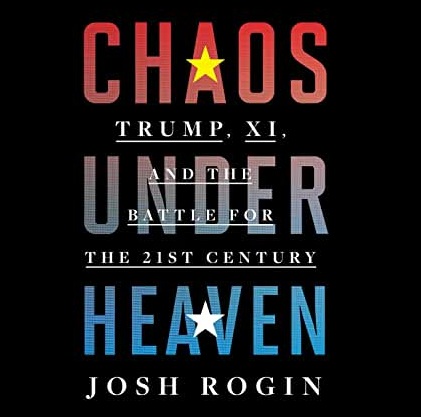 Media lefties are gonna be media lefties, I suppose, even if they do have interesting things to report on Trump v Xi in Chaos under Heaven. In our 2nd post about that book, Chaos under Covid, I mentioned some that I'd write about something in that book's Epilogue I didn't agree with. Well, the book has got to go back to the 'brary, so I'll just write about the one thing that pissed me off the most in Josh Rogin's description of China and Election '20.

Regarding the election, the author seems to be completely on Joe Biden's side even as he admits that the CCP wished for a Biden win, so they could deal with a more predictable American President. This excerpt is from the bottom of page 290, in which the author discusses the alleged damning Hunter Biden material from a computer hard drive found in a shop in Delaware:

The Hunter Biden material was Bannon and Giuliani's "October suprise" -- their attempt to introduce new information to the presidential contest that would tip the scales toward Trump, as they believed that FBI director James Comey's revelation about Anthony Weiner's laptop (and its hard drive containing Hillary Clinton's emails) had done in the run-up to the 2016 election. But this latest laptop gambit ended up falling flat because most of the mainstream media refused to cover it, still feeling burned after being used as a tool of Russian email hacking and dumping during the 2016 election cycle.

Oh, where to start with this stupidity, where to start? The media refuses to cover things when they don't go along with their agenda. The Lyin' Press was shocked that Donald Trump won the '16 election, and they didn't want anything like that to happen again. Trump was supposed to lose, so therefore the Hunter Biden story was not covered. In fact the off-Broadway , errr, off-mainstream NY Post did have a big scoop story on it, but it was ignored, or should I say, "the media refused" it.

The media "got burned" by the Russia, Russia, Russia!! story? Seriously? The Lyin' Press kept this story on for 3 out of the 4 years of the Trump Presidency, only stopping to spend more time with the family promoting the Kung Flu PanicFest! Peak Stupidity couldn't believe, even a year and a half into this Russia BS story, that "this crap is still on?!" - see Nothing but distractions.

What a stupid attempt at deflecting the reader from the agenda of the Lyin' Press by writer Josh Rogin. Oh, the media felt burned from getting suckered to run 3 years of "the Russians did it", so they didn't want to be "wrong again" by covering the Hunter Biden/Chinese honey-pot story. Yeah, sure that's the ticket. Just expose yourself as a ctrl-left Lyin' Press hack back there in the Epilogue. That way, it's too late for the reader to return the book to the store. This one goes back to the library today. It's overdue anyway.

I think it's just a bit odd to see a swamp rabbit swimming.
I'm sure Mr. Peanut was never in any danger.

I have no idea why the lügenpresse made a thing out of it.

☮
Moderator
PS: I also looked at the pics, Adam, but I could not verify this big attack rabbit. "Trust, but verify", the next guy said, which really means "don't trust."
Robert
PS: “.jpgs or it didn't happen...”

This is one of those events so strange (and so fitting when coupled with Ronnie getting shot) that few people want to believe in it.

I had a friend a few years ago, who thought Mr. Peanut was the greatest President of all time, and just would not believe it. There must be some other explanation.

☮
Moderator
PS: Robert, thanks for that one. It seems that the job of "dear leader" is getting safer and safer. That is with the exception of Jimmy Carter's attack, which, well, I don't want to doubt an honest guy like that, but .jpgs or it didn't happen.
The Alarmist
PS

I need to correct myself... the first figures showed mostly disapproval across all French, the second lot showing mostly indifference and approval were the 18 to 24s.

Those are the ones who will be coming with pillows to make us older folks pay ... if we’re lucky and they don’t simply hack us to death.
Adam Smith
PS: Good evening Gentlemen...

Indeed Mr. Moderator, both Marcia Brady and the unknown girl in your post are pretty cute.

Macron Slapped? Put me down under Enthusiastically Approve!
Too bad his teeth weren't knocked out.

“Investigators found weapons, including a sword, a dagger, and a “collector's rifle,” in 28-year-old Damien Tarel's home, as well as Adolf Hitler's fascist manifesto.”

No. Not a copy of Mein Kampf! Triple Plus Bad Thoughtcrime!

A sword, a dagger, and a “collector's rifle”, oh my.
Imagine the outrage if this guy had a working rifle and ammo to go with it.

☮
Robert
PS: Reagan gets shot, Carter gets attacked by a Rabbit, Bush the lesser gets a shoe thrown at him, and Macron gets slapped, Jean Chré​tien gets a pie in the face. I want to believe that there is some kind of symbolism here.
Moderator
PS: That one wanted me to prove my age or something, Alarmist, but I found it right away on youtube. (In fact, all you have to do is type "Mac" and top hit is already "Macron slapping", rather than "Macaroni and Cheese made Southern style, or something. Haha!).

Reason Rusfromme
1 day ago
I like the sound of slapping a politician. It was really clear, hi-def

Yes, and about your stats, I'll believe your 2nd set. I'm nothing if not an optimist.
The Alarmist
PS

You might see it here ... It starts a few seconds in ... sorry, but the sound is in French

I just saw newer numbers, and 49% are indifferent, 27% indignant (reason unknown), and 24% approve of the slapping.
Moderator
PS: Alarmist, I hadn't heard that story, but I hate to see those kind of numbers. I'd be more happy in reading 60% approval, or are they "indignant" because the slapper wasn't armed with at least a 2 x 4 instead?
The Alarmist
PS

Marcia with braces or without? Broken nose or not?

I’d love to see a poll of Americans attitude if someone were to slap Creep in Chief upside the head like the dude who slapped Macron yesterday.

According to a poll shown on CNEWS, apparently 60% of French were indignant, but, more tellingly, 29% were indifferent, and the rest approved.

Moderator
PS: Man, that Biden story just displays the stupidity that can be seen with texting in general. The level of conversation is at a new low ... well, second to twitter maybe.

Haha, I got it slightly wrong perhaps, but Peak Stupidity has been there, done that Jan Brady thing with "Why is it always "Maskers, Maskers, Maskers"?!"

I've got a young woman in an image on that post that's even cuter than Marsha Brady, if that's possible.. even WITH a mask on.
Adam Smith
PS: Good morning Mr. Moderator...