You're not gonna believe this shit ... 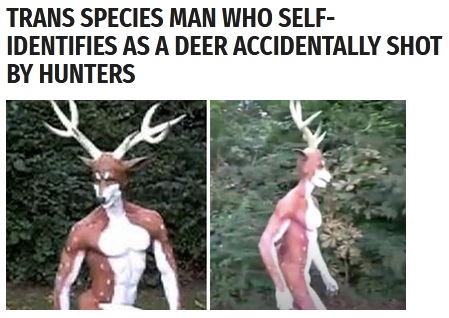 William Tenenbaum, 31, is lying in critical condition according to medical staff at Allendale County Hospital after being mistaken for a deer by two local hunters.

According to the two hunters, Tenenbaum was dressed and painted in the colors of a deer and was wearing antlers which made him unrecognizable to the two men.

“It was the first time in my life that I’d seen a deer stand up and walk on its two legs. That’s when I went for a clear shot to the lungs,” Harry Perkins, 72, told reporters, visibly shocked.

It took me 2 minutes or so to finally realize that, no, this isn't real. It should not take that long!. That's what has me not just smiling at this nice job by the World News Daily site - here, but shaking my head as well.

See, the problem is that this could be funny at all. If you went back 10 years, well, better make it 20, this couldn't be a joke. "Whaaa? It's not Halloween. Plus, you'd wear the suit to a party, not out in the woods. I don't get it, I mean, you need to work on this one... maybe just start over."

This story could be true now. The World News Daily put enough different humorous lines in there to finally clue me in, but it's hard for these types of sites to keep up. First, the joke has no reason to be funny, because it's too stupid an idea. Then, it could be funny for a short period. Then, it's no joke anymore because this sort of thing happens twice a week in this country, and it's no laughing matter!

Anyway, at first glance here, this WND site is just as funny as The Onion was to me years ago. I'll have to check it out more. OK, one more excerpt:

“When he was eight he believed he was a porcupine, then at 12 a squirrel, now he’s a deer. It could be worse, he could be a homosexual,” his mother argued when reached by phone.

Heh, heh! That's where I was pretty sure this was bogus. You can't just go saying THAT.

It would have been funny ten or twenty years ago... at first glance with what I’ll call “2020 vision”, I thought it might be real.
Rex Little
PS
https://www.youtube.com/watch?v=hYQVdGHsC3I
MBlanc46
PS This calls to mind a story from my days as corporate editorial drudge. One of my younger colleagues had recently received an MFA from the School of the Art Institute of Chicago. As that didn’t quality for gainful employment, she was working as a corporate editorial drudge for the same corporation as I was. She maintained her artistic aspirations, however, and did side gigs as a performance/installation artist. We were on friendly terms and I’ve got an interest in the arts, so I went to a couple of her events. The one that I remember was on just the theme of your post. Her character was a woman who, traumatized by having hit and killed a deer with her car, was slowing grafting deer parts onto herself, en route to becoming a deer. I used to know the name that my colleague gave the character, but I’ve forgotten it. She had some photographs of herself in her deer get-up; I bought one from her, but it disappeared when I moved in 2000.
Adam Smith
PS: Lol... That site reminded me of the dailysquat...

Simliar layouts, different websites.
It's funny because it could happen, crazy as that is.