We need to talk about Kevin - Lionel Shriver 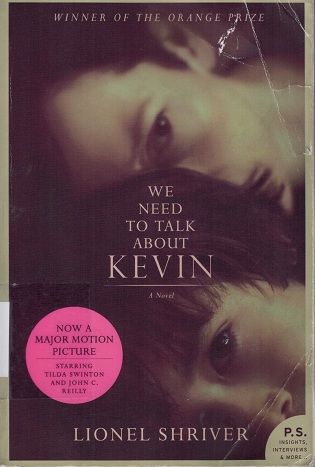 What's this novel got to do with stupidity? It's the usual situation here: I read the whole book, it's my blog, so this will be a post. This is not the first novel Peak Stupidity has written a review on, but novels ought to have shorter ones, right? Only, for the last novel* by this author, Lionel Shriver, we had a 6-parter! That was a big exception as that last one I reviewed, The Mandibles, was a very realistic dystopian near-future story with a lot in it that would be useful to, or at least argued about, by we preppers. (That's at least on the economics side of things - not guns and ammo, gardening, or back-up power.) See Introduction, Part 2, Part 3, Part 4, Part 5, and Conclusion.

When I mention that book, people often recommend this one. We Need To Talk About Kevin is a POWERFUL book. That's the first thing I thought of after finishing it. I can't say that "I couldn't put it down", because it is 400 pages, after all, and I had stuff to do. It's just a hell of an emotional story, and Lionel Shriver is a great writer.

Kevin from the title is the son of the narrator, and he ends up shooting and killing and injuring a bunch of his high school classmates** at the end of the book. Wait! No, that doesn't spoil the book. Seriously! See, we are told that from the beginning, and even on the book jacket, so you're gonna know that soon enough, even if not from Peak Stupidity. Miss Shriver wrote this novel as a bunch of after-the-fact letters from the narrator Mom to her ex-husband, the Dad of this excitable boy*** Kevin. Really, Kevin is not the excitable boy type, but a child who never seemed to like, much less get excited about, anything at all in this world. That includes his Mom. Kevin is in jail during the duration of the book, as one might expect.

As with the conversation used to explain many parts of the story in The Mandibles, these letters sound just too hifalutin and literary to be real letters. That doesn't really detract from the realism in this one. Since the author has a huge vocabulary and amazing grip on the English language, she's writing of what she knows. Even if the narrator Eva's ex-husband Franklin didn't really need to read this kind of writing, the narrator could have been really writing like that, were she a writer, and she IS in the story. There are no reply letters, so it's one-sided anyway.

Lionel Shriver's writing of what she knows*** means that you're going to read everything from the viewpoint of a long-term NY City dweller, and you know what that means. The perspective about the rest of America, seen mostly in one chapter (letter) in which the author describes to her boy what she doesn't like about it, is from that of a New Yorker. There's her mention of the NY Times as if it's a very important part of life, and I have to except just this one part [top of page 207]:

For some reason I imagine it will reassure you that I still get the Times. But I seem to have misplaced the grid I once imposed on it to determine what parts were worth reading. Famines and Hollywood divorces appear equally vital and equally trifling. Arbitrarily, I either devour the paper soup to nuts, or I toss it smooth and cool on the stack by the door. How right I was, in those days; how easily the United States can get on without me.

That the United States could get on swimmingly without the NY Times is something the author may not be able to fathom. BTW, as for leaving the US, Eva had made a career as a travel writer, owning a company that produced books for the low-budget young travelers going abroad. The feminism one would expect comes out in this book, but only in small doses, and Miss Shriver even shows the narrator going off the reservation of that subject, with her choice of a husband. Then the parenting*** part, the biggest subject of the novel, eschews any feminism, other than the subject of choosing to be a parent or not.

What about the subject of guns? The novel has loads of mentions of real school shootings that had happened up till the finishing of the book, from Eva and Kevin. (Eva is always writing about the past, until the very end, keep in mind.) Lionel Shriver does have the expected ignorance about guns in general, as with the one scene near the end of The Mandibles. Hell, every time she mentions a semi-auto rifle in here, it's called an "auto". Trust me, if a big gun control agenda seemed to be the theme of this book, I'd have turned it back in to the library about 1/2 way into it. Believe it or not, it is not.

I ask the Peak Stupidity to believe me when I say it's worth ignoring this minor New Yorker**** mindset to enjoy this gripping novel. After the beginning of the novel, with its description of Eva and Franklin's happy marriage, we hear about Eva's very tough decision making about whether to have a kid. Her bio-clock has come mostly around to 12 O'clock, but that feminist mindset tells her that enjoying the child-free life is more important. OTOH, Franklin is keen to be a family man. As soon as Kevin is born, there is no normal mother/child bonding, and the boy is seen to be a problem right away.

Then, we get to read lots about the upbringing of this mass murderer, as few snippets of Eva's interactions with people after the fact are described, including visits to her son in the pen. The family life is described, which includes the signs of what's coming from Kevin, as Franklin the husband, being an all-American Dad type and a glass-half-full guy about his son, just can't see it all coming. Each chapter, which is another letter, starts with some current events, and then discusses Eva's thoughts on portions of this family life and what were the things going wrong.

It's great reading, and even after one gets to page 400, the end, there is a nice quick honest auto-bio by the author. (It has some interesting things about the publishing world too, as nobody wanted this one, in general.) Then, the author discussed the reaction to the novel. Miss Shriver notes in these afterthoughts (included in at least the copy I had) that the Amazon and other comments on her novel had some great discussion based on the readers' different takes on what the real conclusion of the story was. Was it about nurture, that Eva was never fit to be a Mom, or was it nature that caused Kevin to kill all these kids? Of course it's not a real story, but throughout the book, I was under the impression that the author was conveying that it was nature. There are some bad seeds, and you may get the one in a million that is just a step beyond and just plain evil. I am so glad to have experienced the opposite!

5 stars go to We Need to Talk About Kevin from Peak Stupidity. Thank you so much for the great reading, Lionel Shriver.


PS: One very minor weirdness in the book is that all the years that begin in a "1", as in before the year 2000 are written with a capital "I" (with the crossbars - don't know what font you're looking at right now) instead of the number one. This is everywhere, and even the publisher's address on the copyright page is in zip code I0007, and the book was reprinted in 20II. Well, during that reprinting, someone must not have had the extra funds to pay for all those ones, or something. It's a number, right?! I could have sold her I000 "1"s for a discount. Who does this? I don't have The Mandibles on me now, so I can't check if that's a Lionel Shriver idiosyncrasy.

* I'm not purposefully trying to sound like the literary type, such as John Derbyshire ("I decided to look up some more books from this guy", to paraphrase from interesting monthly "Diary" article), much less a Ron Unz with "I wanted to look into this more, so I read 14 books about it yesterday" - I mean, I believe him, I guess, but it may be more beneficial for him to just step the hell outside. I'm usually not able to even read the books that just come my way via recommendations and availability from the library.

** Yeah, and to be correct, one teacher and a cafeteria worker too.

*** That is, with the exception of motherhood itself, which she admits that she was worried about, in her afterward about the book at the end.

**** Oh, wait, she never says she lives there, but she is "based" there, and in London. Yeah, based there, but not "based". Steve Sailer has made fun of that expression before, cluing me in to notice it more.

stretch23
PS fyi Her husband is jazz drummer Jeff Williams who teaches in London. You should also check out her rotating column in Harper's. She regularly skewers lib idiocy.
Adam Smith
PS: You're welcome Mr. Moderator. ☮
Moderator
PS: Oh, yeah, Mr. Smith, I did mean to mention that it was made into a movie. (In fact, the image above shows that red sticker saying so.) I'm glad I read the book first, but I'm gonna watch the movie too. The characters won't look like what's in my imagination though.

Thank you for the link foo, helping out those who want to get this book quickly.
Adam Smith
PS: Good afternoon Mr. Moderator...

Thanks. I've not read this book, but I did see the movie a long while back.
From your review I'd imagine the book is better.

Here are a couple of electronic copies in case anyone would like to read it without going to the library...

The last link is one of those hybrid files I like so much.
Simply change the file extension to .zip and it is an archive containing the first two files.

These copies have proper 1's in them. One of them says copyright 2003 while the other does not say.