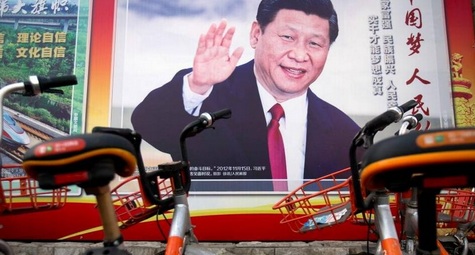 We left the AntiChrist candidates behind quite a couple of years ago after some speculation about Øb☭ma and The Hildabeast. Perhaps it's time for Peak Stupidity to do some more musing about Hu it could be: Hu? no, and not Yu... Could it be, I don't know ... XI?

The blogger is an old China hand, as the diplomat types like to say - that sounds cool anyway. From 15 years back until about 3 years back, I'd had high hopes for the place - see also Part 2. That's no longer the case. Talks with my personal contacts, the reading of Kai Strittmatter's book We Have Been Harmonized*, and now a book I'm almost finished with (review coming shortly), have got me thinking China IS America's biggest external problem after all.

No, Peak Stupidity has not turned Neocon. I don't think the US has any business controlling the South China Sea and defending Taiwan for that matter, not to mention that we're beyond broke, so we may want to delegate all that to the Japs or something. China historians note that the Middle Kingdom hasn't had a history of colonizing the world. There were the interesting 7 "treasure voyages" of Chong Ho, aka, Zheng He, during the first 1/3 of the 1400s AD, some of them comprised of over 20,000 men on hundreds of ships, as related here. The seafaring exploration to as far away as eastern Africa just stopped after Mr. Ho's time, due to the Confucians' negative attitude about it all. The Chinese are building up a big military now, but it's not the physical/military expansionism that's the worry. To me, it's the cultural expansionism being pushed by the Chinese Communist Party.

What's changed over the last 3 years is that the Chinese President, and therefore CCP Chairman, Xi Jinping, has made himself President for life. From what he's been up to, it seems this guy aspires to be the new and improved Chairman Mao, but with all-you-can-eat buffets instead of the "iron rice bowl", stylish haircuts instead of the "rice bowl cut", shiny high-speed trains instead of the bicycle, and the Digital Yuan instead of, well, jack squat.

A few years after Mao Zedong died, the new Chairman Deng Xiaoping took over and improved the lot of Chinamen over a decade of so, after realizing that the economics of Communism were a complete shit show. That lesson seems to have stayed learned, through the present, at least. The hardworking Chinese people have created one hell of an economy, with no small credit due those Americans who gave them much manufacturing capital and provided them with the ability to steal loads of intellectual property for nothing in return.

My reading of the book I'll soon review, with it's descriptions of high-level meetings/dealings between Chinese officials and Trump administration officials, taught me about the arrogance of the Chinese at this point in history. The thing is, the country has a long, long (~3,500 year) history of arrogance. Just the term they dub their nation, The Middle Kingdom, the center of the world, took arrogance to keep using. In my lifetime, when China was still a real honest-to-Trump shithole, with a billion and a half poor bastards getting roped into one stupid Commie program after another, it was hard for me to believe they could be like this. Maybe this arrogance was hidden within the Chinese people too at that time. Not a lot of Americans or other Westerners were there to see it all.

Well, the arrogance has come out in spades with the rise of the New China. Xi Jinping, President and CCP Chairman for life, has got his share. Rather than just flex military muscles at this time, the CCP has been spreading Chinese culture around the world via the millions of Chinese people overseas. Not all of these ex-pats are Commie bastards (as I'll note in a post to come). It's hard for us as Americans to pick out the CCP-supported and CCP supporters from the other Chinamen though.

The Chinese have always believed that their emperors had some kind of "Mandate from Heaven" to rule the whole lot of Chinese people and do whatever the hell they wanted. CCP Chairmen are basically the new emperors. It sure seems like Chairman Xi is following in the footsteps of old butcher Chairman Mao in his Totalitarianism, but with Orwellian electronics that Mao couldn't imagine in his wet dreams. It's #1984WithChineseCharacteristics @XiJingping

I'm telling you all, this Xi bastard has a mandate straight outta hell. He's AntiChrist material if I've ever seen it.

Ganderson
PS. Many good players come from Chicagoland these days: Chris Chelios was probably the first Chicago native to become an NHL star- he’s probably the best player to ever come out of the region. You’re correct, those 60’s and 70’s BH teams were pretty much all Canadian, as was the entire league. I believe, and I did once look this up, but I’m too lazy to go back and re-count, that there were fewer than 10 non-Canadians on NHL rosters in ‘67-‘68, the first year of the great expansion.

Even though I was a North Star fan, I remember those Hawks teams- in addition to the guys you mentioned let’s not forget DENNIS Hull, Pit Martin, Chico Maki, Bill White, Pat “Whitey” Stapleton (who jumped to the WHA Chicago Cougars,) and my favorite, who was part of their Cup-winning team in ‘61 and went on to become the North Stars’ first captain, Elmer “Moose” Vasko.

One of my hockey buddies, who grew up in Winnetka and played at Amherst College, went to New Trier, where Eric Nesterenko was his coach, initially as community service for a DWI, As I’m led to understand. My friend loves the guy.
Ganderson
PS

Love Lou Malnotti’s- didn’t realize deep dish was a “ something for the tourists “ thing- certainly in my time in greater Chicagoland I knew plenty of locals who liked the deep dish.

Are there still a bunch of slavic eateries on Cermak west of Cicero? I often would go there for that delicious Central European chow.
MBlanc46
PS Ganderson. If it’s deep dish that you want, there’s a Lou Malnotti’s just down Cermak Road. I’m mostly a thin crust guy (as I think most area Natives are), but deep dish does make a nice change. I grew up in DuPage County. We now live in Western Cook, a couple of miles east of County Line Road. Minooka I know of, but I’ve never been there. I imagine that hockey is a much bigger thing now (just about everything is bigger now than it was in 1960). I don’t think it’s played in high schools, but I imagine that all the major universities have it. We had the Black Hawks, of course, and Hull, MIkita, Nesterenko, and Hall were big, but they were all Canadians. Native Chicagolanders didn’t know the game.
Ganderson
PS Mr. Blanc we still on for deep dish and beer this summer, provided of course that all of Chicagoland isn’t burned down by then?

I have it in my brain that you live in DuPage county. One of the National Champ UMASS’ most exciting youg players, Josh Lopina is from down the street ( or expressway) from you in Minooka.
MBlanc46
PS Obviously, I touched the wrong key on this damned tablet. As I was saying, we were more Summer Game kids, anyway. But I can see how you guys up there in the Bold North could take to it. The owners have killed baseball in more ways than one, and I wouldn’t be surprised if the NHL owners have tried to ruin hockey (I wish that I could type the word with a Canadian accent), but it’s harder to ruin a sport that the diversity have no interest in. And I gather that you’re more interested in college hockey, in any case. So, as far as I’m concerned, keep the hockey (or Hawkey, as we say around here) coming.
MBlanc46,
PS Xi’s a hard-@ss. Rather like Putin. They’re both hard-@sees who saw their chance and took it. Unlike our candy-@ss, sissy pols. Unlike Mother Russia, China is a place that one might think could become the World Colossus that the US might have become if we didn’t have such a penchant for candy-@ss, sissy pols (perhaps because we’re a candy-@ss, sissy people). The question is, can they do it without Western intellectual property to steal, or, perhaps more importantly, rich Westerners to buy their cr@p products. Stay tuned.

PS Ganderson, I do enjoy the hockey posts. We had the skates and sticks and pucks when I was a kid, but there was no one to show us how the game was played. And we were much more Summer Game kinsman
Ganderson
PS

Boards surround the entire rink. When the Civic Center was built in 1972 (for the late lamented Minnesota Fighting Saints of the World Hockey Association, which sought to compete with the NHL) the clear boards were a novelty, one that never caught on, sadly. Four WHA teams survived to merge with the NHL, Winnipeg, Quebec City, Edmonton, and Hartford; alas, not the Fighting Saints, who folded (twice) before the merger. Of the four only one, Edmonton, still plays in its original city- the Nordiques moved to Denver, the Whalers to Raleigh ( Raleigh! That’s a joke, right?) and the Jets to the Arizona desert, hockey country if ever I saw it. The current Jets moved to the ‘Peg from Atlanta, which makes more sense.
( Here’s a song by the Weakerthans about the prairie metropolis: https://youtu.be/xLlsjEP7L-k. )

The Civic Center is also where Randy Skarda of the Minnesota Golden Gophers hit the pipe in OT (groan) in the NCAA championship game in 1989. Harvard won the game. When Skarda dies, his obit will be headlined “ Randy Skarda, Who Hit the Pipe in ‘89...”.

You can see the clear boards in the clip below- today, however you’d never have clear dashers (what the Canucks call boards), as they are covered with ads.
https://youtu.be/qTUpzMmJovk

I am better Mr. Moderator- I’ve decided there’s little I can do about the wretched state of the world save withdraw into private amusements, and snipe from the sidelines. Besides, I began my new run as an assistant high school lacosse coach, (as opposed to head coach) with a come-from-behind OT victory!
Bill H
PS Given the way his name is pronounced ("she") I tend to have fun with this nation's interaction with China.

We are getting our lunch eaten by a she.
We're being outsmarted by a tranny.
(Man calling himself "she.")

You get the drift. See how politically incorrect you can be.
Moderator
PS: Mr. Ganderson, I know that the "boards" are behind the goal, right, ... or something? Haha, I am sorry to say I don't know very much about the game, having not grown up in a hockey-playing area. I'll check our your videos.

I am glad to see you're in a cheerful mood. We I live we are back near enough to normal (maybe not economically, another story), to where, when I got in traffic the other day, I was kinda wishing for a teensy weensy further epidemic, just so's I wouldn't have to keep weaving around these assholes. ;-}
Ganderson
PS

Happy Cornell Day, everyone! Second best show of the week, as the lads played in St.Paul 3 days later and blew the doors off the only hockey arena in North America with clear boards, the St. Paul Civic Center.