The Legend of SchoolDigger

Long ago, in the misty mountains of Mordor, there stood a girl so fair, rambling on... for hours and hours in front of a small piece of glass ... searching for ... good schools. No, see, you got us all wrong here. Peak Stupidity doesn't do horror literature, except when it's unintentional. (See our, well, pretty much ALL of our Topic Keys, for that.) We just go for some good titles.

This post is not about Sleepy Hollow, Dark Hollow, and any headless horsemen or grave diggers or excitable boys. We refer to the legend of the bar graph below from the School Digger website which contains information on government schools throughout the nation. Peak Stupidity has displayed some graphics from this site before in the post Good Schools, Race, and "Worrisome Signs", in which we also referenced the similar, competing site called Good Schools. 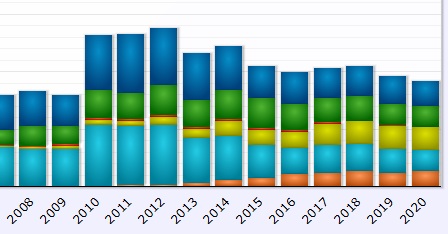 (Note: This is from a school just picked out of the blue - not near me. It happens to be in Indian country.)

Note the colors. It's obvious without even seeing the legend yet, that the makers of the graphs wouldn't be caught dead using colors that might better represent the races/ethnicities graphed. I don't mean White people must be flesh colored as with the old Crayola 64-pack crayon. Just use your basic 32 color set from the old Windows, if you don't want to appear too realistic.

I haven't been on his blog much at all in months, but one thing I like about the level-headed "Audacious Epigone" is his use of appropriate colors for his graphs (usually bar graphs, but the same would apply to line graphs or pie charts). I've praised him for it a couple of times in the comments section. Black for black, white for white, brown for Hispanic, red for American Indian, yellow of Oriental, etc. (OK, he doesn't use the "Oriental" term, so his yellow isn't the best, but it's due mostly to his not being able to get the data for just Oriental vs. the vague term "Asian"). Nobody's trying to make fun of anyone with the colors. We just don't want to have to keep going back and forth to the legend, like ...

Here's the legend from schooldigger:

(Note: I had to put it on 2 levels with the image program to fit here. Same info.)


You couldn't do a better job disguising the groups' skin colors or stereotypes thereof! The colors mean nothing. It makes use of the graph more difficult, at least for a good while. However, the choice of a school, or more like, neighborhood to live in FOR the school is a big deal for most parents. The types that go through schooldigger and/or greatschools may not want to admit this to anyone, but they know in their hearts that it's who the kids are that makes the school a good one or not. This means race/ethnicity. Under the "Students" tab one can see graphs like the one above. (That's from schooldigger, and I recall that that greatschools may have pie charts, or what-have-you.)

Therefore, after spending many hours, maybe over weeks or months, on this type of site, perhaps concurrently with zillow for house prices, the parents will get the colors down pat. Dark blue will mean "White kids" - I don't think light blue is much of a factor around most of the country - a decent amount of bright red is perfectly fine, and a smidgen of greenish-yellow is no worry. That darker green means trouble. "Keep the dark green bar small" will be the unconscious thought in the parent's mind after a while. Well, lighter green ain't no picnic either, so just remember "opposite of airspeed gauges". Green is no longer good. Green is bad. A red line is no problem.

After a while, I can see the diligent Mom getting these colors so ingrained in her head that she may incorporate it unintentionally into her speech. "Honey, I had a couple of green teens bother me for money downtown today, oops, I mean black teens." In our ~ year-ago post It's a Beautiful Day in the Leafy Neighborhood, that neighbor could have been saying "Oh, we'd LOVE to have green, errrr, black neighbors!" ... "But, I mean, it's just that we need a place with a doggie park ... if it happens to have more dark blue and red kids, well, it's not because we're racist... now, our Labradoodle, he's another story..."

You know, I miss the times when people were more honest about race. Even though we still didn't get along so well, the honesty helped us get along better, or at least remind us that we may want to do lots of things separately. Bill Cosby was a funny guy back in the '70s and '80s. I remember a kid long ago playing a record album of a Cosby show. One of the funny jokes in there was something I have to paraphrase*, so hopefully I'm not too far off:

[Bill Cosby was talking about black people having to ride in the back of the bus** back in the old days, but not anymore. There's still friction though, he noted.]

"We need to learn to get along. Let's not worry about the color of our skin, people! Black or white - it doesn't matter. When you all get on the bus, let's just pretend we're all green, OK?"

I hope I did this joke some justice. Thank you, Bill Cosby. No thank you, schooldigger, for the massive confusion in initial bar-graph interpretation. We'll get the hang of it, though. "Dark green in the bus. Dark blue, you'd better drive to school if you know what's good for you."

* Unbelievably, not only could I not find the clip I wanted of Bill Cosby's routine on youtube, but even a 10 minute duckduckgo search gave me nada. The results were mostly "the dark side of Bill Cosby ..." and even, instead of Bill Cosby jokes, jokes ABOUT Bill Cosby. Geeeze! When you get canceled, you really get canceled, these days. Isn't the great humor worth anything? Apparently not.

** Hell, White people would LUV to ride in the back of the bus these days, if they could be assured they'd be safe from those in the front.

I can honestly say that I have watched the electric synagogue for about 20 hours in the last 5 years.
Not that I don't watch movies and things, I just don't see many commercials. It's pretty wild to see...

I must have watched this commercial 20 times this past weekend. And I only watched a for a few hours...
WTF? Idiocracy was supposed to be a comedy, not a documentary.

☮
Moderator
PS: Mr. Blanc, I was aware of your meaning of the term "jogger". Yep, some are truly down with the "new honesty" and others are just really scared (justifiably, most times) to say anything outside of this new honesty. They definitely don't use the real term for the joggers, as the crime of saying jogger if your are a non-jogger is worse than murder-1.

Hello, Adam. "Electric synagogue" is pretty good. I guess you really haven't watched in a long time. I have a number of posts under the "TV, aka, Government Media" topic key pointing out the preponderance of racial weirdness being presented as normal on the commercials. Some of it was from when I'd try to watch Seinfeld when out of town, occasionally, on TBS. The show was fairly un-PC, then I'd mute the commercials, but the visuals would just piss me off. I had enough, and it doesn't come on anymore anyway, far as I know.

Steve Sailer's commenters often, and Paul Kersey's occasionally, discuss this phenomenon.
Moderator
PS: Rex, that was just one particular school, picked to not give away my location easily. Even in a large majority White area though, there are enough Oriental women around to where mixed-race is not usually negligible.
Adam Smith
PS: Good morning everyone...

Joggers, eh? In South Carolina they call them democrats. I also like the term non-swimmers.

I was watching the electric synagogue in Asheville. (The only time I watch TeeVee is when I stay in a hotel.) What's with all the non-swimmers and race mixing? Almost all the commercials were full of joggers and race mixers. It's obnoxious.

☮
MBlanc46
PS A time when we were more honest about race? Well, there’s honest and there’s honest. My mother remembered that when she was young there was a sign at the village limits of the neighboring town, “Jogger* Don’t Let the Sun Set on You Here”. And she used the expression “free, white, and 21” quite un-self consciously. My father, old class warrior though he was, once said straight out, “I hate joggers*”. That’s pretty honest. But for my entire life, Those Who Rule Us have been beating the honesty out of us. They’ve been so successful that most people don’t have to be dishonest about race, because they truly believe the Accepted View about race. Trayvon Martin, Michael Brown, and George Floyd are angels; George Zimmerman, Darren Wilson, and Denis Chauvin are racist monsters. So, yes, “good schools” really does mean “near a dog park”. Will whites ever snap out of it? I wish that I knew.

* “Jogger/s” wasn’t the word.
Rex Little
PS Interesting how the mixed-race proportion has risen from almost nothing in 2013 and before, to almost as big as the other four. I wonder if that's a real increase, or if mixed-race people used to just pick one and report that, and now they don't do that as much. I also wonder what the predominant mix consists of in this group.
Moderator
PS: Nope, it sure wasn't, Alarmist.

Do ya think it was a committee of a African Americans and a Pacific Islanders who gave the green light to this color scheme?