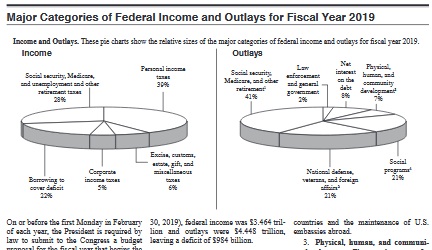 The '20 tax booklet, put out at the beginning of '21, shows '19 budget numbers. Each one is a year behind, understandably.

You really wonder who's been dropping the ball on this each year, as the IRS tax instruction booklet continues to include the 2 pie charts on income and outlays for the US Feral budget. The reader may want to go back to 2 Peak Stupidity posts, also written around tax time (well, one about a 1 1/2 months later). A bit after the '17 tax season, we posted a Quick glance at the budget from US-Gov crack Green-eyeshade boys, and a day after The cruelest day of the cruelest month, of the, I dunno, 8th cruelest year? in '18, we posted a Comparison of '15/17 US Government Budgets. Shouldn't the Feral Government have tossed these pies already with extreme prejudice?

There's some financial reality baked into these pies. It's not that I think these simple charts are the be-all-to-end-all. I imagine plenty of black budget "defense" money is left out or put in the other categories. There's a whole lot to it than what you see here, but I get the numbers out of it that I care about. (Well, that is, besides the running Total Debt, which I can get in tabular form elsewhere.)

As pissed off as I was a week or two ago that I STILL owed money after having extra taken out over the year '20 (pissed off enough to put off sending anything in till a week after the deadline), seeing these pie charts near the end of the .pdf booklet made up for it a bit. Sure, the finances of America and the American Feral government are beyond redemption, but it was just nice to see an attempt to do some basic accounting by those green-eyeshade boys in some office or another.

After pulling some up, I see these pie charts appear in older on-line 1040 "booklets" as far back as I've looked (2011, but I'll check way back later). I've decided to put some of this info a nice table to show the gist of the pickle the FED has put the budget and whole economy in after years of setting basement-level interest rates. Let's just compare a little bit from this '19 budget to the '15 one, shown in the link above, in which '17 is compared to '15. (We just so happened to get to this at 2 year intervals.)

The absolute amount of interest paid in '19, that $360 Billion is 63% higher than that $220 Billion in '15, an additional $140 Billion. Just that amount of additional interest is more than the Total US Debt amount in 1943, in the middle of WWII! Oh, but a buck isn't worth nearly as much, so why compare? That's one point of this all, pointing out that the US dollar is being made worthless. The other is that the FED is in, or has put the Treasury Department in, a real pickle. If the interest rates were let to rise to natural levels, the price of money, the whole budget collapses. Imagine rates of 7%, likely only 3 points above the REAL inflation level. That's 4 3/8 times the interest, meaning that 8% of the pie goes to 35% of outlays!

We haven't even considered the financial shitshow of the Kung Flu PanicFest year of 2020. I am soooo looking forward to my '21 tax booklet when it comes out next January! Will they keep the pie charts that I love so much? I'm guessing these have gone un-noticed by the muckety-mucks and the AA hires underneath them. Oh, and it could be because nobody but me does taxes by hand and even glances at these .pdf's anymore.

That longer-term tabular comparison is coming, hopefully by end-o-bidness week, as Peak Stupidity has other, less important posts to write first. Mostly for my own benefit, I'm including right here a link to a really nice page on the national debt over US history, from The Street.

Moderator
PS: Alarmist, the Feral Gov't could really use a guy like you! ;-}

Yeah, that's a pretty realistic scenario, and you are right that it won't take very long to get there. The "TECH" is already in place for anything they want to do.
The Alarmist
PS

The USD will go digital. You will have a Treasury Direct account and either a Debit Card or a MobiPay wallet on your mandatory SmartTrack&ID device. If you “choose” to work, your periodic UBI account will be supplemented for your actual production adjusted by two factors, one dor your diversity awareness and the other for your climate awareness (think of it as a three factor MBO target bonus scheme). You can spend your credits freely, after requisite deductions for rent on your allotted housing and your mandatory medical care (vaccines, meds like statins, etc.) as long as you don’t exceed quotas on frowned-upon things like meat and alcohol. Cigarettes and guns are out of bounds, but porn and approved drugs will be OK until eight hours before your next shift in the Amazon warehouse or food delivery service, or farm field where you work (You don’t want to be in the last category, because that is where they are going to force-march the hard-core UBI types who display anti-social behaviours).

This is your new normal world, coming closer every day.

You will never see these charts again after 2022.