The unmasking of the Kung Flu stupidity? 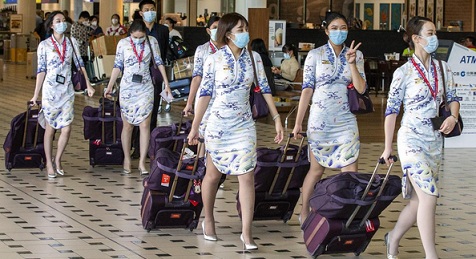 I did not see these EXACT flight attendants at the MSP airport. However, these kinds of pictures keep the eyeballs on the site.

This anecdote, taken from a time period 1/2 hour earlier than that of the previous one, is more encouraging.

Before the gentleman of the other post conversed with this blogger, there was a family of 3, then one more (when the granddad came up the stairs), in that pleasant observation deck. The boy was about 3 years old, and like most, loved watching airplanes. Unfortunately, this was a dead time, at least for traffic on runway 30R at the Minneapolis/St. Paul airport.

I asked where they were headed, and vice versa, and we had a nice conversation. I had not been wearing my face mask, being un-observed (even unobservable by cameras? Nah, I dunno) in that location. The boy had no face mask on, at least, but the 2 parents at first did. Before 5 minutes were up, with my example setting the tone, we were all face-diaperless, and LOVING IT, JERRY! Everyone enjoyed acting normal.

This family was not at all worried about the Kung Flu. They had been worried about getting in trouble at the airport but were able to leave that fear behind for a spell. Now imagine if we all just started taking them off, walking to the gate, and ignoring the gate agents's admonitions, who, at some point would have to just give it up.

Alright that was a nothingburger of a post, but we'll have more feminism, Lyin' Press, and other forms of stupidity coming up.

Moderator
PS: Yeah, eye candy, Mr. Blanc, and they even serve drinks. "Can't fit in our standard-sized dress? OK, turn it in, and collect your last paycheck and vacation pay. See ya'"
Moderator
PS: My family didn't have the money for me to travel on an airliner until I was 21 y/o or so, Peter, but I do remember seeing people off or picking them up at the gate. I have been to that same LaGuardia terminal as a kid, hearing the Tower frequency radio calls on a speaker. It was a thrill. At 8 or 9, I was never THAT bold, but I did ride my bike about 2 or 3 miles away exploring when I was about 10.

Thank you for sharing those memories. Oh, one more thing, the jets back then made some REAL NOISE with those low-bypass engines, such as on those 727's and 737-200s! I miss that. Many other people, in place like Flushing, Queens, NYC, don't, I gotta admit. You could feel the jet noise in your chest.
MBlanc46
PS Eyeballs engaged, even with the masks.
PeterIke
PS
A nothingburger post deserves a nothingburger comment!

So, speaking of airport observation decks. As a child, I grew up very close to New York's LaGuardia airport. So close, in fact, that my cousin and I used to take about a 15 minute walk, go over the Grand Central Parkway (on a pedestrian walkway), and enter the airport for fun. We were around 8 or 9 years old.

No, my mother had no idea where we were. We were just "out playing." AT THE AIRPORT. Those were the days.

Anyhoo, at the time LGA had an observation deck (long since gone). There were unmarked stairs through glass doors that lead there, right from the curb side, so we'd go up those. That way we didn't have to enter the airport first and potentially get caught. They had a turnstile to enter, price 25 cents, but since no one was around and 25 cents was real money, we just jumped over, like a black guy entering the NYC subway. Or maybe we ducked under.

And then we were out on the observation deck, watching the planes take off and land. This would have been around 1969 or 1970. What a great country at that time!