Kung Flu at the City Zoo 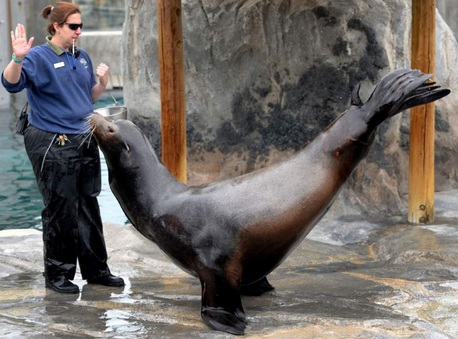 I couldn't find an image with a masked zookeeper feeding a Sea Lion standing on his flippers, but that's what we had.

This is just the latest Kung Flu PanicFest anecdote to round off the low-effort week here. (Next week will have to start slow too.) The kids were on Spring Break, and with not any trip planned, we at least went hiking one day, and went to the zoo another. For the zoo, I had boys from another family with me - free tickets, thanks, Redacted!

I'd called about the tickets and some supposed reservations deal to keep the crowd down. (Whaaa? The place was packed as it always was in the past.) With guest tickets, an entry time wasn't required, but I did hear the voice system tell me about face masks and the city laws.

Now, I could have walked on in there starting a fuss right away. With the other people's kids and all, I really didn't want to start trouble, so we all had them on, and I was prepared for 3 hours of being annoyingly masked up. We hadn't gotten 100 ft in from the entrance when I saw a whole family with no masks on. I complimented the Dad on that, but he told me nobody was worried about it. Excellent! Except of one of the boys (whose parents are plenty young, and should have no reason in the world to worry) we all took the masks off for the duration of our zoo visit.

It was close to 50/50 on the masking. Now that I am writing this, I realize I could have done a nice survey while the kids and I were eating Icees and popcorn. That's a rough guess though.

Unfortunately, a couple of the cool non-animal-related attractions that the kids were excited to do were closed. The old guy in the booth at which I asked about it told me: "They won't be open until there's no virus." Oh, that's a good one. Once there are no viruses, we can all play. It's kind of hard to prove that there aren't any viruses around. I made some remark about how they were gonna know that, and we went and saw more animals.

Besides those being closed, there were 5 daily animal special events with times listed on the map. (It was an old map, because you can only take a picture of the new map, because... the COVID.) One, involving the seals and sea lions, was going to be in 1/2 an hour. Nope, none of the 5 things were happening, because the COVID.

OK, but since we were near the seals and sea lion tank anyway, which is pretty cool, we came from the inside where we viewed them swimming through the thick glass, up to where the stands were for the feeding show that was not going to happen. It was feeding time. COVID or no COVID, they get hungry.

This worked out great because, since this was not officially the daily feeding "show", per se, there was no young lady haranguing us the WHOLE ENTIRE time about not throwing our trash into the river! Peak Stupidity documented that shit-show long ago in the post Someone told me it's all happening at the zoo.... (Yes, it's got the fun Simon & Garfunkel song there.) The 3 zookeepers feeding the sea mammals fish out of buckets were getting them to do a few tricks anyway. The zookeepers saw us all watching, and maybe they wanted to keep the animals current on the tricks for "when there's no virus". It's not like riding a bicycle for these guys, I guess...

Yes, the zookeepers that were feeding fish to sea lions and seals were wearing face diapers, in the open air and the sunshine. At least that kept any of them from giving us a lecture about "the planet" the whole time. Thank you, COVID-one-niner!


PS: Oh, I almost forgot. The merry-go-round for the little ones was operating at what looked like capacity. Come on' guys, are those horses, dragons, frogs, and unicorns all 6 ft apart from each other? Think of the children! Oh, wait ...

Dieter, thank you for that link. I'm writing a post on this now.
dieter kief
PS
So - who would have guessed? CNN dramatized Covid to the max:

https://twitter.com/JackPosobiec/status/1382364998069059591?ref_src=twsrc%5Etfw
Ganderson
PS. IMr Moderator: have a covid compliant take ( or I’m working on it) on my trip to Pittsburgh and the Frozen Four- much Covid Stupidity as well as a victory for the Massachusetts Minutemen!
dieter kief
PS

Sardegna - ok, I know, not that important, but maybe a little interesting island nevertheless, dispensed lock-down completely in winter but the intensive care beds are now full of Covid-patients and they've decided to crawl back and lock down again.

At the other hand, there are these uplifting news:

PS
Please notice Old Holborn's rather wild and dry remark in the middle of the three posts.
Moderator
PS: That's good to hear, Robert. I've seen more and more people that pretty obviously think the whole thing is a show. They will often take off their masks when I do, so they are not exactly scared shitless of the Kung Flu. Maybe it's because they got that vaccine, but, whatever ...
Robert
PS: Today, at the local Walmart, probably 90% of the children were mask-free! A goodly number of adults had the mask on the chin.
Adam Smith
PS: Good morning everyone...

“Hey! Where are you going? You just shot my waiter, and you didn't pay for your sandwich!”

I found this cool digital library the other evening...
Seems like the link labeled Gen.lib.rus.ec has the most stuff...

Lulz ... literally playing with fire.
Guitar Slim Pickens
PS Did the animals have masks?
Why aren't there piles of animal corpses everywhere as the dastardly Black Death 2.0 plague ravages the magic soil of the fruited plain?
Russia recently made a vaccine for the animals so they are not immune.
The article didn't say what species.
Moderator
PS: If you think that's bad, Alarmist, the day before in the woods, my boy and I ended up in a place that had just had a prescribed burn. Mostly the place was just smoking, but we got to some flames still going at the base of some fallen tree and stuck sticks in it and set remaining bushes on fire.

You can't do that at school... anymore.
The Alarmist
PS

Eeek! No masks! I bet you haven’t even had the rug-rats vaxxec yet, you granny-killer. ;)

Good you had the kids outside in fresh air, where kids belong more often than they’re allowed by our wise leadership for the modern ages.
Moderator
PS: I was thinking that when I wrote it, Mr. Blanc, if you can believe me, but I couldn't think of anything wrong with it though. That's English for you. You've probably read "Eats, Shoots, and Leaves", I'd guess.

Good morning, Adam, and thanks for the Flaming Lips tunes.
MBlanc46
PS “swimming through the thick glass”. Gosh, I hope that no seals were harmed. Sorry, couldn’t resist. It’s Old Editorial Workers’ Syndrome.
Adam Smith
PS: Glad to hear you had a good day at the zoo...