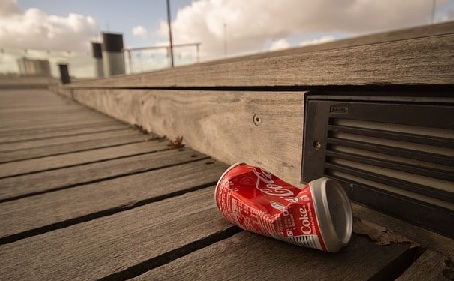 This is minor, minor curmudgeonry at a time when I've been reading so much of the Cultural Revolution 2.0 stuff from Steve Sailer (such as this latest sickening bit about the DIE "industry). I should be concentrating on that, but, this one was already written, and I can't stomach reading the media that Mr. Sailer reads for our sake anyway.

This is about littering. One could say it’s just cultural, not genetic, as Americans used to be quite the litterbugs when I was young, at least many friends of mine during my high school years.

Last week, a couple of tree guys with a couple of Mexican* hands were working next door, and I paid them a few bucks to get them to use the their telescoping pole saw on a couple of limbs that were blocking sunlight from our proposed garden site. Well, they were good guys all. The one who knew the most about trees spoke great English but was Hispanic himself. I remember he was drinking a Coke as he walked about telling me stuff about the trees. An hour later when I went to get my bow saw, I noticed his empty Coke can in the firewood pile.

Listen, I don’t begrudge the guy any, and I’m not at all sore about it. It’s just that an American would either ask you where the trash is, or carry it out to throw in the back of his truck**, or at least hand you the can with nothing said. I mean, just, why? I guess I just notice stuff. It’s a Hispanic thing. As Mr. Sailer wrote in a comment telling Hispanics as a group that littering is not cool anymore is racist. I suppose we can't do another Lady Bird Johnson campaign*** then, much less have a crying Indian on TV. Not cool, Kyle!

Don’t even ask me about littering in China. You don’t have to, as I’ll tell you (from Litterbugs in China):

In the house where we stayed, the Dad was on the porch (such as it was) and yelled something in Chinese (of course) to a kid who had just thrown a bottle down in the road. OK, it was a 5 ft. wide alley, but it was a road to them! I am no expert in Mandarin, but something tells me what he said was “pick up your garbage!” The kid, being a somewhat obedient sort, picked it up and put it on top of a big pile of trash about 50 ft away. It was a pile meant to be collected, but as un-orderly as China is, it was just a big damn mess itself. “What’s the difference?” I said, in English.

Once they assimilate, these folks will learn... oops, but they don't need to assimilate now. That's not expected now either.

* They could have been Guatemalan – how do I know? Yeah, I know, "Squatamalen", and all that.

** A friend of mine had a boat on a trailer locked to his big American car for something like a year or two, having lost the key to the padlock at the hitch. That was his mobile trash dispensary for awhile.

*** I just thought of something. What will be First Lady DOCTOR (of some Big Ed bullshit) Jill Biden's 1st Lady thing?

You all remind me of seeing folks in Spain and Portugal in the ‘80s dumping their garbage over the sides of cliffs and into the sea. I guess it’s a cultural thing brought from Hispañola to the Hispanics.
Adam Smith
PS: Good morning/afternoon to you too Mr. Moderator...

I've never actually seen a dirty diaper in a parking lot.
There are trash cans in most parking lots.

I thought it was mostly just a California/Texas/Mexican thing, (I hear it's a huge problem in San Antonio, for example) but it looks like it's way more common than I thought. Seems like there is a litter problem just about everywhere, especially near population centers.

I do see some occasional litter on the side of the road, but most the nice church people will take a Saturday morning once in a while to clean it up. The local sheriff also has the “inmates” clean up trash along the road and do other light maintenance of that sort.

I'm one of those people who cleans up trash when I go hiking. Not much of a problem around here, but where I used to live it was a huge problem. Mostly beer bottles, coke cans, plastic bottles, fast food packaging and stuff like that. It really seems like it's more common in cities to me. Maybe I'm just lucky and therefore don't see much of it. Probably helps that I'm a hermit who doesn't get out much.

That Mexican/Guatemalan/Honduran should have asked you to dispose of his can for him. Or taken it back to his truck.

"Listen, I don’t begrudge the guy any, and I’m not at all sore about it. It’s just that an American would either ask you where the trash is, or carry it out to throw in the back of his truck**"

By the way, I wonder if the wide-spread use of pick-up trucks isn't partly the cause of all the litter along our roadsides. People throw loose garbage in the back of the truck - they go over a bump or the wind picks it up and - presto - it's now lying on the road-side. Sometimes you see whole bags full of garbage that spilled out of the bed of somebody's F-250.
Moderator
PS: Good morning, Peakers. Laziness, I guess Adam, or the lack of the ability to plan ahead (as in, keep small plastic trash bags in your car when you have babies), explains it, Adam. At least I understand, though not agree with, the reason to get rid of those diaper, but the Coke can - he could have just handed it to me as easily as going to find a niche in the wood pile for it.

Alarmist, on a personal basic, one can get away with "hey guys, can you clean that up?" or, as you imply, calling the boss. On the larger scale, as in "hey, how about a nice polite anti-litter campaign in Spanish?", that would get somebody in trouble. (It's not like anyone should HAVE TO do that in Spanish to begin with!)
The Alarmist
PS

I had a local firm re-do some fencing in the garden, and although decidely not European, the worker-bees cleaned up everything in the area, including crap I cut the week before but was too lazy to clean up. The local business-owner had high standards, and they were followed.

Part of the problem in the US is likely the fear of the racist card trumping worry about bad word of mouth references. The Brits as a whole also live in fear of the racist card; it gets played on the Continent too, but it is not as feared in everyday public life as it in in political and big corporate circles.
Adam Smith
PS: Good evening Achmed and Friends...

What's with the Mexicans leaving dirty diapers to litter the parking lots???
Who does that???