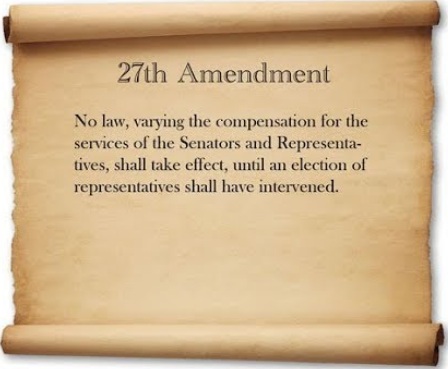 Peak Stupidity has arrived at the last Amendment to US Constitution, so far, and for what it matters, Amendment XXVII. This series has been enlightening for me, as I never really had them in my head before, and I'd never looked into the politics behind them. This most recent one likely goes back to a big majority of our readers' lifetimes, as it was ratified 29 years ago, in 1992. I really can't see much argument on the poltics of Amendment XXVII, unless one is right there in the House of Representin' himself. For almost eveyone else, I see no reason at all to be, or have been opposed, to it:

No law, varying the compensation for the services of the Senators and Representatives, shall take effect, until an election of representatives shall have intervened.

It is short, sweet, and non-controversial. It's something you know the Founders would have been all for. Well, as it turns out, we KNOW they were, as this Amendment was proposed (as in, a vote in favor was passed in both Houses) way back in 1789 by the very 1st Congress.*, pushed by Bill of Rights proponent James Madison. From our usual source, the "Constitution Center"'s interpretation page, we read:

In 1789, Madison proposed twelve amendments to the federal Constitution, the first ten of which were ratified in 1791 and became the federal Bill of Rights. One of the proposed amendments, which was not ratified at that time, was an amendment that became the Twenty-Seventh Amendment and which forbade congressional pay increases from taking effect until there had been an intervening election of members of Congress. Madison did not want Congress to have power over its own pay without limitation. But he also did not want the President to control congressional salaries, since that would give the President too much power over Congress. So instead, he proposed that an election had to happen before any pay raise could take effect. If the public opposed an overly generous congressional pay raise, the public could throw the offending congressmen out of office when they ran for re-election.

The congressional pay amendment was only ratified by 6 states initially. But the First Congress, which had passed the Amendment in 1789, had not attached a time limit within which the Amendment had to be ratified by the states. (Some subsequent constitutional amendments have provided for such time limits.) In the nineteenth century, one state joined this small group, and others in the twentieth, but no one thought it was going anywhere—or thought about it much at all.

As we've mentioned before, a number of the Amendments had the same exact language regarding a 7-year limit on ratification. This one didn't, and was let to languish for a couple of centuries! The beauty of it having been passed already by that 1st Congress is that one could pick it up and send it to the States without any dealings with the current (at any time) Congress.** It had been ratified by 6 States early on, an appreciable number when there were only 13 or possibly 15, at the time.

Moving along to nearly 2 centuries later, by 1982 (or 1959, for that matter, the year of the admission of Hawaii for Statehood***) that initial 6 States plus a couple of more over the years now paled in comparison to the 38 needed. That year, Gregory Watson, a sophomore student at the University of Texas in Austin, wrote a paper for a Poly-Sci class that noted this proposed Constitutional Amendment to prevent Congressmen and Senators from raising their own pay without an intervening election was still up for ratification at any time. That was some neat original thinking, as it obviously was no "hot topic". He received a C grade from the Teaching Assistant that did the grading (perhaps a foreigner?), and his Professor, Sharon Waite, did not budge on this grade upon Greg's appeal to her.

You know how it is. Sometimes they just grade on spelling or grammar, or do this job at the off-campus tavern... Mr. Watson was prompted by this lack of interest to start a letter-writing campaign to State legislatures about ratification. Don't laugh! This was 1982. Some of them still cared about this sort of thing back then. He heard nothing back from most of them, but Maine Senator William Cohen liked the idea, pushed it in Maine, and that State ratified Amendment XXVIII in 1983.

While this campaign went on, by Greg Watson and some eventual help by some bigger shots, he learned in 1983 that Ohio had ratified this proposed Amendment back in 1873, and in 1984 he learned that Wyoming had ratified it much more recently, in 1978. There was no internet then, keep in mind. What a cool job this must have been for Gregory Watson!

In 1985 5 more States ratified #27, and by 1992, the required 38 for adoption of it had. A humorous part of this is that Mr. Watson discovered in 1997, 5 years after ratification by 38 States, that the State of Kentucky already had! Wait, what?! Well, Kentucky didn't know they had either. From Wiki:

At this point, just to rub it in, or to prove a point, additional States ratified Amendment XXVII, already Law of the Land, above the 38 required. Nebraska did as recently as 2016. I guess the legislature had gotten through designating National Proctologist Week, and the like, and I imagine Gregory Watson had other (I was about to say "better", but nah) things to do by then. New York, Pennsylvania, Massachusetts, and Mississippi never have. SPLITTERS!

That was a really cool story. Though I was around and aware of politics during the time of Mr. Watson's entire campaign, I have never heard this story. It was good timing. As that interpretation page notes:

The fact of the Amendment’s passage through Congress in 1789 and of its non-ratification by the states came to public attention in the 1980s when there was tremendous popular disapproval of the performance of the Congress and the exorbitant salaries and fringe benefits members of Congress enjoyed.

The problem is that nobody even thinks this way now. Can you imagine anyone even giving a rat's ass about that old history and that old document? Congress is way too busy with the military adventurism budget, Socialism, and the woke anti-White agenda, which really all comes down to giving away our money, to worry about this pesky Constitutional stuff. This was only 3 decades ago, though. "It was a different time, you understand ..."

Back to the Amendment itself, let me put some of the first part of the interpretation page in, which is pretty interesting. You gotta love that Ben Franklin.

During the Philadelphia Constitutional Convention, congressional pay was a central topic, one that took up several days of discussion. Benjamin Franklin’s initial speech to the Convention was on the topic of public salaries: he was against them. Public servants should not get paid at all, Franklin argued, or we would get representatives with “bold and the violent” personalities, engaged in “selfish pursuits.” Franklin’s extreme argument did not prevail because the Framers wisely did not want only the wealthy to be able to afford to hold federal offices. This is a very good thing. [Uhh, how's that working out for us now?]

Nonetheless, Franklin’s comments caused the Framers at the Philadelphia Convention to focus on the problem of making sure that people did not go into public office to make a lot of money.

We all know these people get rich though use of their office for all sorts of graft. If a Senator is not a millionaire when he enters the Senate, he will be when he exits. How could the Founders not have foreseen this? Oh, right, they really believed that the people would make the Feral Gov't abide by Amendment X.

Well, that's it. That's number 27, so Peak Stupidity has covered all 17 of the Amendments since the Bill of Rights. We're not completely done with this series. A conclusion would be in order, and then we have a proposal for Amendment 28. (No, it's not "All Amendments ratified since Amendment X are hereby rendered null and void", but that's a good thought.)

PS: Yeah, it's not morning, for this Morning Constitutional, but I did start this morning. I got distracted by various things, making me highly irregular. Posting will be very light through the end of this week.

* We are on the 117th now, BTW, which is nothing but (year of current house session start - year of 1st Congress start) / 2. Looking at the people in the current House o' Representin' , as for the American people, they "are not sending their best".

** Yes, the Constitution can be Amended without Congress's involvement in either proposal or ratification, per Article V , but when's the last time you've heard of a convention of States being called? Star Wars conventions, on the other hand ...

*** Speaking of Hawaiian Statehood, a writer at VDare going by the handle**** "Hank Johnson" thinks it would be a damn good idea to push for reversal of that deal.

**** No, not THE infamous Hank Johnson, of tipping-over of Guam fame.

This is a key to understanding how the 'regime' works in the USA. I presume other Western countries also having evolved similar systems. I also presume the US does it more and to a larger scale than any other, partly because of larger scale of the US itself and somewhat higher wealth in the US allowing this kind of broad "slush fund"-like operation, but partly for other reasons unique to the US and its world-position. A systemization of internal bribery?

This applies not just to elected-office politicians, but to other top government employees, foreign ministry (US "State Department"), and most top military figures. Top officials generally have lifetime sinecures, high pay and benefits for little or no work, at this foundation or institution or that, once they leave office. If they got the same compensation-for-work ratio while holding nominal federal office, it would be a scandal.

Paul Craig Roberts was not necessarily a top-line official, but he stands out for being unusual. After leaving office, already by the 1990s he was basically an anti-regime dissident. In his old age he's gotten cantankerous, perhaps, but the thing that stands out to me is how he eschewed the usual system of walking from government into quasi-private-sector sinecure, rejecting the implied bargain.
The Alarmist
PS

Definitely a pointless amendment nowadays, now that there seems to be a general agreement that bribes will be delivered once a politico or high officer leaves office (how can it be a bribe if it is after the fact? IKR). The salary is a joke nowadays.

We need one that provides strict term limits and forbids direct family members within the line of descent in the next four generations or those closer to third cousin to the line in the next three generations from holding high office once a family member has used up the term limits available.
MBlanc46
PS Thanks for another stroll down Constitutional History Lane. And quite an interesting story. It’s possible that I became aware of this amendment when it was finally ratified, but, if so, it disappeared from my memory bank until this morning. The content of the amendment is now irrelevant, as the only pertinent questions regarding our “representatives” are, Is the branch high enough? and Is the rope strong enough?
Not Sure
PS The house of representin', aww yea, haulin' ass gettin' paid.
Monday Night Rehabilitation for all deplorable kulak untermenschen scum who refuse the extra most bestest vaccine.
There will be a Final Solution for these toothless hill scoggins as part of the Great Reset Leap Forward Fundamental Transformation.
Taco Bowls senior Shrubya called the constatooshun just a GD piece of paper and that is how the Uniparty views it, an obstacle to be overcome so there is no limit on fedgov leviathan power.