Hello, this is Josh in, errr, Provo, who may be who I am speaking width? 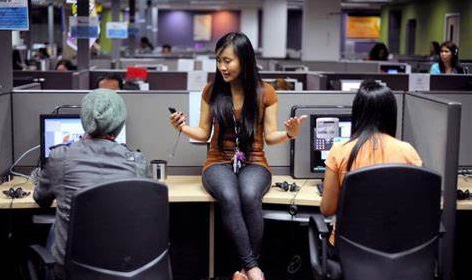 (Yeah, OK, I picked the image for the hottie. What can I say? Search Engine Optimization, Bitchez!)

PeterIke's comment under the previous post reminded me to write this one, something I'd intended to write 14 1/2 months ago. (I know it exactly because that's when I saved some related images.) His question was whether Cody, Aaron, and Jason, the GoDaddy tech support guys I talked to, could really be Cody's, Aaron's and Josh's. I answered in the affirmative because I am very good in detecting accents.

That's something I like about GoDaddy and any other Big Biz outlet that has call centers in America. As far as GoDaddy, I assume most of their guys are in the Scottsdale, Arizona area, going accents and by some times I've asked them. Oh, and Cody this morning may have been woken up by me, I dunno... They are working from home now (STILL), so that could change drastically..

Being able to talk to Americans is not the normal thing anymore. Lots of this work is being outsourced, as we all have found out. It's not just the "TECH" guys, but even such support people as those involved with my healthcare plan. Big Biz is saving that 5-10 bucks an hour. I really don't think that this small difference would bust their budgets if they hired Americans. I think about the internet, which is no cheap deal* anymore for my family. When we have a connection problem (usually on the pole due to rain), the guy may come once or twice even, as they don't always get it right, but this is once every couple of years or so. These guys are contractors. I doubt each series of visits costs more than $100 to the Big Biz "provider". Averaged out, I would say that one monthly bill a year covers that.

Then for the call centers, let's say the difference is $10/hr counting overhead. Even one of the longer calls may be 20 - 30 minutes if it's about technical problems, while billing ones take 5 or 10 depending on the argument. Say once a year each on that, conservatively, so that's not even 10 bucks. What else does the company do, for ME, that is, once the infrastructure is in place? Their marginal profits on customers like me are massive. I'd say that, above the billing, probably outsourced too or very automated and the customer service, physical or other, they keep 90% of my money.

That was the economic estimating that I like to do in my head occasionally. Back to Cody, Aaron and Jason, for that small difference in costs to Big Biz, then will get happier customers. As I wrote back to PeterIke, I don't think those Josh's and Cody's in Bombay and Aarons or Phylis's in Manila are dummies. Compared to the GoDaddy guys, maybe so, but for most jobs, helping me with the healthcare complicated billing thing or helping me return parts for a broken exercise bike, for example, you don't have to be a "TECH" guru.

It's usually India or the Philippines** to which "customer care" is outsourced. That is for the simple reason that these two countries have loads of English-speaking people. In India, it was the British influence, and in the Philippines it was the American influence that has given them this advantage. Lots of these guys and girls can speak English very well, annunciation-wise, and often they hide the accents pretty impressively (though that doesn't usually work on me).

I mentioned the healthcare guy twice. I couldn't believe I had to deal with a guy out of the country on this. At a point at which the call was not going along swimmingly, I asked "Where are you?" "I am from the Philippines." Oh, OK, that could be right, but it sounded like BS. Later on in the call, I asked, "wait, where are you right now?" "Uh, in the Philippines." Ahaaaa! At least Big Biz doesn't have them lying yet.

The problem is not the speaking of English. The problem is the understanding on their end. It takes a long time to get acculturated, and these folks in India and the Philippines have not at all. They simply have a script that SHOULD cover all the questions, and speak English well. That doesn't mean we can really connect when it comes to ideas about problems. Speaking of the script, the GoDaddy guys apparently are not required to do the "I will help you with this, but ..." or "Is this answering all your concerns..." crap. They are more blunt and no-nonsense, which works out pretty well for me.

Maybe Big Biz thinks we are in no position to argue or complain when the give us strange foreigners with fake American names to talk to. However, I almost wrote a big cell phone carrier about this one. (I should have - it seems easier to just blog about it.): I joined up way back when, not only would you get Americans on the phone, but there was not voice system to get them either. They'd just do the damndest thing you've ever seen - pick up the phone when it's ringing. WHAT! A! CONCEPT!*** That was great for 5 years or more. Then, you had a voice system, but you got good people in America. By about 6-8 years back, it was overseas. I lived with it until I had a problem that was too much hassle for me to deal with them on. I let the bill charge up a couple of months due to the lack of communication regarding it and then changed companies after 14 years. No, I am not worried about my credit. It's a great feeling!

Thank you, GoDaddy, for letting your customers deal with Americans! It's a small thing to ask, but could you think about putting some of these guys' pics on the web site instead of your Dieversity tokens, as the People of GoDaddy?


* We had a run for a few years in which I'd threaten to cancel at renewal time, if they had raised the rates. Usually, an actual sales guy would CALL ME, which is pretty damn irregular for Big Biz. If he didn't play ball, I would cancel it, and switch it on in my wife's name. We've both been customers for a while, "married subscribing separately", as the IRS would put it. They are tough asses nowadays. They know you need that internet.

** On the whole, if it's not going to be Americans, I would rather deal with people in the Philippines than in India. It is partly due to my feeling that there is more scamming being done by the •Indians. The other part is that the •Indians seem to be 95% or more guys, but the Filipina/Filipina ratio is about 3 to 1. For technical things, I would rather have a guy to speak to, but for the billing stuff, well, I have the girl up top in my head, so ...

*** I really don't want to hear much of the argument that I'm saving my time punching in my own account #, etc. Half the time, they ask you to give them the same or more of the same, wasting my time!

☮
Mean Boy Czar
PS They tell the replacement (racist!) lifetime CPUSA democrat voters to use American sounding names but you can't hide the thick accent and improper grammar.
Let a family elder oldster answer for a stream of insults
with expletives and gut busting good times!
Moderator
PS: Mr. Smith, yeah, I'm glad that's working, but a couple of years ago Big Biz cable co. #2 bought out Big Biz cable co. #1. The lady in customer service told me candidly that "they play hardball now". I said nicely "we'll see about that". I think she was right. I didn't get them to budge a couple of years back after waiting till the last minute.

The competition is the same price for a slower speed, once you get past their 1st-year deal, per a friend of mine.
Adam Smith
PS: Good afternoon...

“We had a run for a few years in which I'd threaten to cancel at renewal time...”

Every year the local internet company tries to raise our bill. So every year my wife calls and says, why did you raise my bill, put it back the way it was. The first customer care representative cannot do this. She has learned to say, well, I guess I'll just have to cancel. The first customer care representative puts her through to the people who do the canceling. That person will then ask how can I help. My wife says, put the bill back the way it was, and they do.

It's a stupid little game we've been playing for several years now.

☮
Moderator
PS: Mr. Ganderson, I think a lot of .Indians and Filipino(a)s grow up with the English language, at least throughout school. (You probably know this, sorry.) I am not very good at languages myself, so I give anyone lots of credit for being able to do customer service in his non-natural(?) language.

I've never dealt with XM radio people. Thanks for the warning.

Yes, real licorice is not like the rest. For me, purples are 2nd, unless we are talking the Ronald Reagan style fancy ones with hundreds of flavors. That was a real thing in the 1980s, but I guess you can still get them in real candy stores.
ganderson
PS

And... Happy Easter everyone! I found some difficult to locate black jellybeans, which made me very happy!
Gandersonn
PS

Also- are these people from problem-solving cultures?

As you all may know, I speak Swedish. Not perfectly, but when I go to Sweden I can get pretty much everything done I need to get done in that language. My pronunciation is pretty good, but no one would think I was a native.

However, I find talking on the phone way more difficult- accents are harder to pick up- and Swedish has a bunch, more than you'd expect from a language that has only 10 million speakers. I can't imagine doing a job that would require me to speak in Swedish on the phone.

I've found XM radio to be really difficult to deal with. I don't imagine I'm the only person who this annoys- it would seem to me pursuing a strategy that needlessly pisses off your customers is not a great plan, but what do I know, I'm just a retired public sector hack.