How the Lyin' Press feeds the narrative - PeterIke

"Say their names?" Shoot, easy for you to say. You speaky Korean. 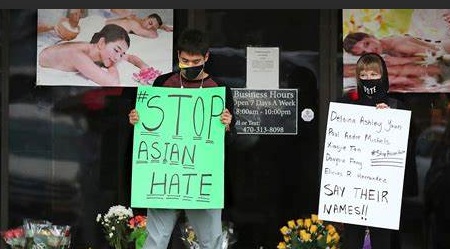 The Lyin' Press is apparently still working their Whites hate Orientals narrative, which they hope to get, what, a months worth of infotainment out of. Is the Kung Flu PanicFest losing Nielsen rating points? No problem with that, as we can roll it into this one. That's a point for another post.

As I wrote in the comments under the previous post, commenter PeterIke wrote what was to to be most of this post. As I speculated about the possible conspiracy that could be behind the extremely timely Atlanta massage parlor shootings (for the Lyin' Press, that is), it did occur to me that this wasn't THE perfect incident, as 2 out of the 8 victims were NOT Oriental. Why would you set up something and have that happens? Could it be to throw conspiracy theorists off your trail? That's going down a rabbit hole, I think.

Who knows, but PeterIke explains that the Lyin' Press can pick and choose the stories from all over this big country that go along with their narrative and leave the huge number of not-so-narrative-compliant stories alone.

Imagine if the narrative was "whites being attacked by blacks." They could have hysterical, 24x7 coverage every day of the year with a hundred incidents a day. But they have none whatsoever.

Now this guy could be some kind of CIA stooge, and I wouldn't doubt it. But it could also just be some "good luck" for the narrative engineers.

I also wrote this in the comments, but let me add it here, something about the sex trafficking etc. After all, if you're going to fill up your 24/7 infotainment time, you could use that juicy story about the massage therapists, what they do, what a "happy ending" means (sex sells, right?), etc. Nope, but that works against another big narrative they've been yarning up, which is "DIVERSITY UBER ALLES!" Yes, the sex angle is part of the story in terms of the motivation of Mr. Long. "Nope, can't use it", say the Lyin' Press execs, cause:

1) Sex trafficking, per the airline companies anyway, is about anyone, white guys, black women ... It could be just ANYONE, so be on the look-out! Of course, those of us who read a little bit know that it's Hispanics bringing people into the country, •Indians importing their personal slaves, and, yes, lots of this shady illegal alien indentured servitude or indentured sex servitude. This Oriental sex thing being such a huge widespread business ruins the narrative, hence "nuh uhh, can't touch that stuff..."

2) Along with that is the illegal immigration angle. If the Lyin' Press brings up this big story, American might realize that Hispanics aren't the only huge group of illegal aliens living in this country. (Sure, Hispanics must be a large majority, but I'd guess 30 million to a couple of million.)

So, they can't touch this stuff. Well, if you read comments here, this post is nothing new, so I apologize for that. The next one will be from some unz comments, so possibly nothing new too, but it'll be related to this same story. Now, we have that Boulder shooting that is not at all working out well for the Lyin' Press, once it turned out that the murderer had a last name with a punctuation mark in it. Nope, not a white guy - "shut it down, guys, we got nuthin'"

WOSL in Cincinnati just doesn't have the same ring to it. I think the author of that piece (Bruce C.T. Wright) is just upset that the cops didn't kill Mr. Al Issa. He implies that if Al Issa was Black! or brown the cops would have killed him. I guess he's never heard of Daniel Shaver.

I was a bit surprised by that photo of the little Oriental boy too.

☮
Moderator
PS: WOSL, not WKRP in Cincinnati, Adam? Well, someone's not reading his text messages. Maybe they aren't paid up on their subscription to the Journ-o-list on-line newsletter.

I looked at your images. I sure didn't expect the little Oriental boy. I'm hoping he doesn't know any English.
Adam Smith
PS: Good afternoon...

☮
Moderator
PS: I agree, Mr. Blanc. The "sex work" puts the feminists in a tough spot. I mean, it's nice entrepreneurship, which is a good thing, for WOMEN I mean. On the other hand there is consensual sex going on, in which men don't have to worry about getting divorce-raped "back".

In this case, the immigration angle is another big no-no for any use in the narrative being yarned.

Nah, you use what you can, and you don't print or broadcast what doesn't fit. All Lyin' Press media should put this up top of the page or in closed-captioning throughout their broadcasts.
MBlanc46
PS For all their wailing and beating their breasts about MISOGYNY, they pretty much keep quiet about “sex work”. Their own side is ambivalent about it. On the one hand, it’s EXPLOITATION of women. On the other hand, it’s about the EMPOWERMENT of women. So avoid it when possible, especially in the more popular media (newspapers rather than “scholarly” journals). So the fact that these “massage” parlors are brothels and the “victims” mostly prostitutes and procuresses was studiously avoided.