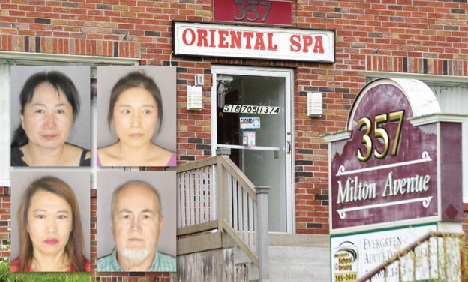 While searching for pictures of "massage parlor shooting victims", I got an awful lot of images of rows of older Oriental women in orange jumpsuits.

I'm guessing most Peak Stupidity readers have been bombarded by this Oriental massage rampage story more than I have been. The fact that there IS a media bombardment to begin with is only known to me from my reading of Steve Sailer, VDare, Instapundit, etc. I still want to get a few details before I write too much more, I didn't even get straight who the 8 people killed were because I think the media web sites didn't want to keep mentioning that there were anyone but Oriental women killed.

It is interesting that Steve Sailer had been posting a lot lately about the commonplace black on Oriental* crime, nothing new in particular, that the Lyin' Press has been blaming on White People. Oh yeah, it's because Donald Trump, President about 2 months back now, called the COVID-19 the "China Flu" a lot, riling Americans up against Chinamen or something ... OK, that's a different post to come.

Is it coincidental that just after a few months of the yarning of these white-people-caused black violence against Orientals stories, we had this multiple shooting by a white guy? I've had my discussions with commenter Mr. Anon before about plots vs. simple confluences of stupidity, but I gotta lean a little bit toward the idea of this massage parlor rampage being planned, by somebody. The timing was awfully good for the anti-white ctrl-left and the Lyin' Press. What does it take to do this? Do you brainwash the guy and/or drug the guy up in order to influence him to do this deed? How does something like this work?

This series of murders sure gives the ctrl-left a great opportunity to push for more gun control, get more Oriental people to become "woke", rail against Christians, take more money from White Men... this one's a Godsend for them. Never let a crisis go to waste, especially one that you spent a lot of time planning.

Or, it could be that there was nothing particularly nefarious here, and Mr. Long shot the ladies because they rubbed him the wrong way.

* I'm just going to use this term, because, though there may be •Indians involved in a few incidents, the incidents I've been led to by iSteve were all against Orientals, likely Chinese, most of them (simply because they are a majority of the Oriental people in America now). The Koreans must be big in this massage business, as 4 of the victims of the shooting were Korean, I think.

Moderator
PS: Re the schizophrenia, CB, and as related to Alarmist's comment about Kammy: You gotta worry about her qualification for being in executive office. After all, if she is Asian sometimes, yet Black some other times, won't these 2 ever be in conflict? What if that happens during her period, if she still has those, at a time of tension between the superpowers? Is Uruguay out of the fallout zone?
Moderator
PS: Alarmist, that's pretty funny to think about. How many Secret Service agents will be involved in this Dual-Leadership meeting to Atlanta? How much additional business will flow (eewwww!) into these massage parlors to secretly service the secret service. (Try saying that 5 times in a row quickly!)

Cloudbuster, Mr. No Name (or is it "Not Sure"), and Adam Smith, thank you for the information on that perpetrator of the Boulder shooting. He could be whitenized like Zimmerman, or a quick show of hands by Media Moguls could determine that the coverage be tailed off by end-o-bidness today... oh, except for the guns guns guns! They still need that part of it.

I wonder if there is somebody in the Lyin' Press specifically in charge of that decision. He's got his flip phone on him, like in a Jason Bourne movie, waiting for the call: "He's not white, OK, pull the story."
Cloudbuster
PS I haven't looked up any info on the victims yet, but given Boulder's demographics, I'd expect most of the victims to be White.
Cloudbuster
PS The boulder shooter sounds as if he was schizophrenic.

Right when we were virtue-signaling hard that "Islam is a religion of peace."

"Not just that, he also wrote “racist Islamophobic people” were "hacking my phone” and stopping him from having a "normal life.”"

Guess he should have stayed in Syria, away from the racist Islamophobes.
Adam Smith
PS: Afternoon Again...

I guess Ahmad Al Aliwi Alissa could be an honorary White...

☮
Adam Smith
PS: Good afternoon everyone... About that narrative...

"The 37-year-old woman was walking in lower Manhattan near midday on Sunday, on her way to a Columbus Park rally against anti-Asian hate crimes, when a man took her sign and tried to put it in a garbage can, police said. He then stomped on the sign. When the woman asked him why he did it, he punched her in the face twice with a closed fist."

"The attacker fled into a subway station at Astor Place. He was described by police as 6'1", 200 pounds, with a medium complexion, slim build and black hair. New York City's Hate Crimes Task Force is investigating the case."

Yikes, I almost fit that description...

Here's a video of the medium complexioned Hate Criminal in question...

This rise in anti-Asian violence is definitely because Donald Trump said “Kung Flu”.

So they can kiss up to the Asian community, diss Trump, and go for grabbing the guns; sounds like a liberal trifecta.

I forgot where I read this, but the article pointed out that this, the first joint trip by Joe and Kammy, was to commemorate the death of massage parlour girls. They also pointed out that Kammy was portrayed as a South Asian for this one rather than a mere bleck.
the man with no name
PS The shooter in CPUSA utopia Boulder, Commierado (Colorado) is being whitenized as the name is peaceful religion sounding.
The evolved immaculate lightworker being Hussein the Immaculate legalized all psyop kabuki theater with the NDAA.
Cloudbuster
PS MBlanc46: "Now we have an unnamed white male rampage shooter out in Colorado."

Oops. Turns out he was Middle Eastern. Down the memory hole.


https://twitchy.com/samj-3930/2021/03/23/breaking-boulder-co-shooting-suspect-identified-as-21-year-old-ahmad-alyssa/
Cloudbuster
PS: "Oh yeah, it's because Donald Trump, President about 2 months back now, called the COVID-19 the 'China Flu' a lot, riling Americans up against Chinamen or something"

Has anyone mentioned to the people spreading this that if you think that the people are so infantile that they can't be trusted to hear a simple fact without it riling them up to go commit murder, then how can you possibly trust them to vote?
MBlanc46
PS Now we have an unnamed white male rampage shooter out in Colorado. He took out ten in a supermarket, including the first cop at the scene. Perhaps this will take the attention off the Atlanta story. No aging Chinese whores, though. We shall see.
PeterIke
PS
Here's some of that slavery thing that we never, ever hear mentioned.

Yes, Harris the superspreader swings both or many ways, depending on who's been aggrieved this month.

One more thing, Peter. I wrote a post discussing my surprise at seeing a poster advising us to be on the alert for sex traffickers that WAS about Hispanics, "Truth in Trafficking Triumph":

https://www.peakstupidity.com/index.php?post=1720
Moderator
PS: Peter, regarding the sex trafficking and whole seedy massage, errr, "industry?" there are 2 big reasons the Lyin' Press isn't touching that angle, though it has a whole lot to do with this story:

1) Sex trafficking, per the airline companies anyway, is about anyone, white guys, black women ... It could be just ANYONE, so be on the look-out! Of course, those of us who read a little bit know that it's Hispanics bringing people into the country, •Indians importing their personal slaves, and, yes, lots of this shady illegal alien indentured servitude or indentured sex servitude. This thing being such a huge widespread business ruins the narrative, hence "nuh uhh, can't touch that stuff..."

2) Along with that is the illegal immigration angle. If the Lyin' Press brings up this big story, American might realize that Hispanics aren't the only huge group of illegal aliens living in this country. (Sure, Hispanics must be a large majority, but I'd guess 30 million to a couple of million.)
Moderator
PS: Well, Peter, you stole my thunder for at least part of my next post on this. I want to write about the fact that the victims were NOT all Oriental. That brings up a flaw in the "false flag" idea, which I was just speculating on because of the timeliness of it all.

As you say (and I was thinking of earlier this morning, I swear!) there are so many incidents of violence, petty crime, small bits of harassment, whatever they do go on every day. The media can pick and choose. Sure, there ar not mass shootings every day, though it seems close to every week, this week anyway. That's why I think, and you just wrote, that the Lyin' Press got lucky with this one, but I guess every bit of the Big Media establishment has its eyes and ears open for things like this.

Yes, any other thing similar that happened in Texas or New Jersey or anywhere last month or next week could be just as big a story as this. This one goes with the narrative they are in the middle of spinning though... perfecto!
PeterIke
PS
It's a big country. There's always incidents of all kinds going on. The media decides what becomes "important" to the narrative.

Imagine if the narrative was "whites being attacked by blacks." They could have hysterical, 24x7 coverage every day of the year with a hundred incidents a day. But they have none whatsoever.

Now this guy could be some kind of CIA stooge, and I wouldn't doubt it. But it could also just be some "good luck" for the narrative engineers.