To be more exacting, "blame it on the Global Climate Disruption™ " 🎶. (It just doesn't fit the meter of any song I'm about to write, is the problem.) 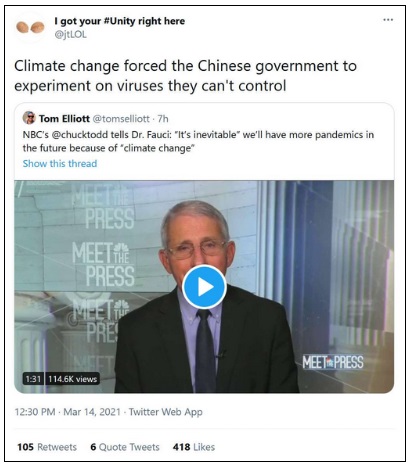 OK, look. I guess there's a guy being sarcastic in saying: "Climate change forced the Chinese government to ..." Is he jtLOL? Is he the same guy saying "I got your #Unity right here" or is that a different guy? Have I cut someone off? Twitter is stupid.

To clear a mistake up in the tweet above, this Chuck Todd talking head character (never heard of him before) said "People are saying ... " then the line "It's inevitable..." that the tweeter Tom Elliot, errr, tweets. I had to watch the video in this Washington Examiner article for 2 emotionally painful minutes to see what the deal was.

I'd only seen Anthony Fauci speak for perhaps 5 seconds before, maybe 2 or 3 times. That's why I write that it was painful to watch. As much as I recommend judging a person by his actions, not words, and much less his facial expressions, there IS something to be said for seeing a little bit of the guy talking. It's this know-it-all smirk on his face telling us "I am the expert, and only I know what's the problem and what we are going to do (to you) about it next." Fauci really looks happy there announcing that this pandemic business has him in such an important spot. He seems glad to be leading the panickers along in the next phases to come.

I meant to write this post to note that "Climate Change" tie-in. Peak Stupidity has had our say on the topic back near the beginnings of this blog. (Check the Global Climate Stupidity Topic Key.) We have been pretty quiet about it here, with a break in that for making fun of poor little Greta fall of '19 and winter '19-'20, figuring our understanding of the lack of a working model of the entire world's climate is SETTLED SCIENCE. Well, like a poltergeist, "it's baaaack..." No, not Greta, but the demon of "Climate Change", aka, "Global Warming", has been brought back from the near dead to become a bogeyman behind more pandemics.

They have proved that Americans can easily be brought under tight control. This is about control for these people, and for some, as per E.H. Hail and others, a religion. If I'm to go by the look on that asshole Fauci's face on the TV, just as much as his words over the last year, he enjoys the control Yes, maybe he enjoys being the Messiah too, because that could be messianic look in his eyes. I lean toward, he get's off on being looked up to by hysterical panicked Americans and being on TV every day as the resident expert.

* From old weather/climate classes: Weather is caused by uneven heating of the earth's surface. ** Can we push for even heating? We're gonna need bigger bulldozers ... to flatten the planet into a disk facing the sun. Careful with the surveying though - if we make it too thin out of the same volume of material, then we will run into the uneven heating problem, as the disk will be big enough for different parts to get significantly different sun angle. OK, then we make it a concave surface with the radius of one A.U. What about gravity? Hey, one thing at a time!

** We know, we know, weather is not climate.

Moderator
PS: Mr. Blanc, one of President Trump's favorite actions for me was his extracting this country from the BS Paris Climate Accords. That was likely because it was easy to do and didn't require any actual strategy - you just say "NON!" and don't sign anything. Of course, we may be back in ...
MBlanc46
PS Climate Change(TM) is back: Elections (even stolen ones) have consequences, redux.
dieter kief
PS

Fun fact, The Alarmist - Anthony Fauci might be your Rocket Man!
Tony Montana
PS Chiquitastan (USA) is like a great big WAP just waiting to get plucked.
The Alarmist
PS

The Earth is flat enough ... we just need a big rocket to properly tilt it, like a solar panel, toward the Sun.