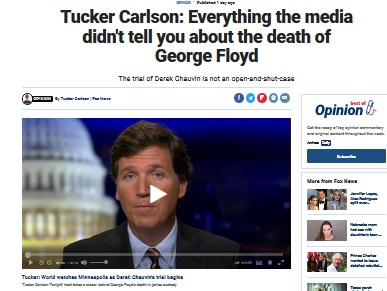 What would we do without at least this guy?! I mean that even for us non-TV-watchers. Watching his clips on youtube makes me think that not quite 100% of the Lyin' Press is the enemy of the American people.

VDare's Allan Wall steered me, here to the Fox News website, where one can either watch the 16 minute segment from Mr. Carlson or read the transcript regarding Everything the media didn't tell you about the death of George Floyd. Now, Peak Stupidity readers have probably all read just as much as Tucker has learned, from VDare, iSteve, and even got details from pre-pulled youtube videos. The rest of the country is not necessarily so informed, and Tucker can help a lot.

I am not going to follow this whole trial, seeing this for the infotainment that it really is. We'll probably have a few posts on it now and then, but for right now, besides the Tucker segment, John Derbyshire already has a piece of his Radio Derb podcast up on the Unz Review called The Chauvin Case—David vs. Goliath in Minneapolis…and In America. Besides his opinion, Mr. Derbyshire steers the reader to a couple of sites written by lawyers in which this case can be followed, Andrew Branca on Legal Insurrection and Scott Johnson on the PowerLine blog.*

Haha, lawyers and rule of law - are they still a thing? Everyone knows that everyone involved in the trial has the shadow of more rioting around the country hanging over him. I don't care what riots occur in Minneapolis or elsewhere, the guy Chauvin deserves justice. I don't have my hopes up. The O.J. thing was almost 30 years ago. Racial relations are sure not any better now.

What comes to mind first when watching this shocking truthfulness from Tucker is controlled opposition. No, wait. That's not my thoughts - it's just that every damn time I read about someone heard telling truth like this, the first words out of bloggers and commenters typing fingers are "Controlled Opposition!!" What the hell? Sure, a guy like Tucker doesn't go too far. Right now, if he did, he'd be off the air, and we couldn't hear ANY truth from him (at least the TV watchers couldn't).

I wanted to paste in an excerpt, but it's hard to use just one part. I ask the reader to read the whole thing, or watch. Reading takes about 20% of the time, at most, but it can be nice to listen to a sane voice too.

Since that Fox News segment, I've read of another great Tucker Carlson moment on iSteve yesterday, in Pentagon: Press Secretary Smites Fox Host. That's a subject for another post sometime, though the reader may want to read the quick one here, Warrior Outreach.

* I'm not linking, because, though I think I liked the former, I'm not sure about the latter blog. Anyway, Derb's got plenty of links, which is VDare is VERY big on.

Yes, obvious enough kind sir...
(Sometimes inflection gets a little lost in a message box... But it's all good...)
Just riffing on a motif...
And otherwise saying that which we already know and agree upon...
They came from Chicago and elsewhere...
I agree. I agree whole heartedly...
VDare is good people..

☮
Moderator
PS: Mr. Smith, I don't know if it was obvious that I was being facetious, but yep, lots of Somalians but also, per Steve Sailer and you just now, the better welfare benefits up there (Wisconsin too, I believe) encouraged some of the American black people to come up from Chicago.

Regarding the reversion to near open borders, though I don't keep up with some things, the immigration issue is one I have kept up with on VDare for ~ 20 years now. I probably know more details on it than 95% of the Americans that are on our side. VDare is good people - very civil, the website is edited to near-perfection with loads of links, etc.
Adam Smith
PS: "I wonder what did it?"

How many Somali refugees do you suppose Minneapolis can import before it starts resembling Mogadishu?

Which reminds me...
Check out the future Americans at the southern border...
Seems word has gotten out that JoBidet is the "Migrant President"...

If only we had a Big Beautiful Fence as a deterrent...

@The Audacity Of Hype

I agree. Seeing the riots that broke out across the country and continued for months, and all occasioned by the death of an ex-con drug-dealer low-life is when I knew that the country was finally, irrevocably gone. It's over. Dead.
Moderator
PS: Trotsky came up with that? Who were those Russians supposed to be racist about?

It's amazing to think that we are talking about Minneapolis with all this, Mr. Hype. I could see the story being about Chicago, Atlanta, or Baltimore, but, man, that place has sunk a long way since they started diversifying... I wonder what did it?
The Audacity Of Hype
PS Comrade Trotsky came up with racism to destroy the once great republic once and for all.
He laughs with Marx in the fiery furnace as their lasting curses are about to erase the last best chance for liberty.
Any society that elevates "side hustle" porno stars high on Fentanyl (hecho en China) with a mile long rap sheet is thoroughly and fundamentally destroyed.
The autonomous zone is already up in Minneapolistan and utopia will commence with some burning and looting.
The smoldering heap of charcoal stench ruins will be renamed...Utopia.
Forward! Yes we can!