Posts come to me out too often to remember them all these days. Often lately, it's at the park where the ideas come from. This time, however, the post has not a thing to do with the Kung Flu and associated PanicFest. This title, BTW, may not make complete sense, but that line, appropriated by Elaine Benice in Seinfeld always cracks me up. 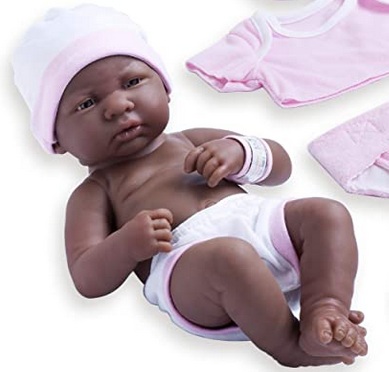 I don't know if my mouth hung open for very long seeing this or not. See, this is a nice neighborhood. Even the couple of black kids (one is 1/2 white) don't seem to have extra aggression or cause any trouble. The park is 90% full of white and oriental kids.

We don't have kids young enough for the plastic slides and all that, but the older kids still use if for tag, battle with sticks, etc. As I walked by that playground area to sit down somewhere, I saw a little white girl, at most 3 1/2 y/o, holding a black baby doll.

Let me make it clear. The little girl was truly white, as in with blond hair even, and, well, just plain white. The baby doll was truly black, not some type of ambiguous color with ambiguous features. I can't tell on the doll in the picture above (for sale at amazon, if you're interested), but the one I saw had short curly hair even.

This girl was at the park with her Dad. I don't recall if I've seen them before, but the skinny, bearded, Millennial Dad was white, and the mom, who may or may not be someone I've seen before, would have to be white.

What the hell was the deal? Seeing as this is a nice area, I would have a hell of a time believing that this girl's parents couldn't afford a white baby doll.* No, this girl was given a black doll as either extreme virtual signaling by the parent(s) or maybe by some friend at a party just to fuck with them. "Hey, I didn't see your girl with my birthday present. You're not racist, are you?" (Mom proceeds to have a long discussion with the little one about how she must carry this around till it breaks, hopefully very soon, honey, or your Dad might lose his job.)

If it's the latter deal, well, things have gone pretty far in this Orwellian country of ours. If it's the former, I think the parents are nothing but sick in the damn head. It's natural for a girl to want to pretend to raise a baby of her OWN kind.** That's it, Mom and Dad, make your little girl sad to show your virtuous nature. Steve Sailer had a nice post on something along the same lines a few weeks back Liberals Have Been Making Children Cry on Christmas Morning Since 1969. That was about forcing stores to keep toys integrated by gender. Sure, that's stupid, but we can get past it. What I saw the other day was sicker than that.

PS: I had a great scene from The Office planned to go along with this video, involving HR guy Toby Flenderson, black employee Daryl, and a black baby doll. Youtube doesn't have it, and neither does BitChute. I don't blame BitChute for PC on this - they don't have nearly as much of this stuff as youtube does. Damn! It would have gone right along with this post - humorous and cringeworthy at the same time. If you are a fan of that show, you will probably remember this one.


* I write that in a joking manner, and additionally, there are probably price controls on this sort of thing by retailers to avoid big trouble. Then there's ebay .... haha.

** If you're an interracial couple with a doll dilemma, I don't know what to tell you two besides "let your little girl pick" Oh, excuse me, or little boy, if you want to do other kinds of experimentation with your kids.***

*** Sorry, the video in that post is again one wiped by youtube. However, there is the info in there to find what I refer to.

So, I found a proper copy of The Andrew Show Episode 3...

☮
Dieter Kief
PS Mod - ahh - I don't know anything about the "gone" comment. "Mr. Merkel" is well-meaning , believe me; she - may I say: Loves Barrack Obama (I think it's mutual) and Bill Gates too and - she is a true Protestant, - don't underestimate this. Protestantism means not least to be willing to suffer in order to reach the higher goals. And she does have higher goals in mind: No. 1 - world peace. No. 2: World relief, so to speak, by making our only world so to speak an ecologically sound place. She really is humble and unspoiled on many levels. She does not care about property at all. She has a weekend home in the country, which your usual dentist would simply refuse to set foot in because it lackss class, it totally lacks class and style... etc. pp.So: In a way she simply wants to be good (I think, that's true for Bill Gates and Barrack Obama too). Now comes my main point - a German saying: The way to hell is plastered with good intentions. - Another point is: It is funny to watch how close to - hehe - peak stupidity bright people can get (on a more serious level, this s one of my systemic points of interest, when it comes to understanding (and then maybe: explaining too) how western societies - do not necessarily work that well.

(One time a comment reached me via mail, that was not there on iSteve - turned out, that the ccommenter had retracted it, because he feared he might have given away too much personal information since he outed himself as - may I say - a tasty and rich art collector. He is one of the 5000+-commenters.
The Alarmist
PS ... aaargh ... missed a ‘g’

re Ms. M., one word: Ossivergeltunswaffe.
urbando
PS I don't know about you, but that doll picture really creeps me out. I didn't realize it was a doll until I read the post. My kids are grown and my grandkids are boys, so I haven't had to go doll shopping in many moons. Raggedy Ann dolls allowed children to *pretend*; this thing is too real looking. Of course, the actual point of the post is well taken. I imagine that the parents are progs, but who knows?
Moderator
PS: CB, I'd guess the black partner in that type of interracial relationship would have the upper hand, but, yeah, do they care about the kid or not?

Mr. Blanc, it does, but at least for most people it's something that starts in the schools (even preschool) which they will say they can do nothing about.

Yes, "culturally destructive" people is what you could call it, Peter. I'll say that the doll I saw wasn't quite so resentful looking, haha! I wasn't about to take a picture.

That's funny, Alarmist. Do you mean a cheap Chinese knockoff, in which the reverse-engineering was done on the cheap so Barbie's face is ugly and her tits start sagging after a day of, errr, use?

Dieter, what did I tell you about Herr Merkel. I don't think she just made that million-refugee mistake. I think she is evil. But I don't speak German, so ... BTW, I saw a guy reply to one of your comments under iSteve, but it was gone. Was it deleted, or just a screw-up somehow? If it was deleted, can your reproduce it here, for the most part? (I just want to see what gets moderated by Steve Sailer, if anything.)

Mr. Smith, I'l check those vids out a little later. I can count on some amusement, I'm sure.

Adam Smith
PS: Has anyone watched "I'm Sorry" on Netflix?

Does anyone remember The Andrew Show? A Show For White Kids.

I can't find his good stuff, seems youtube memoryholed most of his videos...

Here's a snippet from the video I was looking for...

And here's a clip from one of his few remaining videos...

So pretty much don't race mix.
Be White and proud. Tune in next week.

☮
Dieter Kief
PS
PS Guess what: Affirmative action has a speaker in Berlin. Chancellor Angela Merkel invited to a conference about - integration - and it turned out, this young man knows exactly what that should be about: Compensation payments and (subsidized) job-offerings for those discriminated against.His list is long, of course: At 1:28 in in the video. This young gentleman, Daniel Gyamerah, is talking German, but if you give him a few seconds, you will get the vibe - no matter if you speak the language or not.
(I'm quite sure he would agree, that nobody knows the consequences yet if kids are not being racially integrated from very early on -  - -

Angela Merkel made it very clear at this conference, that she wants equality not only of chances,  but also of - outcome. - And I must say: Yeah, right, wouldn't it be nice?

(For some reason, I hear The Kinks now, playing in my ear: Sunny Afternoon....
https://www.youtube.com/watch?v=TYIl6n_SRCI
The Alarmist
PS

That’s crueler than getting a second-string knock-off Barbie®️.

PeterIke
PS
Even the black doll looks pissed off and resentful. "Where my reparations at?" it seems to be saying.
PeterIke
PS
Ooooh-fah! This kind of thing makes me nutz.

I'd say if you followed them home, you'd see a rainbow flag, black lives matter sign, or some other clear proof that they are demented Progressives. My guess is that one or the other of the couple works in edjumacation. It's sick and self-destructive. Why are whites so culturally suicidal? Why is it so difficult for them to recognize it in themselves?
MBlanc46
PS The indoctrination is starting very young.
Cloudbuster
PS "** If you're an interracial couple with a doll dilemma, I don't know what to tell you two besides 'let your little girl pick'"

The White in the relationship probably has bad decision-making skills so won't listen to me, but my advice would be: White dolls. You want the kid to associate with the race responsible for Western civilization.