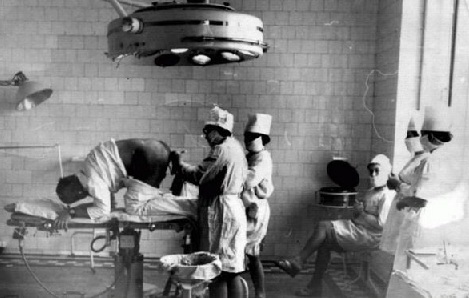 (Image is slightly old. It's very hard to get file photos of proctological procedures... quite understandably, I suppose.)

BEIJING (Reuters) - Some Chinese cities are using samples taken from the anus to detect potential COVID-19 infections as China steps up screening to make sure no potential carrier of the new coronavirus is missed amid regional outbreaks and ahead of the Lunar New Year holidays.

If at first you don't succeed, try, try again.

The Chinese have become very organized and efficient since they shook off the hard-core Communism. I wouldn't be surprised if they had robotic mobile proctology stations built and set up at airports and train stations by now. Failing that, there's this guy: 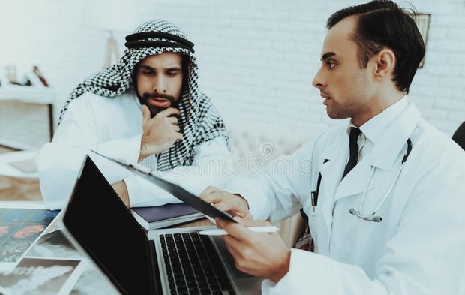 Hey, I think I know this dude on the left ... he comes through our bank drive-through once in a while ... drives a brown Probe.

"Dr Bendova, calling Dr. Bendova, put on your gloves first, and pick up the white courtesy telephone. You are needed in the Customs hall, stat!"

Covid Comedy Movie idea with the Covid-Anal-Probe Enforcement Unit as the villains, see comment at:

I hope this message finds you both well and fat and happy...
With a smile upon your faces...
And love surrounding you and yours...

"Out of an abundance of caution, we the town council had to COVID-anal-probe the uncooperative Mr Smith."

Crazy satire and dystopian parody, or a realistic trajectory for the Corona-Panic?

Roadside Covid-Anal-Probes?
Please, Mr. Hail, don't give them any ideas...
But yes. You are correct. Uncooperative.

Uncooperative is a good/mild way to put it...
But, to paraphrase...

They can Covid-Anal-Probe me when they take my guns from my cold dead hands...

Which, coincidently, is right around the same time I'll take their poison needle...

Not to deny the fact that your dystopian coronapanic scenario isn't realistic...

It could theoretically even be set off by one incident:

"Out of an abundance out caution, we the town council had to COVID-anal-probe the uncooperative Mr Smith." Mr Smith sues. Controversy. Then, if the Pro-Panic side still has enough life-force in it, some wacko town council or somewhere pass a law stating that all who refuse the vaccine must submit to COVID-anal-probes before starting at a job, airport arrival, whatever, enforceable by police order.

Maybe some of the most hardline Pro-Panic places will kill two birds with one stone by demobilizing half their police force (to Fight Racism) and then remobilize the same to run roadside vaccination checks, with anyone who refuses to comply arrested by these Anti-Covid Special Forces and sent to the local Covid-Anal-Probe chambers.

☮
Moderator
PS: I screw up my comment, Peter. I meant to say that they had their LOCKDOWN phase, but I doubt they planned that the US would run with this stuff too.

Adam, that was hilarious too. "When we get done with the probing, your phone app will tell you whether you're free to go... to get fitted for a tuxedo." If you're gonna walk like a penguin, you might as well LOOK like a penguin, is what I say...
Moderator
PS: Mr. Ike, if they did plan the American form of the PanicFest, they are genius. Like a lot of things, I think they did their hardcore LOCKDOWNS over there. Problem is, they have the 'Rona still all over the place, hence their phone apps, but don't tell Ron Unz that! I'm sure they were very pleased that the American pols and media ran with this horror infotainment for a year, and of course, very amused.

I have indeed heard that particular Arlo Guthrie song. Something about "chicken flyin' all around the plane". I listened to it on the same album that had "Alice's Restaurant Masacree", but perhaps that was a greatest hits album.
Moderator
PS: Mr. Wong, I didn't see that movie. Do you have a link to bitchute or youtube? We had our chance to laugh at the Chinese in the last century. He who laughs last ... reads Peak Stupidity?

Mr. Hail, accidentally, hahaaa! Not funny, haha... (Had a Chinese professor long ago with that "not funny, many people die ... haha...") A clerical error ... just a wrong box checked on your form, now Bendova. We fix this for you. "Anal-COVID-probe-gate" - not making a stink yet in the Lyin' Press, eh?

☮
PeterIke
PS
I gotta figure that somewhere in China, the higher-ups are laughing hysterically at how they got the entire West to bite at their wormy Covid bait. Imagine getting your competitors to shoot themselves in both feet, and multiple times over. And still a year later people are talking about "we must DOUBLE mask!" It's got to be the most successful psy-op in history.

I can see why Anal-COVID-Probe-Gate got relatively little attention in the Pro-Panic US media.
Sum Ting Wong
PS The Robert Stack voiced FBI (LOL!) character from Beavis and Butthead Do America comes to mind when he tells his underling to go full Roto-Rooter with the latex gloves.
We pwn you now Baizuo, you Aso!
Will the CCP's PLA have tranny troops in the spirit of unity?
It is OK to laugh at the Clown World and it is a morale booster.