The Devolution of CNN 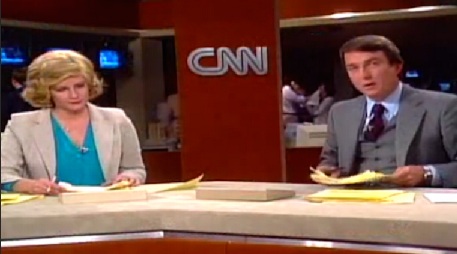 In reply to commenter Buzz Mohawk about CNN on an iSteve thread, I gave my thoughts on what is now a big part of the enemy establishment. I don't know all of the corporate buy-out details and what-have-you, but I do recollect a good bit.

When CNN started out, the first day of June in 1980, the idea was to just play the 1/2 hour news over and over so that people could watch “the national news” at other times than just 6:30P, Eastern, 5:30P Central, etc. Of course, they could update stories over the course of the day, while the big 3 networks had their whole schedule of TV shows for the day, so would have to wait until the next day’s slot, unless a President got shot or a a volcano blew up.

The latter would really piss people off, because when you missed 7 full minutes of Maude for some Guyanan murder/suicide story, you’d have to wait 1/2 a year for the reruns to find out what funny line she said to Walter and whether you missed some cleavage of their show-daughter.. Bastards!*

6 years ago a site called Mental Floss published this short article about the first day of CNN. (That's where the picture above is from, with the husband and wife co-anchors David Walker and Lois Hart.)

I’m pretty sure I was off TV already when CNN slowly morphed (or I didn’t have cable anyway), but they started making different types of news shows. I don’t know how much opinion was in them at the beginning vs. reporting, but now most shows now seem to be more opinion than reporting.

As a couple of commenters on that thread mentioned, CNN got their big "break", as it were, with the Gulf War I in 1990-91. I can remember the coverage of those smart bombs, the retreat of the Iraqis in a rout, and Colin Powell. It was a heady time for Americans, the sole superpower for only a few years at that point, and this was supposedly a just war. It was obviously a good time to test out weaponry, for "shock and awe", which only greatly encouraged the Necons. That was all show to lots of Americans by CNN.


The founder of CNN, Ted Turner, and main squeeze: 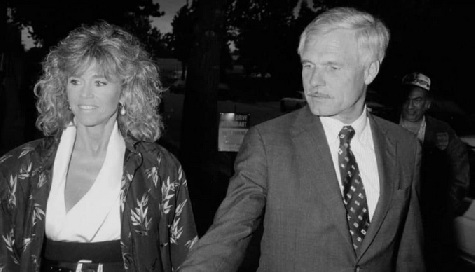 This network could not have gone ctrl-left just because of Ted Turner's turning from a Southern gentleman. After inheriting his father's billboard business worth $1 million in the early 1960s (about 10 million of today's dollars), Mr. Turner started acquiring radio and then TV stations. He started working on the CNN network in 1978, it went on the air in summer of '80, but the network has been run by others since just before that Gulf War I time. Turner may have turned lefty (to some degree, not in all ways) due to Jane Fonda, but we can't blame modern-day CNN just on that one radical.

Because they got so big, and they wanted to gain viewers, CNN realized that just news reporting was not enough. You’ve got 24 hours to fill, every day, on and on. The type of stories that would have been reported on 5 minutes one day, and then maybe had additional 2 minute follow-ups for a week back in 1975, became dragged out at 2 hours a day coverage for MONTHS. Much of that would have to be opinion to fill up that time. Dave Letterman used to kid with this word (I thought it was funny), but CNN programming is the very definition of Infotainment. That is our term of use for the Lyin' Press TV media of today here on Peak Stupidity.

There was no room for a real run-down on Ted Turner, but I'll put this quote below from some kind of Doomsday video he had out at some point. From Wiki:

Turner famously stated: "We won't be signing off until the world ends. We'll be on, and we will cover the end of the world, live, and that will be our last event... we'll play the National Anthem only one time, on the 1st of June, and when the end of the world comes, we'll play Nearer, My God, to Thee before we sign off." Reportedly, Turner plans to make good on that promise.

No, but CNN is working very hard on that promise, as a de facto branch of the US Feral Gov't and the Globalists.


* Yeah, I wrote that bit about Maude without checking, but the Jonestown, Guyana massacre/suicide was 1/2 a year later than that show ended. Since we spent some time on this, that story, from ~ 40 years later is discussed on Peak Stupidity in Drinking the Kommie Kool-Aid - 40 years back, with a Part 2, Part 3, and Part 4. Maude's TV-show-daughter with the big tata's was Adrienne Barbeau, dba Carol.

less_than_zero
PS. Thanks for the mental floss reminder. I had a script before they scraped it.....just saved the webpage.
Moderator
PS: Bill, he's not still sailing, right? I assume that was long ago.
Moderator
PS: Mr. Anon, I wrote you back under that other post (on the Kung Flu), but let me also add something here I forgot. (Well, it relates to the dogs, such as in Dtbb's clip.)

We are cat people, for the most part. They can't be the friends that dogs can, but at least you get to hang out with someone else who has usually had enough of other people too. We will get a good dog, or two, if we get more room, per what I wrote you. Believe me, I really know how you feel on this.
Moderator
PS: Mr. Hail, for me, from 1999 to the present is only observation gleaned from being at someone else's house, the bar (with the sound off anyway), and then the bombardment at the airport terminals (going away to some degree). I have had no TV (except for the use of the monitor for watching DVDs) sinc '99. Before that, there was a 4 year period during college, plus one more year of no TV also.

My last bit about the airport terminals is related to your 2nd comment. CNN gets their viewers via almost mandatory viewing or at least listening by people in airport terminals, in bars, and even in auto parts stores. (I have a number of posts about "force-feeding of TV" with the TV topic key, Mr. Hail, if you want to take a look - the one in the auto parts store was kind of humorous - for me, not the others involved). OK, here it is:

There's a lot more of posts like that, some involving exercise machines.

Yeah, foreigners could be forgiven for thinking CNN is basically the Voice of America.
Moderator
PS: I'm not sure I've seen "Escape from NY", Mr. Ganderson, or I've only seen a part. Thanks for the suggestion.

Dtbb, same there, haven't seen it, so I don't quite get your take on Sailer's blogs. I love the skunk dog though!

Mr. Brainz, since this Global Climate Disruption™ business got big, I can't even be sure the weatherman won't lie to me, ESPECIALLY on CNN. I do trust Flavia and that Mexican chick that Mr. Alarmist watches. They wouldn't lie, right? How would we know, anyway? Really, I wouldn't mind either of them lying, so long as it was face up (or OK, down) on the bed.
Bill H
PS You just had to bring up Ted Turner while the Americas Cup is in progress. I followed Ted's sailing adventure with a great deal of glee, and cracked up when North would not sell him any sails.

The Kiwis and Italians are tied 2-2 at this point, freaking out the announcing staff which expected New Zealand to win 7-0.
Mr. Anon
PS

I was without a TV during most of the 80s. I only got one in 1990, and I started watching CNN for the Gulf War Show (that was a good series - very entertaining). Well for that and for Bobbie Battista, who I thought was a pretty hot anchor-chick.

I was foolishly naive at the time, believing that what one saw on TV News broadcasts reflected reality, whereas in reality it reflects what the people in power want you to think of reality.
Hail
PS

Another thing about CNN is its substantial pull globally, far outside the US marleft, as a kind of US equivalent to "BBC World News," giving the supposedly "American perspective."

The majority of the hundreds of millions of consume CNN World in some form monthly probably don't have much or any idea about what it is, assume it's still more-or-less 1990s-CNN, have little or no idea that at least half of core Americans consider CNN hyper-partisan, many seeing it as extremist.
Hail
PS

“The Central Intelligence Agency owns everyone of any significance in the major media.”

— William Colby
Dtbb
PS: For perspective on Sailer's recent blogs.
https://youtu.be/_eyss6tDHz8
Ganderson
PS. Adrienne Barbeau was in one of my favorite movies: Escape from New York