You really gotta wonder about women voters. They trend Socialist in general, and once you go Socialist, you're on the road to the hard stuff. Socialism is a gateway ideology. I understand that women vote this way due to FEELINGS and compassion, but if they just were to think a little bit ahead and really envision Communism, they should recoil at one of its worst evils. See, Communists are known to wear "dull, olive-drab clothing", and often clothing selection is limited under Communism.

Women HATE dull colors and HATE HATE HATE wearing the same clothes again and again, say like just 2 weeks since the last time or something. Can you imagine how it was for them during the hard-core Commie era in Red China? It must have been a real struggle session. "Honey, three of our women's Red Guard unit were wearing the same jacket as me, and there were only four of us, and we all had the same hairstyles! It was SO embarrassing!" 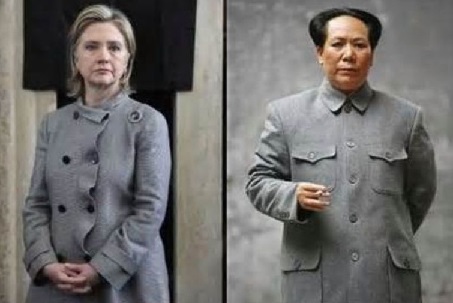 "We have both colors, Ma'am, blue AND grey."

"This is from the People's Heavy Jacket Factory # 2 catalog, Sir. Do you recognize it?"

"Do I?! This jacket is perfect for a hard-working revolutionary. Deep hand-sown outer pockets hold pounds of colored chalk for writing Big-Character posters to hang on the necks of Capitalist Roaders... yet, this jacket, made out of fine American Red-Cross emergency blanket material, is still light enough to wear through all day struggle sessions in those warm Peking summers. The look says 'rugged Communist Revolutionary on a Long March', yet it is elegant enough for a Gang of Four Politburo banquet. Created with fine Chinese craftspeopleship, it features a wide collar, perfect for those nights spent under the stars at a Manchurian pig farm, an inner pocket for that Little Red Book, and comes in blue or grey."

"Mao Peterman, Miss Tang. You know, a woman like you ... The Inner Party could really use another concubine like you, Qlin Tang."

Now for a man under Communism, if you can get past the family destruction, economic devastation, purges, and gulags, the fashion situation is quite nice. "Sir, my t-shirt, outer shirt, pants, underwear, socks, and shoes are all worn out. I would like replacements please." "Here." "That was easy!" [Mashes People's Stationary Store #1 big Red Guard button]

Cloudbuster
PS Mao wears it better.
Moderator
PS: You do wonder how those Communist thoughts just grew out of that time period and those couple of German rat bums, T.I. Geeze, I would hope at least we can have better vehicles this time around!

Mr. Ganderson, yeah, that was part of the same episode I have the Santa Clause clip in, liked to in this one. Damn funny, IMO, and as I wrote there, it was a time when even NYC Jews admitted that Communism was a big failure.

Mr. Blanc, women really get into that fashion stuff - some perhaps would rather starve than wear a pantsuit that another woman at work is wearing. ;-}

Alarmist, chicks are told that fat asses are beautiful by the woke magazines now, but they don't take it to heart, unless they are really big already. The great thing under Communism, is that all asses are equally fat - and firm, like powerful East German swim team.
The Alarmist
PS

Look at the bright side of communism:

Your wife never asks you what she should wear.
She can’t complain she has nothing to wear unless the pantsuit is threadbare,
It is unlikely she will ask you if her butt looks fat in whatever she is wearing (I’m and older dude ... do chicks still worry about a fat ass, or do they all want one now to go with their platypus lips?).
MBlanc46
PS I imagine that, with the starvation and the gang rapes by bands of marauding Men of Color, lack of fashion choices will not be uppermost in their minds.
Ganderson
PS

I remember when Elaine bought a colorful shirt for her commie boyfriend.
Trotsky's Icepick
PS The best a maam can get. It is so sad that manboons is not a learning animal and we are still grappling with the failed ideas of a Satanic 19th century German rat bum.
They aren't a failure after all, if you intend to burn it all down and mock everything good in grotesque parody that would make ol' Scratch proud.
We'll all have dull grey jumpsuits to go with our mule pulled Zil or Trabant parked outside the comrade's hovel.
The kommissar will bring the rations and UBI EBT cards by each month and you can get an increase if you rat out those hillbilly kulak deplorable thoughtcriminal scum.