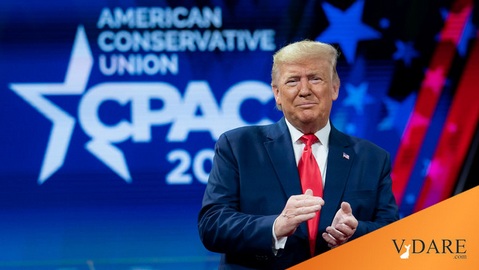 On the VDare site today I see this encouraging article A Good Sign: Trump Adviser Says The Donald's New Focus Is Immigration. Yeah, that's pretty encouraging, I mean, it'd be if the year were 2017 or '18 or even '20 with a Hail Mary effort, from Donald Trump when he was the FREAKING PRESIDENT!

Lord knows that Peak Stupidity has given President Trump some well-deserved criticism over the years, but then we've praised his below-the-radar efforts too. (See Said in Spanish - Allan Wall with some encouragement, Give Trump a break!, and President Donald Trump: the Bad, **the Good**, and the Ugly with most of the info. gleaned from VDare.) The problem is that, because Trump was no strategic thinker, meaning he got almost no help from the Congress, the American people (because he didn't ask), and even his own staff, most of his moves are ones that are easily and completely reversible.

Zhou Bai Dien started this reversal process his first day in office. "That was easy!" [mashes big red Staples button] In the meantime, I see from this article and a previous one by Washington Watcher II, Trump Hits Immigration High Notes At CPAC, that Trump is all about the immigration problem now. OK, so, in 2 years (because this article is more about '22 elections) we can get some long overdue changes, right? In the meantime, a couple of more million anti-White lefty immigrants will be here, and that's if we're very lucky! If any kind of Amnesty passes, it'll be lots more. So, for 2 years, the GOP can do what they do, which is making sure the ctrl-left gets only 2/3 of what they want done, done. Then, with worse demographics and an D-squad embolden by cheating that can't be fought except by INSURRECTIONISTS!, we'll all go hopefully to the voting booths... Sure, I'm encouraged...

We're not voting our way out of this. It's great that Trump, as an individual public speaker now, is reminding Americans of this existential problem. Many Americans really may have forgotten or think that President Trump had solved this problem. ("Last I recall, he said he would, and he got elected, so... haven't read much about it since ...") I am not at all on writer Washington Watcher II's case. He is one of my favorite writers on the great VDare site, and has, in fact, laid out the evil that is the group occupying the Biden Administration now, just the other day in Touting Their Immigrant Ancestry, Biden’s Appointees Commit To Open Borders—And the Great Replacement. VDare writers are ever hopeful and encouraging, and they can't exactly write about things that need to be done outside the political realm.

I just wrote this post because I couldn't comment on VDare. My comment would have been: "That's great, Mr. Trump, but WTF were you doing the last 4 years, asshole?"

Moderator
PS: Mr. Hail, I also respected Scott Walker for his being a stand-up Conservative in Wisconsin. I followed those goings-on there with the school unions and all that. I'm sure he would have been a better President than Trump. I don't know if he could have gotten there though. You and I are not the typical American GOP voter. Trump's demagoguery, as you maintain, definitely got him there.

I knew Mr. Trump was no Constitionalist or any kind of principled man when I voted in '16 (even went to a rally), but he hit on the existential* immigration issue. I still believe that Trump cares about this issue, but his years of experience of being a bullshitter and his total lack of strategic thinking made him fairly useless in solving this problem.

Did Trump really not care about the issue? I think he did and does. Of course he took advantage of the publicity and support that he got in summer of '15 due to his caring a little bit about traditional Americans. He was just incompetent as President and thought his mouth was all he needed to get things done. To me, it was not quite demagoguery by your definition. Just my opinion, Mr. Hail.


* It really is. If we don't (since we didn't) put the kibosh on the invasion, what's the point of all the rest of the issues? It's not our country, anyway, by some point ...
Hail
PS

I wrote on these pages around last August or September, I think, that I wasn't sure it was worth voting for Trump. In the end I did vote for him, but without any enthusiasm.

In reflecting on the events of the period early 2015 to late 2020, a six-year span, I have often thought that a better possible outcome in 2015 already have been Scott Walker winning the R nomination and the presidency.

I can see the arguments against this President Scott Walker scenario, but there is a strong argument for him here: Walker was morally serious, and the only one in the field in 2015 before Trump who talked about immigration-restriction. The Trump-era immigration-gain table-scraps VDare likes to celebrate I can foresee easily exceeded by a Scott Walker presidency.

In short, Scott Walker was not a demagogue.

Walker at times had a significant following but his base largely deserted him for Trump in summer 2015, prompting his dropping out of the race Sept. 21, 2015.
Hail
PS

I've used the word "demagogue" a lot more the past twelve months than I otherwise do, to refer to political Corona-pushers / Lockdown-pushers, many of whom I am certain understand well that the measures are over-reactions. Overused or not, the best descriptor I can come up with is that DJT in politics was/is a demagogue.

I'm not sure what the average person who hears/reads the word demagogue here in the 2020s understands it to "mean," or understands what I intend it to mean. To me it means a leader, or someone at the front of a pack anyway (if that is a leader), who cynically tries to whip up negative emotion and argues from bad-faith, much more interested in inciting people and riding the wave to power than in actually solving any kind of problem. The Internet-era problem of the 'troll' is similar if on very different scale.

In the words of one of the big R-Team operatives (Roger Stone?) which John Derbyshire likes to quote: Signaling about immigration-restriction from an R-Team team-player is usually "boob bait for the bubbas."

Trump should just go away and play golf.

It was always just all about him. He's a blowhard, a moron, and a narcissist.
Moderator
PS: As a leader of the American patriots, yeah, I hope Trump ends up a part of the past soon. I don't know if any real leader will be a politician at all.

I'm still glad Trump is around pissing off the ctrl-left though. I would still go to a speech were it near me, I suppose. I'm not giving them any money.
MBlanc46
PS Bully for him, as we used to say in the Antediluvian era. If Mr Trump wants to say things that should be said, good on ’im. But Mr Trump is the past. He did what was in him to do. We should not let him become a distraction from what we must do in the present and future: Devise a way to salvage what can be salvaged of Western civilization in North America.