The movie Dog Day Afternoon was one of the 2 references on which Peak Stupidity based our 1st attempt at a screenplay, in the post All I hear of, is Lady O'Gaga.... This post is not very much of a review, as I've watched many thousands of movies, and I can't be on here reviewing them all. However, there's something woke before its time in that movie, and that recent post made me think about it.

I don't want to spoil the movie for the reader. That's not because I'm such a nice guy but more because Dog Day Afternoon is a really good movie. I'd put it in my top 100 out of those many thousands. The movie is about a bank robbery and resulting standoff on a hot summer's day in New York City. Al Pacino stars as, Sonny one of the two (originally, 3) bank robbers. The other guy is Sal (shown in the images in that Lady O'Gaga post). 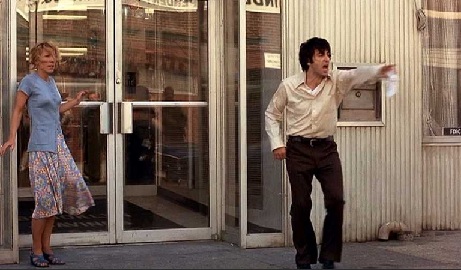 What I remembered is this: Dog Day Afternoon has a scene with a guy who wants to change into a woman. No, the word "transition" was not used, because, and here's the amazing thing, the movie is from 1975! This crazy stuff was brought up 46 years ago. Here's the guy, Leon, talking about it*:

Leon : I couldn't explain the things I did. So I went to this psychiatrist who told me that I was a woman trapped in a man's body. Well, so, right away Sonny wanted to get me money for a sex change operation: but where was he going to get that? 2,500 dollars. My God, he was in hock up to his ears already.

Twenty-five hundred dollas! I'm dyin' here, Sal. Haha, that was before the big inflation of the late 1970s through 1980.

The thing is, this scene wasn't at all important to the movie. It could have been left out, and the movie would have been just as good. It just made for a pretty weird interlude. I don't really think the makers of Dog Day Afternoon were particularly "woke", as you'd call it now. I just read information about the book (by Patrick Mann, never read it) here on Goodreads, and this bit is in the book too. Maybe he was the "woke" one. I don't know if the movie makers were trying to push some new thing, as part of an agenda, or to get more accolades maybe, or just be true to the book. Movies don't HAVE to do that though. Some don't even come close, and most viewers don't complain.

Anyway, I hadn't thought about that scene in years, as much as I recommend this movie to people. Dog Day Afternoon has got that one weird-ass scene, but the rest is what you'd expect from 1975 - no PC BS, yea! It's suspenseful, but something of a drama too, with quite a few bits of humor in it. I don't know if it was supposed to be humorous, but this scene at the beginning where robber # 3 just chickens out and goes home is funny to me. This scene will give you a taste of the movie:

MBlanc46
PS Two words: Christine Jorgensen.
Moderator
PS: Thanks, Mr. G. I did watch it on video, I think once in the '90s and once 10 years back or so. It's pretty good, and it has the same general theme - the system is corrupt, etc. This one is about the courts rather than the cops, as in Serpico.

You may recall the scene in the trailer: "I'm out of order?!! You're out of order, this whole trial is out of order!" or something like that.
Ganderson
PS
I never saw “And Justice For All”- the trailers looked to me like it was just Al Pacino overacting. It was directed by the Canadian director Norman Jewison, who, surprisingly, is not Jewish.

Moderator
PS: Mr. Ganderson, thank you for the low-down on the Al Pacino and Lumet "films". I've seen only Serpico of those you mention. Would you put "And Justice for All" in that category of old-left films? Is it a Lumet one too (yes, I know I can look it up, but, hey, you're retired)?

Yeah, that was old-fashioned leftism, called Liberalism already, but with a real Libertarian streak. (Seeing as how Liberal originally meant Libertarian long long ago, this makes sense.)

At college the student union had a film committee - we called them the movie committee to piss them off - and they would bring all the classic ones to the campus for a buck or even 50 cents sometimes. These people knew their stuff.

That's the kind of faux pas I would make, that of the guy in the Norwegian TV show - can't be too honest with women, and especially if there's no important point to it. Oh, and I'm glad you are in retirement, just for this reason.
Moderator
PS: Alarmist, yes I remember that great scene. As compared to the "Dog Day Afternoon scene", which was possibly made for something the audience could find humorous, though I don't know, the Monty Python one was definitely making fun of the whole concept.

Eric Idle, John Cleese, that guy who was hilarious in "A Fish Called Wanda", and then, who was the chick? Then, it moves on to the "People's Front of Judea" scene, oh, wait, was it the Popular Front? I didn't appreciate how funny that stuff was back in the day.
Moderator
PS: Robert, the 1st time I heard "woman trapped within a man's body" was from a guy in a county music band. No, wait it went "I feel like a lesbian trapped within a man's body", that was it, haha.

Whether it was the gay thing or that very rare case (I'd run into 2 over 30 years) of the guy you knew, as you wrote, it wasn't something we were FORCED to accept.

Because you brought up the pronoun avoidance, you reminded me of a small post for that March Mask Madness series I want to write - I just could NOT for the life of me figure out if this was a young man or woman, and because he/she was very nice, I felt bad, when I said at the end "see ya', man" automatically, cause I thought "oh, wait, my last guess was girl..."
Ganderson
PS Sidney Lumet was an old fashioned lefty- so he might have been on the wokester express today. His leftism is apparent in his movies- and he made a lot of them- 12 Angry Men, Serpico, Prince of the City, among MANY others. Prince of the City which is almost like an expanded version of Serpico, is surprisingly nuanced, more so than Serpico, and features Jerry Orbach as a corrupt, yet sympathetic cop. A proto-Lenny Brisco, one might say. (Although Brisco wasn’t corrupt- personality wise) Lumet was known, way before Scorcese, as a NYC director. He made a lot of good movies, and was part of that group of directors that remade American cinema in the late 60s to late 70’s. A great period for the silver screen, although I’m open to the notion that that evaluation is me remembering my youth, when I first seriously started watching “films”. I even had a subscription to Film Comment magazine. * ** I haven’t seen Dog Day Afternoon since it came out- I’ll have to watch it again. Another forgotten gem from around that time, 1973, (again, haven’t seen it since it came out) was Scarecrow, a road/buddy picture where Pacino is teamed with Gene Hackman.

Lumet was married to Gloria Vanderbilt in the late 50’s and early 60s, and was also married to Lena Horne’s daughter Gail Jones. PJ O’Rourke was married for a time to their daughter Amy Lumet

* My appreciation for foreign films (and I’ve told this story before) came about mostly due to a cunning plan to impress girls. I’d often come a cropper when a girl would ask, “Jules et Jim” is playing at the Film Society on Friday, wanna go?” Too often my answer was “Yeeah, love to, but the Gophers are playing Wisconsin that evening....”

** I watched a Norwegian TV show (Home for Christmas) this year, mostly for the language practice (and the lead was awfully cute): one of the scenes has our heroine going to see “Love, Actually” with a guy she just met in the library- it’s her favorite movie, and as they left the theater all the guy could do is talk about how much the damn thing sucked. His evening might have ended quite a bit more pleasantly (wink wink, nudge, nudge, say no more) had he just said “ Great movie! (Bra film!) That scene struck a chord with me.

BTW my retirement is bad news for all of y’all- more long posts!
The Alarmist
PS

Then there was Loretta in Monty Python’s Life of Brian.
Robert
PS: I will add that at that time, I knew someone who was "trapped in a man's body". If I remember right, he was (by his own lights) a heterosexual. Everyone treated him politely, figuring that he had enough problems in his life already. Pronouns were simply avoided in his presence; and his real name could fit either a man or woman, so that was not an issue.

They would have done the same if he said that he was a teacup, and most people thought it was about as sensible.

Probably a small slice of time and place, when you could be open about such things, but no-one else was expected to 'affirm' you. Tolerance vs. acceptance vs celebration. (And now rapidly approaching mandatory participation.)

Robert
PS: I saw that, when it was a second- (or probably third-) run movie. At the time, I figured that scene was to show what a bunch of losers they all were; and that they would, therefore, get caught at the end.

I will not say here if I was right, so do not take this as a spoiler. It is a really fun movie, if I remember rightly.