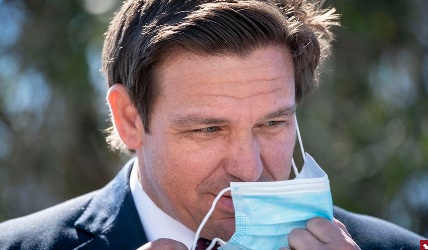 Though I've keep up somewhat with Florida's government's common-sense way of dealing with the dreaded Kung Flu, being almost completely off the Lyin' Press "news", I haven't kept up with all the details. Therefore, I haven't really known what a great character Governor Ron DeSantis is. Actually, because I don't watch video off the TV, I've never heard the man speak, so I can't say for sure he's an original "Florida Man".

It's been kind of new to me too, this humorous "Florida Man" meme, so just to explain, the idea is that if you hear some humorous story about some drunken and/or wild shenanigans on the news, the headline disproportionately reads "Florida Man". Peak Stupidity especially enjoyed the Florida man who used a front loader to dig up a few neighbors' yards in the process of removing Zhou Bai Dien signs late last October (he was ultimately unsuccessful ... in helping Trump win the election, that is). We have nothing against rednecks and this kind of fun here at Peak Stupidity.

As I dug up the image at the top (thinking about it for this previous post), I noted the headline for the post it came from: Gov. Ron DeSantis after Super Bowl criticism: 'How the hell can I drink a beer with a mask on?' The Governor was seen at the game with no mask on. That was bad cause, well, why again?

Now, Peak Stupidity gives the hypocrites grief on here all the time, as futile as it likely is. However, Governor DeSantis has been a trooper in fighting the idiocy of the Fed and their Kung Flu PanicFest. He has been against face mask mandates, so I am glad to see that he set a good example for Floridians.

Someone said, ‘hey, you were at the Super Bowl without a mask,’” the governor reportedly said. “But how the hell am I going to be able to drink a beer with a mask on? Come on. I had to watch the Bucs win.”

Mr. DeSantis, a Republican, is one of the few U.S. governors who never issued a mask mandate during the coronavirus pandemic. The NFL required masks at Sunday’s game and the crowd was reduced to less than 25,000 in a stadium that normally holds some 66,000 people.

Tampa Mayor Jane Castor had issued a largely voluntary executive order requiring masks during the Super Bowl festivities, the Orlando Sentinel reported. She faced questions Monday after viral photos and videos showed revelers in the streets without masks on.

Ms. Castor said it was a “little frustrating” that some fans didn’t follow the mask requirement but said the “majority of individuals” she saw celebrating complied. She also cited the Tampa Bay Lightning’s Stanley Cup win in September, which she said was not the superspreader event people had feared.

"Voluntary" executive order? What does "compliance" with a voluntary order mean? "Voluntary" means whoever wants to wear a face diaper at the game wears one, and whoever doesn't, doesn't. Aren't there any pot-holes to deal with, Mayor Castor? Yeah, and the only real superspreader I know is over near the Naval Observatory (where the VP hangs out).

I really hope the story of the conversation discussed in our post Federalism Rumble: DeSantis v Bai Dien is true. It was truly exhilarating to read that. The more I learn about Rob DeSantis, the more I like him. He doesn't kiss Fed ass, that's what it comes down to. How do you find guys like this, Florida? Every State could use more Florida men.

Moderator
PS: I didn't know that about him, Mr. Camper, but then, being a politician in Florida, well...
BigJimSportCamper
PS Nice that DeSantis is telling the Feds to stuff it re: covidiocy but it would be nicer if he wasn't such a bloddy damn Zionist. But then I suppose that's a prereq for US politicians.
Moderator
PS: Oh, and Alarmist, you brought up a good point. Just to comply with Dr. Fauci's wishes, I would like the Peak Stupidity commenters to please, please change face masks today. Alarmist, you change with Mr. Hail. Mr. Ganderson, change with Robert. Adam, you change with Dieter ( I KNOW he's in Germany, but just scan it into a .pdf, email it, and he can 3-D print it... hey, you're the TECH guy...)

Anyone else, just FLIP IT.
Moderator
PS: Thank you for the Florida stats site, Alarmist. I noted that there have been 9 deaths so far, NINE, of kids (under 18) so far in Florida. Even if we assume that ALL of them really died FROM the Covid-19, then that's an equal number to the average year's drownings of toddlers. Considering all the fences and other stuff parents do to stop that, there are still kids who drown in pools.

Oh, and the number went way up this years due to more people staying home.
The Alarmist
PS

I thought the blue side was the inside. Crap, have I been wearing my face-diaper wrong?

Re Super-spreader Bowl, check out the stats here (scroll down for the charts):