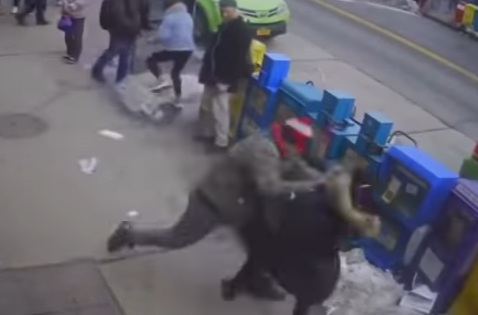 The race situation in this country is not getting any better. With the economy worsening for lots of reasons, with the divisive Kung Flu PanicFest going on, and with a Presidential administration that is blatantly anti-White, I think things will get worse. The main take-away I've seen is that no matter who bashes whom, it's the White People's fault.

Now, Mr. Steve Sailer has been doing a bang-up job recording the Lyin' Press' narrative on this for a long time. He's had a few posts lately on the topic, and it's Ring, Ring, go the Racists*, and, of course, the good comment thread below it, that I am keeping in mind here. I noticed that Peak Stupidity's 2nd-favorite-with-a-bullet pundit Michelle Malkin also has a good article regarding the same incident - Dear Woke Asians—Stop Blaming Whitey For Black-On-Asian Attacks. This and a related post to come will not be a rehash of Mr. Sailer's or Mrs. Malkin's illustrative takes on this inter-racial bashing the subsequent tweet-squabling, and the usual calls for the Community to get together to HATE on the White Man. I've got a couple of other points to make.

In particular, the case in question, with a video showing a white guy** knocking down an older Chinese lady, looks like a winner for the Lyin' Press narrative. They've got their Great White Defendant, in Tom Wolfe (The Bonfire of the Vanities parlance). However, in the iSteve comment section, way down there, a commenter replied to me with some more details. He stated that what was seen in the video happened after the (OK, 2nd) perpetrator got into a squabble about face masks with the old lady, she maced him, and THEN he knocked her on her ass. Now, that's a completely different story. It's from an internet commenter, while the duck didn't give me any results from "Flushing beating mace". Should I believe some internet commenter over the rest of the whole internet? Nowadays, yeah, I very well may.

Perhaps this commenter lives near there (Flushing, Queens, NY - hey, not a bad idea!) and actually knows some details. I don't plan to argue the truth of this case, which is, after all, just a small happening in a city in which I don't live near and has loads of cases of black violence against all kinds of people on a daily basis. This post will have a quick discussion about the plight of White people (sometimes Oriental too, or anyone who can't be held up on the pedestal as People of Color), when there is any conflict on the streets or other public places.

See we are 2nd-Class citizens at this point. All it takes is for a man to go through some scenario in his head, regarding what he'd do in certain situations, for him to realize where he stands with the law and public opiinion. Now a White man can go around avoiding trouble, highly recommended to anyone, and meekly taking some slight words of abuse and rude moves by others of higher races, and unless he is targeted directly as a crime victim, usually come out OK. Even being meek doesn't work all the time, as that encourages real bullies, as we learned around the time we were in kindergarten. Also, as men, it's not the way we'd all like to go through life.

Picture yourself in various scenarios that involve other races, especially black people. You can go through what you'd rather do the next time some black punk disses you or your girl or lady. You start with words back, but they are the most likely people to escalate things. You think of what you'll do then. I won't go through it all, but in my mind it never ends up worth it.

Back to that little incident in NY City, again, let's say you made a remark back about the face masks, due to someone giving you a hard time about not wearing one (see, here's where I come in!) What if the mace came out? That and pepper spray really suck to have in your face, or so I've learned from others (never had the pleasure myself). If it were the case, I imagine that guy in Flushing just got impulsive out of rage. Let's picture a more likely scenario, where you back way off from someone giving you grief about your face diaper, or lack thereof, or really, any other thing that he takes as a sleight. You back off and try to be reasonable. Then the 1st Class citizen escalates things by continuing to give you a hard time about it.

Yeah, you can just walk away. It looks like a wussie move to everyone, including yourself. However, you have to understand your status as a 2nd-Class citizen. If you decide to fight back, verbally or more seriously, you are at a big disadvantage. "Oh, we got video everywhere now", you say. Yeah, but it's often the case that any serious altercation will not be videoed from the beginning, the initial problem. I've seen the quick altercation mentioned above. I can't tell if there were words or mace sprayed, because nobody started "filming" yet then. Not only that, even if someone else did catch the rest of the story, as per our old late friend Paul Harvey, who says youtube or the TV news will show that one?

We already know that the way to both not have to put up with either getting railroaded by the law, HR, and maybe even one's wife, and not have to act like a meek 2nd-Class citizen is to simply avoid places where any of these people are around. It really is a shame, because when you get around the cities, even heavily black areas, you see that most people are just inherently pretty decent. Still, the percentage of people who can screw with you, or really, are ALLOWED to screw with you, is just too damn high.

You can get away from it pretty well (as per commenter Adam Smith) for now. How long will this be the case, though? Peak Stupidity will continue with this thought in a follow-up post called "Doing the Sticking Up for One's Self that White Americans just CAN'T Do." (or something close to that. I'd like to find better wording.)

* You'll have to click this one to understand the title, which is just a snarky aside regarding the woke writer of this particular article. Steve is at his funniest in this one, along with giving a good take on the story.

** He's got a Hispanic last name, but from the picture, he's at least one of those real white Hispanics.

Moderator
PS: That was a nice job, Alarmist. I assume this was quite a while ago. Importantly, this was before ubiquitous cameras. I know you were in the right anyway, but now you do't know what they (media, law enforcement) will make out of anything.

It's nice that most of us can carry guns if we want. In NYC that was never much of an option, but even if one could, brandishing quickly might help you some of the time, but were it to escalate, it's a big deal to go the whole Bernie Goetz. One wonders if he'd have been put in prison for life nowadays. I think so.
The Alarmist
PS

My third week into my time in NYC, a brutha accosted me for accidentally brushing against him getting out of the subway. I said “Sorry, man,” but he wasn’t going to let it go, so he followed me to the street and told me he was going to stomp my White ass with his combat boots. I was fresh “out of the war” so, feeling like I still had sufficient skills to handle him, I replied “I’m going to ram your combat boots so far up your black ass that yo mama is going to have to remove them from yo mouth” along with a crazy angry face that suggested I was up for it. Being in a one-to-one situation in a largely white neighbourhood, that was the end of the discussion. When I was accosted weeks later by a gang of bruthas wilding while I was running in Central Park, I decided to pick up the pace of my run. It’s all situational.