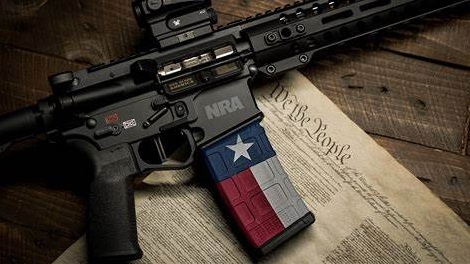 The National Rifle Association has been around for 150 years! Though they've compromised some, and they've got some kind of shenanigans going on at headquarters, I'm still a member. My main reason, besides getting the magazine* to spread around at airports and dentists' offices, is to just be a part of that 5,000,000 membership number. That huge number, for a private single-issue organization, has mattered in elections many times. I'm not sure it does anymore...

Well, New York State, with Attorney General Letitia James as attack dog, has just harassed the NRA enough to where they are bailing out of that state incorporation-wise. The organization had been based in Virginia, but they have been incorporated in New York State as a non-profit since their founding in 1871. But that was a different New York. The NRA's move to Texas is more of a financial and symbolic move than a physical one. To do this, they are using the usual business model of going bankrupt. There's discussion of the legal back-and-forth in that article. The gist of it is that New York State, or the politicians anyway, want the NRA dead, but Texas welcomes them.

How long Texas' support lasts depends on demographics, which are not trending well anywhere. I will give the NRA credit for understanding that as of late, based on some articles in the magazine.

I'm still a member, I got the magazine last month, and I have a new card: 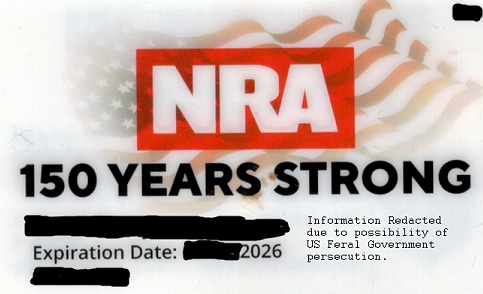 It's just a business move. What's the diff, and what took them so long? If you don't like the NRA, I suggest joining Gun Owners of America (the GOA). I used to read their website regularly when it was mainly the 2 Pratt brothers in charge. The site looks different now, but they are holding their own, I suppose, with 100,000 members per wiki. (I swear it used to be a lot higher though. Hopefully, that's just my memory.). I am not a member, but I may join any day now.

Is all this joining and spreading around magazines going to stave off the onslaught by the ctrl-left? No. After the CheatFest was accomplished, these people have got big heads. They are pretty sure they just have a mop-up operation on their hands. I believe they are mistaken in that, but I'll get to that.

The push is on now, full-bore. From what I've read - House Dem’s gun control bill mandates national registry, licensing, gov’t training and $800 insurance - there is no "compromise" talk anymore, of which "compromise" always meant small steps in the ctrl-left's favor, with spaces in between. They aren't going for the slippery slope anymore. They think they can ram this stuff down our throats.

Look at these people, though. The current-era hard left is composed of, how to say this politely, people with the brain power of high-functioning retards at best (luckily for us!) rather than the more intellectual but still wrong-headed people of the left of a century ago, It's not a big plan, so I won't say that they missed a step, exactly. They are just jumping the gun (pun unforeseen, but welcomed).

This push of registration of all guns, anathema to anyone who values liberty and has read the smallest bit of history, is already a bridge too far. The money in significant amounts will piss off the Fudds** too. Licensing and gov't training are just another hurdle and a security threat respectively.

Just the proposal and debate on this new bill ought to wake up a lot of Americans. They need the guns before they can have real honest control, like a Totalitarian government should. We no longer have to wonder about the slippery slope, small compromise, common-sense legislation, and "for the children" discussion, methods that are tempting to some. Anyone should know what they are up to now, as they are no longer trying to hide behind those weasel terms.

I don't care if people join the NRA or GOA due to this. I don't care if they write letters and emails or make phone calls. I don't see the value in all that, but knock yourselves out with that. It can't be all though. We must not comply. Anything other than that from an American liberty lover means he is a hypocrite.


Site Note: We've added 3 new topic keys lately to keep up. On this newest, Guns, well, no point clicking, as I haven't yet gone through (same for Zhou Bai Dien) and put the key on older posts yet. It's a chore. Right now, look in Liberty/Libertarianism, the one we've been using.

* It's pretty good read too, and my favorite part is the "Armed Citizen", now "Citizen Journal: Armed Citizen" column.

** I've nothing against hunters at all, some of whom get disparaged by this term "Elmer Fudds" by the serious liberty-minded gun enthusiasts. The problem has been that many bird hunters, for example, just care about shotguns for hunting, deer hunters don't care about pistols, etc. The term has been used for people who don't see the big picture of gun rights, that's all.

"Don't read about H.R. 127 the so called “Sabika Sheikh Firearm Licensing and Registration Act”. When I read it, it just pissed me off."

I don't think it has been "compromised" yet either. I really don't think this one has any traction. (I hope I'm not mistaken.) I think the gun grabbers feel like this is already a compromise bill as they'd prefer full confiscation, at least for White owned rifles.

I do see your point though. If this bill gains momentum and the spineless republicans reach a "compromise" and only parts of this horrible bill become "law", it will still be a loss of freedom and a loss of 2A "rights".

The useless republicans will break their arms patting themselves on the back at what a good job they did reaching across the aisle and reaching a consensus. Then they will tell us to "Turn in your rifles and pay $400 insurance for each handgun, if you pass the psych exam first." That sort of thing. Meanwhile, good luck buying ammo...

I hope Americans do a better job of resisting than did the Aussies.

☮
Moderator
PS: Mr. Smith, this bill was proposed by the black lefty Sheila Lee (I don't do middle names) as the “Sabika Sheikh Firearm Licensing and Registration Act". This one is HR 127, right? I don't know if it's been compromised on yet. That's something I meant to write in the post, in fact.

What happens usually is that the wildest most Totalitarian stuff gets proposed, and then it gets watered down to Totalitarianism light, and the right feels a "lot better about it". What I was going to write is that they'll go "oh, nobody can pay $800 yearly per gun. It'll just be 50 bucks. No psych tests for now, and this will be a database that only the BATF can see, I assure you, nobody else ..." etc.

So, of course I'm not happy with any bill. Whether people will resist, as opposed to Australians in the 1990s, I can't be sure. My point in this post though, is that this one seems like a whole lot at one time, perhaps a better thing in the long run. Well, that is, IF people do not comply. I know, Americans have been compliant to all the stupid shit that I often write about. We'll see. To me, if there were door-to-door confiscations, the thing that would most encourage complete ambushes of the enforcers and that sort of thing would not be so much "my rights" but promises that guys have made to themselves and others.
Adam Smith
PS: Good morning Mr. Moderator...

I tried to warn you about H.R. 127. This sort of assault on the 2nd amendment is blatantly unconstitutional, but that's never stopped them before. (I do remain optimistic that this cannot and will not pass at this time. I hope I'm correct.)

What you don't seem to understand is that H.R. 127 is a compromise bill. The statists on both sides of the aisle would love to see all out confiscation. They would love to send storm troopers to kick in our doors and take our guns and kill all the deplorables who dare not comply.

Witnessing how many people have complied with all out stupidity and evil for the last year I would not be surprised if most Americans meekly surrendered their guns and ammo the day Big Brother tells them to do so. You know, Aussie style.

Then "conservatives" will lecture us about how important and righteous it was to turn in our guns because we must follow the law, respect "government" authority, Romans 13, etc...

☮
Moderator
PS: I've seen that many times, Mr. Hail, when I google my site. That's about the only time I use google, just to help keep this site on top. Luckily the gamestop article did not push us off the top of the list.
Hail
PS

Off-topic but for your awareness:

"Peak Stupidity" has made the news...in a sense: