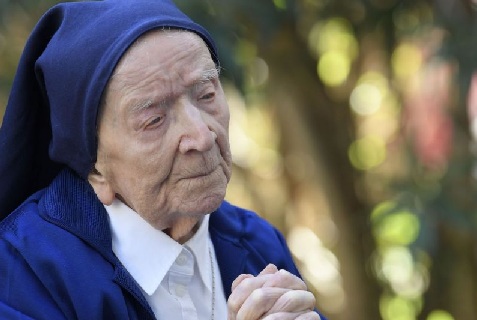 The Anchorage Daily News reported A French nun survived the Spanish flu and both world wars. Now she’s beaten COVID-19 days before she turns 117.* Sister André is said to be the 2nd oldest person in the world, screwed over by some old broad in Japan. She was born in 1904. She was teenager during the Spanish Flu Epidemic, so this Kung Flu is kid stuff to her:

When Sister André turned 115, Pope Francis sent her a personal letter and a blessed rosary, according to FAMVIN, a religious news service.

Even SPAM from the Commie so-called Pope Francis wasn't enough to phase this lady.

After her diagnosis with covid-19 in mid-January, Sister André was asymptomatic. Blind and in a wheelchair, the retired nun who lived through the 1918 flu pandemic and both world wars told France’s BFM TV that she wasn’t scared when she tested positive because she is not afraid to die.

Then there's this fuckin' guy:


Anthony Stephen Fauci, aka, Dr. Panic, of The US Feral Government: 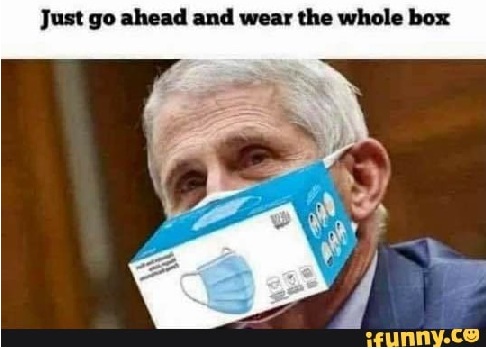 In this Panic/AntiPanic battle of Expert v Nun, Peak Stupidity picks The Nun in a technical knock-out.

* This site was not picked purely randomly. It took 10 minutes of duckduckgo browsing to find an article that didn't link to a news page that jumped around like a bunch of Mexican jumping beans for 5 minutes or one chock full of lefty crap.

Moderator
PS: Those are very good points about the lack of attention to preventative care and methods. I thought the whole mantra for the last 20 years or so was "wellcare", as opposed to sick care.

On this Kung Flu thing, nope, let's just all run away, run away...

Thanks for the great comments, all.
Mr. Anon
PS

"Blah, blah.. Anyway, apparently her heart had been fine, but after she "recovered from Covid19" she developed heart problems. Right. They showed her on the television and my thought was that her bodyweight of 360 pounds probably had more to do with her heart problems than the WuFlu did."

This was a common theme back in April when the news was reporting a whole bunch of cases of "young, healthy" people dying of COVID. You don't officially have heart disease or diabetes or anything else until a doctor writes in your chart "has heart disease or "has diabetes" or "has anything else". Of course you may actually have those co-morbidities, but until a doctor says you do, you are officially as healthy as a 22 year old olympic pentathalete. A 38 year old woman who weighs 360 pounds and has been carrying that weight around for a while probably does have a heart condition and has for a while, it's just that now, after getting diagnosed with COVID, she's also officially got heart disease.

The press doesn't report this because a.) they are lazy, b.) they are stupid, and c.) it interferes with the narrative they are pushing.
PeterIke
PS
@Ganderson "Peterike- i got the impression somehow that your are a Swede- or am I mistaken?"

I was watching the news, on one of the rare occasions when I do that to remind myself why I don't do that, and they were hyperventilating about how the WuFlu causes heart disease. Of course they had to do the, "Mary Smith is 38 years old and lives in Podunk. She went to the hospital with Covid..."

Blah, blah.. Anyway, apparently her heart had been fine, but after she "recovered from Covid19" she developed heart problems. Right. They showed her on the television and my thought was that her bodyweight of 360 pounds probably had more to do with her heart problems than the WuFlu did.
The Alarmist
PS

@Peterike asked, “Only masks and other physical signs of submission to the Hunger Games Capital. Why is that?”

Just wait until they insist on bagging us with hoods. The whole COVID circus reminds me of my Prisoner days during my SERE training, standing hooded (masked) in a cold solitary cell (really an armoire in size, but definitely social distancing), getting doused with cold water if I sat down or fell asleep or started singing along to the songs (My fave was “Napalm Sticks to Kids”) that they played over and over and over again to break you by keeping you awake, and when they dragged you off to interrogation, they made sure that the clocks in the different rooms were all set to differing times. They’d force into what they called stress positions (yoga with an attitude) to make you talk, but then promised you sweet release if you just give in to their reasonable requests.

I wonder what they use as a mnemonic for remembering the matrix of the Tap Code: In the old day it was, “Air Force Loves Queer Virgins.”

Mr. Anon, I do recall St. Anthony telling me that I was going to die of AIDS by 1990, although I don’t recall having done so. I think I’d have remembered...
Ganderson
PS.

What would be the US public health outcome of everyone (yours truly included) losing 20 pounds?

I realize not everyone needs to lose a quick 20, but I’ll guess the averages work out.

Peterike- i got the impression somehow that your are a Swede- or am I mistaken?
Mr. Anon
PS

Yes, I've never heard Fauci talk about things you can do to strengthen your immune system, like Vitamin D3, getting ouside and getting some fresh air and sunshine, exercise, eating better, taking zinc and quercetin (or even the dreaded hydroxychloroquine).
Peterike
PS

This whole covid thing surely is a puzzle, but maybe our immune systems have something — just a wee something — to do with it. Yet none of our Wise Leaders ever talk about immune systems. Only masks and other physical signs of submission to the Hunger Games Capital. Why is that?
MBlanc46
PS Your mileage may vary.