Tubmania and a cashless economy

She is not to be confused with another historical figure, Aunt Jemima. 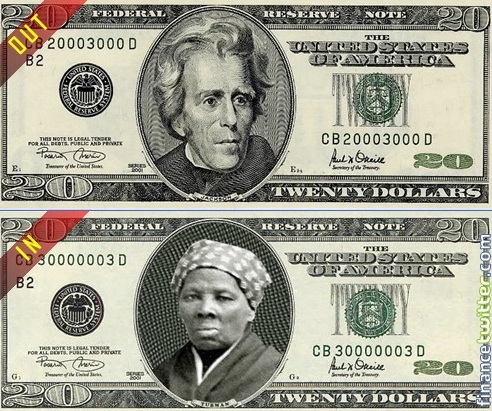 This post will go back to a philisophical discussion that has occurred on conservative comment sections all over the internet, including on this site, "are these people evil or stupid?" "Both" can be an answer too.

I have read that after President Trump's temporary nixing of the effort, the anti-White, anti-American, anti-history, PC enforcers will soon get this Tubwoman placed on the 20 dollar bill. It's interesting that when I read articles for more details, I never got anything telling me who exactly has the authority. It may indeed be just an Executive Branch function, held by the Secretary of the Treasury, but it seems like this symbolism on the currency of the realm should have been important throughout our American history.

What I did read is that the last time any changes to the persons pictured on the paper currency were made was back in 1929. Ex-President Grover Cleveland got the bad end of things, getting kicked off the twenty, but at least relegated to the thousand dollar bill (worth so much back the last time they were printed (1969) that he may not have been seen by many Americans on it). Alex Hamilton* was put on the ten, and Andy Jackson was moved from the ten to the twenty. Since then, the cosmetic changes in bills, such as the enlargement of the portraits that was done 10-15 yeras ago, were just not something anyone but collectors cared about.

This change is a big thing. It's anti-White hatred being rubbed in our face, this replacement of a very powerful and important American President, soldier and statesman by some Black History Month character. There's plenty of bad stuff involving redistribution of your wealth and income to black people on the docket of the Bai Dien/Harris crowd, all of it more important economically than this Tubwoman bit. However, this will be very soon rubbed in our faces directly, every time we buy something with cash or sell something with cash. I can see lots of White people seeing this currency for the first time in their hands and having thoughts such as "OK, that's about it. This is not my country. I need to take that scouting trip to Uruguay for real. This place is irredeemable!**"

The reason I brought up the stupid v evil question at the beginning of this post, is because I could imagine a devious plan here. The elites could be using this Tubwoman currency to take us to a cashless society in a hurry. Americans, with good reason, have been slow to go all cashless as some Euro countries are going and China*** has pretty much already gone completely. Peak Stupidity sees the evil in it, but all one has to do is to read two verses in Revelation - Chapter 13: 16-17. We have expounded on the mundane problems with going cashless, along with the evil due to the enablement of full government control in the posts Chipotle - no credit, no debit, and hold the E. Coli, Cash is King - (Part 2), and Cash is King - (Part 3) .

With the White people, still the people with most of the money, disgusted with the new currency, that could help accelerate the process. As usual, I don't see this as the devious conspiracy that it could be. I just see a lot of evil people that want to erase White history, and push this PC racial crap in our faces. It happens to align pretty good with that other goal too though, that other evil people are down with.

What will we end up doing about this indignity at the bank or check-out counter? What will you do about it? What will I do about it? I've got a lot to write about this one, with a few ideas. Some have been discussed a bit in the comments under the recent Amren article The Humiliation of the Harriet Tubman $20 by Scott Greer, so the reader may want to check that out before I get back on this subject tomorrow.

** in the words of pundit Paul Kersey.

*** See China roves Big Blother rong time for our information on Chinese society's having gone very near cashless in one decade.

Moderator
PS: Alarmist, don't the Bushes live in Paraguay rather than Uruaguay? Plus the guy in the Jimmy Buffett song, "Cowboy in the Jungle" also lives in Paraguay. Otherwise, you don't hear much about the place.
Cloudbuster
PS if these become a reality, I'll think I'll be calling them Aunt Jemima Twenties, or Jemimas for short.

I'll be using them though, because the cashless society will involve far more meaningful humiliations than an ugly negro on the twenty.
The Alarmist
PS

“You’ll need to take that scouting trip to Uruguay for real. This place is irredeemable!**"

The Bush clan have a lovely spread down there, along with a number of other criminal elits, so you’ll be in good company.

Meh, they can have the twety ... I’ll stick with the tenners with that other “black” guy, Alex Hamilton, who, BTW, spent a little time on $ 1K bills himself.

☮
MBlanc46
PS As bad as the profanation of the double sawbuck is, I fear that it’s only the beginning. George Floyd on the fiver, anyone?
ganderson
PS

I’m sure most of you know this story- but money and banking, specifically the Second Bank of the US was an issue in Jackson’s reelection campaign of 1832.

Jackson was a great hater, and two of the guys he really hated were Henry Clay of KY, and Nicholas Biddle, the president of the 2nd Bank of the US, both of whom wished to promote the expansion of the US using federal money, which needed a (more or less) federal bank to administer. As some of you may recall, Biddle’s descendent Sydney Biddle Barrows gained some notoriety in the early 80’s for…err… getting people together…

Anyway Jackson believed Clay’s American System (internal improvements funded by the tariff and administered by the 2nd BUS) was unconstitutional. He felt the Bank was illegal too, as there is no mention of a central bank in the document itself. (Clay argued, as Hamilton had before with the FIRST BUS, that since there was no prohibition of a bank….)

The Bank’s charter was set to expire in 1836- but Clay and Biddle introduced an early re-charter bill, knowing full well that Jackson would veto it, thus creating a groundswell of support for Clay in the presidential election of 1832. As the great Edmund Blackadder would say, “there was one tiny flaw in the plan- it was bollocks!!”

Jackson’s veto was tremendously popular, and Jax won reelection overwhelmingly. He then made war on the bank (the charter had 4 years left to run) and when 1836 rolled around the bank joined the choir invisible. One of the things Jax hated about the bank was paper money, which he felt was a confidence trick. I don’t think he’d have liked to be on any paper bill. How about Quannah Parker for the $20?

NB- Another reason Old Hickory hated the Bank was that many of the Bank’s stockholders were foreigners, English, mostly, and Andrew Jackson really hated the limeys.

Oh, and in Corona Panic news, good news and bad news- rather bad news but some good news out of some bad news:

The MN state legislature is considering a bill to make mask wearing, inside and outdoors a permanent feature of the landscape in the Land of 10,000 Lakes. The Land O' Lakes Indian chick could not be reached for comment.

And here in Western MA the attempt of the PTB at UMASS to lock down the student body has gotten, even here, masses of bad publicity.

Moderator
PS: "It is a little odd that Andrew Jackson is on a Federal Reserve Note..". Good point, Adam. I don't know if he'd have wanted it.
Adam Smith
PS: Good evening everyone...

It is a little odd that Andrew Jackson is on a Federal Reserve Note...

☮
Moderator
PS: "There is nothing new under the sun." Another book, Ecclesiastes, or The Byrds one, whichever came first.

They will indeed drag everyone down with incompetence (subject of an upcoming post), but they'll never ever understand that they did it, even when living like Haitians or Indiocratians.

Thanks for the comment, Mr. Pilgrim.
Billy Pilgrim
PS How about the Idiocracy money with the haulin' ass gettin' paid and party "dude" on there.
Make it in huge Weimar/Zimbabwe amounts, start at a $20,000 note and go from there.
The Zimbabwe money/wallpaper with the rock pile kind of looks like turds.
The Marxist Satanic curses are all about replacing what is good with an obscene grotesque mockery.
Diversity perversity over competence will be a biblical disaster of EPIC proportions and we are just getting started.
All of that stuff in the Bible?
It has all been done before because manboons is not a learning animal.There is nothing new under the sun.