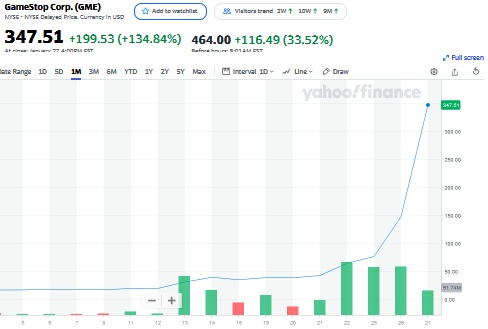 "The House always wins", they say. The odds favor the Casinos in the "gaming"* world of cards, craps, and one-armed bandits that don't even spit out coins anymore (and that was 10 years ago). They've got to earn a living, provide that free beer when you push that button on top of the nickel slot machine**, and pay off the politicians that work out the deal with gambling on the river. Fine.

In the gambling dang, gaming! world of the current stock market the big finance guys are The House, and they also plan on always winning. That's why this latest story about those internet penny-ante guys bidding up Gamestop (ticker GME, for those readers of our newsletter) to screw over the Big Finance short-sellers is unprecedented. Did no one think of this way to beat The House before?

This is by far the favorite news national story I've heard of in quite some time. This comment by commenter Talha under an Audacious Epigone post on this story has an image from Reddit with a very good explanation of shorting stocks and what happened in this case. By bidding up Gamestop stock up by something like 700% they cost The House, aka, the Big Finance guys, LOTS of money, as covering shorts can be very costly. It's a risky business, but then The House is used to arranging things so that the risk is minimal. Not this time! The House doesn't like to lose, though ...

The Big Finance guys are now out there on TV, apparently (I only read about it here and there) going on about REGULATION!! We must not allow people to game the system, dammit! How obviously hypocritical is this? Shoot, I wish I'd thought of this, but I'm not even a penny-ante guy. I don't like games of chance, hence I choose Chess over Trouble and Tetris over Solitaire.

Now, about Gamestop and video games, there was a store near us that closed more than 5 years ago. Yeah, can't people download it all from the "App Store"? Even I, a non-playing character in the market, would not have been buying up GME. Why are people in the market gambling and trying to beat The House to begin with?

That's an easy one. When the price of money, that is, interest rates, are forced down to values that don't even keep up with inflation, there aren't many choices when it comes to finding a place to store the value of one's labor. Inflation is not the low 1-2% that the BLS advertises. The loss of one's money to theft via inflation is significant. Because I had once believed this same thing, I think lots of people think that's all interest is supposed to cover, inflation. When one finally gets to thinking about the basic point of borrowing money, and the point of lending it, one gets to the concepts of the time value of money, and interest as the "price of money".

After more than a dozen years of the Federal Reserve forcing interest rates down in the basement, and housing purchases as investments being seen as not always a great move, the stock market is all that's left for people who want their money to "grow" (as in, at least be there in value for them in a few decades.)

So, ordinary people feel they have to gamble ("game"?) just to keep even. The House has to win though, and for every stock share bought, that's a stock share sold, a zero-sum game. The House doesn't want any more of this crazy losing shit, and they have already used Big-"TECH", that Robinhood site, to try to put the kibosh on future efforts to beat them like this.

Who knows, though? This Gamestop thing, nothing really about the video stores at all, but just the game, was very heartening. Maybe the penny-ante people will rise up and beat the living out of The House. That same Italian guy who's on all those mob movies explains:

* "Gambling" sounds too, I dunno, risky and addictive, so we say gaming now, meaning, like, gambling.

** Long ago, in Lost Wages, I was trying to show a friend how to push that button somewhere on the slot machine to get free beer (to even the odds), and I couldn't find it, so a rent-a-cop came over thinking we were somehow out to break into the machine, then figured out one of us was under the age to be in the joint, and kicked us out.

Moderator
PS: Dieter, layers of security around politicians have been added slowly since the free-wheeling days of the 1970s when John Hinkley walked up to within a foot of Jimmy Carter just to see if it would be feasible to shoot him. He shot Ronald Reagan, along with Jim Brady by accident, as he wanted to shoot a President to impress a lady. It didn't particularly matter which one. Not politics, strictly business, errr, insanity.

I could not view the video from your youtube link. (The YT page loaded, but the video was "unavailable".

Thanks for the comment again. Oh, and I read the book you recommended, "Our Lady of the Forest". I'll write a short review soon.
Dieter Kief
PS Hilarious twitter- thread by Ranz Paul

He has Tim Pool, the SPLC/Nobel Peace Prize nomination, David Portnoy, Leon Cooperman and - - - Joe Biden on video failing to put a pen into his jacket.
About Cooperman Ramz Paul comments: Warning: If you bought Game stop stock, you could soon be arrested for committing an anti-semitic hate-crime!

And he has just about the most ironic remark of today - ahh, of the whole week: A comparison of the protection of the Capitol and - Adolf Hitler, walking around with little protection in Vienna and - Paris...

Hedge-fund Big Man Leon Cooperman complains about the reddit-investors: "It's an attack on rich people, and government should not allow this. It's illegal." - Hoho.
About Cooperman Ramz Paul comments: Warning: If you bought Game Stop stock, "you could soon be arrested for committing an anti-Semitic hate-crime."

https://www.youtube.com/watch?v=drOLqPlVA_c&list=PLBvqbYh1QjTStMmURpUqp5XRaOWuh05bV
Moderator
PS: There may be, Mr. Blanc, but likely nothing the big guys don't know about or even violated all day long themselves.

I guess jail would still be better than the Joe Pesci treatment (either way).
MBlanc46
PS Mme B, who’s the financial wizard in the Blanc household, claims that there are probably laws against the sort of market manipulation that the Reddit guys pulled off. Therefore, don’t be surprised if some folks go to jail.