The Farewell to Kings didn't take

I just cannot walk by a working TV set these days, even for 5 seconds, without coming up with a blog post. This time, it was the Lyin' Press Infotainment with a story about Joe Biden's being rude or aggressive to someone, I guess a reporter, pundit, or maybe politician. 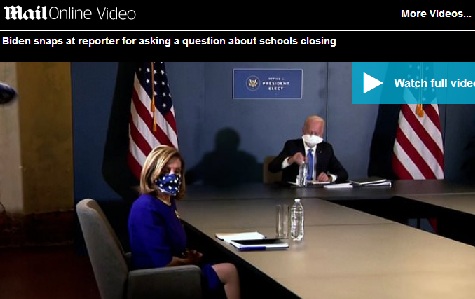 The video this screenshot came from was about an incident back in late November '20.

"What's the problem?", the reader may ask. It's amazing that the Lyin' Press is saying something bad at all about this President, knowing that they are nothing but another branch of the Feral Gov't, and we know where it stands. Yes, Peak Stupidity could write bad things about Zhou Bai Dien for months itself, but we don't want to bore the readers or cause a Peak Stupidity staff suicide of some sort.

I also have noticed Joe Biden's aggressiveness. That time he got in the face of a factory worker (in Ohio, I believe) who politely asked the candidate a question got me wondering how much seniority the guy had. Were it me with less than 15 years in, I'd have been likely to have just took a quick swing at the guy's face. Yeah, Mr. Biden could use to spend some time in an Anger Management class.

Again, what's my problem? Here's the problem: I miss the old American Republic, or what was left of it in my younger days, where the President did his thing, and only the National Enquirer cared about these little personal stories. The President is supposed to be Administrator of the Executive Branch. Congress did the lawmaking, the courts didn't do so much of it, and the President could push an agenda verbally with that "bully pulpit". However, I don't recall it was all about Executive Orders so much back in the day.

We posted I'd thought we'd bid Farewell to Kings a couple of years back (yes, of course we included a Rush song). That post was about flags being lowered to half-mast for G.H.W. Bush dying, which was just too much obsequiousness for this guy. Now, it's constant reporting on every little detail, that just evokes thoughts of the USSR or North Korea. "Oh, our Dear Leader sneezed. What does that mean for our future?" "So and so visited the White House yesterday. How will that affect policy?" "He's wearing a red tie today. What's that mean?"

It could be partly that the 24/7/365-6 Infotainment must fill up all that air time. It's also the huge amount of power the President is let to wield these days, should he see fit (Biden, lots of it, Trump, not so much). I long for the days of Calvin Coolidge. "The President hasn't been heard from for 2 1/2 weeks." "Good!" America's Founders bid Farewell to Kings, but it seems the belief in Kings has come back to America.

The constant harassment of President Trump was for other reasons, but even this negative "story" about Joe Biden's personality quirks turns me off as just too Soviet or North Korean for my tastes. We need to know what kind of horror is in the new legislation coming down the pike and the names of all the assholes voting for it. That'd be news I can use.

By-Tor and the Snow Dog
PS Comrade Kommissar Biden moved quickly regarding the ROCAF overflights of Taiwan.
He is a fierce Sun Tzu Von Clausewitz warmaster and will lead us to glorious victories. (hee har!)
I'm not feeling the unity out there among the unwashed masses.
A little bit of snow (4-5inches) caused a panic buying extravaganza with the toilet paper aisle completely gone and a line at the dollar store almost to the refrigeration section.
The replacements can't drive in the snow and go two miles an hour which is more dangerous than the road conditions.
It is up to almost 45 executive orders in just over a week as part of the Build It Back Bitter or third term of fundamental transformation.
Moderator
PS: I like Jordan Peterson, Mr. Kief. He gets out of his league on some things, but he's at least an academic who will fight the left.

Mr. Alarmist, I saw Mr. Biden strike back with another "exaggeration" of his, but at least he was smiling and bullshitting on this one. I wouldn't have seen a reason to want to strike him. I put some other video of ~30 year-ago Biden on the site, and it was amazing to see TV media not being so one-sided. Many people probably don't remember that time.

Mr. Ganderson, I can still remember the plagiarism story (the big one regarding a speech) from about that time. I thought "well, at least this guy is done." Nope they come back, because even the middle aged have CRS disease when it comes to politics - Can't Remember Shit.
Ganderson
PS . Almost everything he said in that clip is false. What a tool.

The difference between Trump and Biden- if one spent some time with Trump- say, you were paired up with him on the golf course , you might come away with the idea “ he was kind of a dick, but I kinda liked him”. With Biden it would be “ what a fucking douchebag”.

I had a friend, sadly now passed away, who was a Delaware River pilot. He lived in Lewes, DE, and told me back in the late 80s ( when I was just beginning the transition from commie to right wing bastard) what a POS Biden was. He must be spinning in his grave.
Adam Smith
PS: Good morning everyone...

It's nice that Dear Leaders hair grew back.

One of the things about being older is remembering that the Dear Leader has quite a history of aggressiveness...


https://youtu.be/D1j0FS0Z6ho
Dieter Kief
PS - Infotainment as (one more) means of collective regression. That is postmodernity (amongst other things) - : - feels over principles/deeds.
The guy who wrapped this up in three words is popular with his own report now and even a popular internet plattform (locals) and a greater mind he supports at times (Jordan B. Peterson - prominent postmodernism critic!). Ok, guy's name: Dave Rubin. His three golden words: "The regresssive left" (as opposed to the "progressive left" of "The Days of Old, When We Dug Up the Gold...").