Kung Flu, or just the Flu? 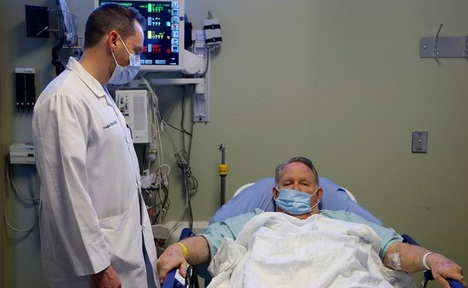 On the first day of this year, commenter Mr. Anon noted under the Peak Stupidity post Prognosis Positive that's it's been a really quiet flu season. I mean really quiet, just too freakin' quiet to be believable. All we anti-panickers have wondered about which types of deaths were being marked down by coroners or doctors as being FROM the Covid-19, rather than a death of someone WITH the virus, or, for that matter, WITHOUT some times too. There are plenty of incentives to do so.

Now, when we hear of or read about the "excess death" count, as Steve Sailer wrote about (with a slew of 10 graphs from some guy), it's easy to get baffled by all that excess. After all, if more people are dying, period, than what IS the deal. We noted in the comments that these baselines (or base curves, actually) that are being subtracted out to determine these excess deaths are, shall we say, "unsound". Are the actual general rises in deaths of a rapidly aging American population being taken into account?

Even if that base curve represented some "normal" year of people dying, can't there be significant rises in other deaths of any sorts that should be subtracted off of these large supposed Kung Flu deaths? With the LOCKDOWNS having (purposefully) caused an economic depression, there must be higher levels of some types of deaths - (suicides, for example) along with lower levels of others (traffic accidents, for example).

Let's just look at the flu though, or to speak technically, the influenza. The wonderful CDC itself, as reported by the United Press Int'l, says about the current flu season (defined as a period centered on the wintertime) Flu continues to have 'low' impact as COVID-19 pandemic rages. In the words of a different Satan, not in the employee of the US Feral Gov't, How convenient!

Our good friends, by this point, at the Statista.com site show the death counts for 10 of the most recent flu years on this page: 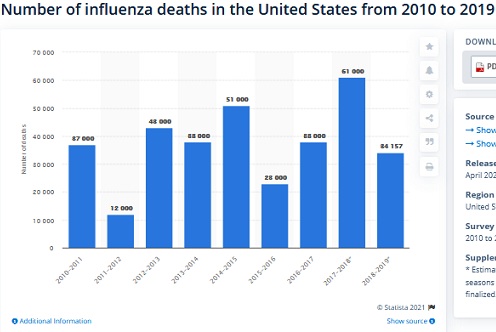 An average year over that decade had 35,000 to 40,000 deaths from influenza. Here's a table from a wiki page with the same data along with the number of hospitalizations: 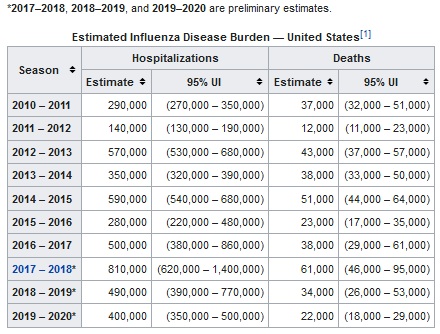 Only 136 people across the country have been hospitalized with the flu so far this winter. No flu-related deaths have been reported, the agency said.

By this time last winter, more than 15 million people in the United States had been sickened with the influenza virus, with 140,000 requiring hospitalization as a result, the CDC estimated.

Now, that's a little far-fetched, don't you think? Oh, but it's because we have been diligent in wearing our masks and keeping our 6 ft. distances, the short UPI article says.. That's not reality, though, and why do those Kung Flu filled droplets still hit their marks, while the influenza filled droplets don't? Is the former really that much more contagious? We've been told different stories on that, often from the same people.

This last wiki table has 10 years worth of Flu-symptomatic Illnesses and medical visits due to flu. Man, those are big numbers. What happens to those people that get sent to the hospital for the flu this season? Well, they get tested for the COVID-19 antibodies, and, if positive, whatever problems they've got will be chalked up to the Kung Flu rather than the "normal" flu. Peak Stupidity has already noted the big incentives, both monetary and political, in place to encourage this to happen. 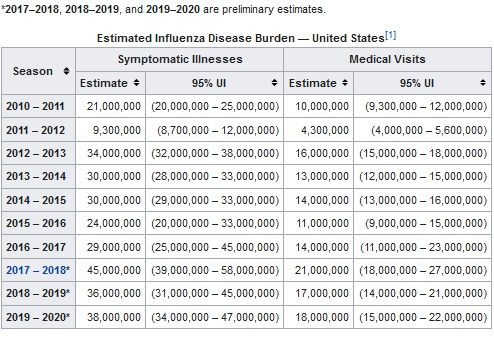 OK, with 425,000 supposed total Kung Flu deaths in this country as of today, an average flu season would be 8-9% of that. Is it no big factor? Yeah, how do we know this wouldn't have been a killer flu year, if we'd been logging them? What happens when patients with these typically elderly patients with normal flu symptoms get sent to the hospital? They are getting more crowded now. The patient cannot have visits with his loved ones, and bad things happen at the hospital. I think the sorrow alone can kill a lot of the elderly, and there's plenty of sorrow to go around now.

I'm beginning to think the overlords are just trying to humiliate the proles or something.

Welcome to Costco I Love You... ☺
Idiocracy is my favorite documentary.

As you may know, on November 22, the Johns Hopkins News Letter published an article about a "webinar" titled "Covid-19 Deaths: A Look at U.S. Data" that you can watch at the link above. Genevieve Briand studied CDC data and noticed, "the total decrease in deaths by other causes almost exactly equals the increase in deaths by COVID-19”. The article was retracted (kinda) 4 days later because it "minimized the impact of the pandemic." Briand’s work was rejected because it challenged the official narrative™. You can still find the retracted article about what she found in the cdc data here...

Braind believes that deaths due to heart diseases, respiratory diseases, influenza and pneumonia are being recategorized as the most sinister of viruses. With all the incentives to goose the numbers, I am not surprised by this finding.

"Only 136 people across the country have been hospitalized with the flu so far this winter."

That's only 139,864 fewer flu hospitalizations than last year. That's not suspicious at all.

$417 large, I believe ... more than POTUS. All of this excludes their external income sources, which both of them have no shortage of. In fact, both are poster boys for conflicts of interest.

The truth comes out in the Deaths From All Causes stats, which for 2020 look somewhat elevated in a number of countries, but before calling those excess deaths, someone needs to adjust for the growth and aging of populations as well as working out how much of any actual excess death was merely mortality displacement (culling of the weakest earlier) and by how much.
Moderator
PS: Please paste some links into a comment, Mr. Idiocracy fan, on the Dr. Fauqi ties to the CCP. BTW, Ron Paul (in the video in the next post) says the guy makes 400 large per year. Not bad for a doctor that doesn't even have any patients.
Welcome to Costco I Love You
PS Just read about comrade kommissar Dr. Fraudski having all kinds of ties to CCP and the Wuhan (racist!) lab.
It was on some big teevee news channel.
He said Trump would be tested by a pandemic several years ago.
Since he is the highest paid member of the best government that money can buy, he can afford a crystal ball.
Some elders got the jab and they are not feeling well after a week.
When it goes mandatory what will happen to my body my choice?