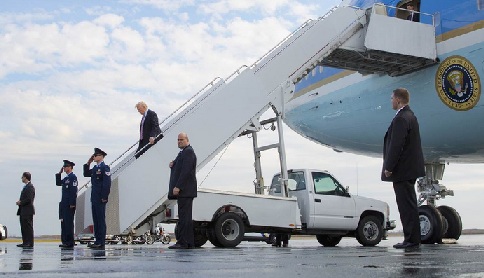 That's it. We knew we couldn't expect this guy to make it all better for us, but most of us expected a lot more help out of him than we got. The reader will find plenty of posts of disparagement, discouragement, disappointment, and distain for the (mostly) words, actions and lack thereof from President Trump. He will also find a number of posts with hope and encouragement. The former are likely more in number than the latter, as this guy was a really big failure compared to what he could have been.

John Derbyshire lays it out pretty well too, in his recent column The World of Null-T—Next Time, We Need A Cadre Who Know Their Way Around*. "Failure" is the word he uses too. There's no hope here for "yeah, wait for the midterms!" or "2024!" The hope we have is based on those of us, in the dozens of millions, who put some hope in Donald Trump but realize now that things can't be fixed by one man anyway. More realize now that the GOP is just one of 2 major squads of The Party, and The Party is not on our side, and, no, "we ain't in it."

It would have been nice for Donald Trump to at least done a few decent gestures and said a few good words for his supporters at the end. Nope, instead of pardoning some Conservatives or the Deep-State nemisae(?) Ed Snowden* and Julian Assange, he pardoned some assistant to an Israeli spy and some black dudes for I don't care what. And, nope, instead of at least saying words to minimize and fight the BS infotainment barrage about that "insurrection", and giving a little support to the Capitol Gang, he just left us with some more about HIM, HIM, HIM. Hey, man, we don't care anymore. This wasn't all about YOU! We just thought you'd be a good help for our cause.

Mr. Anon
PS "BTW, has Durham released his findings yet!"

I think he will soon - and they will blow the lid off official Washington.

His conclusions: - brace yourself - The Maine was sunk by those dastardly Spaniards!
The Alarmist
PS

The problem with using a TV personality as the figurehead of the revolution is that they typically aren’t well versed in the legwork of actual production. They read the teleprompter and put in the necessary appearances, but they need a talented team putting all the pieces in place for the on-screen talent to hit his marks and cues p.. From day one, Mr. Trump used someone elses’ production crew and writing teams to script how the revolution was going to unfold, and since they were the same vested interests who ran the swamp, why should we be surprised that the revolution was DOA?

BTW, has Durham released his findings yet!
MBlanc46
PS We weren’t wrong to have expected more, but we shouldn’t be surprised that we got less. A lot less. He gave us four years to get prepared for complete, permanent control of the federal government by the Left. It doesn’t seem to me that we used that time very well. Now we’ll have to make those preparations whilst we’re being hunted down like vermin. So, what do we do now?
Moderator
PS: On the grammar, I'll leave in "nemesae" because Mr. Smith likes it, but yes, I was wrong about "cadre". In my reading of modern Chinese history, I know I've seen it used as singular, as in "a Party cadre", but from looking up the definition just now, you are quite right, Mr. New U. I also should have figured that Mr. Derbyshire wouldn't have made a mistake, with his impeccable grammar and spelling. (Pretty good, with his having come from a foreign country and all...) ;-}

Also, I should have read his column again to see his context. He does mean multiple political operators.

Anyway, it's been corrected. Thank you.
Moderator
PS: Mr. Smith, thanks for the details on some of these people who got that pardon LUV from President Trump at the end there. Maybe these people were picked in order to pay forward favors that will help him, Trump, be safe during his ex-President years. The rest of us ... ya fiyad.

Moderator
PS: Thanks for the comment BBM, and I especially like "We are going to need a bigger bicycle horn"!
Grammar? I hardly know her!
PS Cadre is a mass noun referring to a group of people, as such, 'their' is the correct pronoun.
Adam Smith
PS: Good evening Mr. Moderator...

The bullshitter should have pardoned the capitol protesters, Assange, Snowden, Manning and other whistleblowers. Instead he pardoned Charles Kushner, Jonathon Braun, Eliyahu Weinstein and Sholam Weiss. Eli Weinstein was convicted of defrauding real estate investors out of $200 million. Sholom Weiss helped investors with National Heritage Life Insurance Company defraud the company and policyholders of more than $125 million.

While I do think cannabis should be completely legal, Jonathon Braun was into more than just importing weed. Federal agents arrested Braun in 2010, when he was 27 years old, accusing him of heading an operation that illegally imported more than 110 tons of pot over 3 years.

How does someone in their 20's import almost 2 billion dollars worth of cannabis? Who is this guy really working for?

Braun moved about $6 million a week, and laundered about $14 million dollars in cash each week. He plead guilty in 2011 but wasn't sentenced until 2019. While Braun was waiting to be sentenced, Braun got involved in the merchant cash advance business, a loosely regulated loan shark business operated by shady Jews from New York and New Jersey. Bloomberg reported how Braun’s business, Richmond Capital, charged interest rates of over 400% per year. Jon Braun has a bad temper and is extremely violent. According to the New York Times, "Mr. Braun’s family had told people it was willing to spend millions of dollars for lawyers and others to try to get him out of prison."

☮
The Blue Meanie
PS He (Trump) did buy us some time. Using it wisely was up to the individual.
The controlled demolition of the former USA is priority one of das Üniparty and they aren't taking an opinion poll or asking for a vote on the matter.
The CPUSA owns the big steaming pile of FAIL that is coming.
Just read about New Mexico energy jobs getting gutted by Our Dear Papa Joe (ABC News depiction), the Keystone Pipeline cancel costs thousands of union jobs but the nomenklatura comrades do feel the pain of the proles from their luxury dachas.
This just is from repurposed Mittens Czar Comrade Kommissar Barnie Sandlers-workers of the world unite...and sing glorious Soviet songs in the spirit of unity.
Prescription drugs prices are going up on order from Big Pharma, too bad so sad muh medical is a right voters.
We are going to need a bigger bicycle horn for the coming golden age of comedy.