Anarcho-Tyranny and the murder of Ashli Babbitt 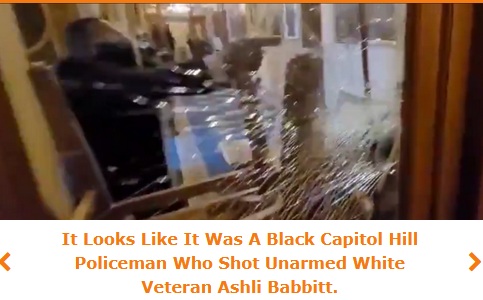 The above graphic is from VDare, but I've seen videos too. Ashli Babbitt was shot from just what sure looks like 8 ft away or less. She was on the other side of a door with a partly bashed-in window, trying to find a way in. She was of absolutely no imminent threat to this cop who shot here in the neck, and would have been no threat even if she were right next to him.

Yet, the Lyin' Press will treat her as the villain to go along with their narrative that the events at the Capitol on Jan 6th were part of an insurrection. As commenter Mr. Anon put it, "Right, a bunch of guys who all own guns break into the Capitol without their guns, and that's an 'insurrection'? Sure, they staged an "unarmed insurrection". Perhaps, history's first."

I doubt that cop will lose a day of pay, much less get fired, and much less get deserved jail time for at VERY LEAST manslaughter. After all, he was putting down an insurrection against the revered legislative branch of the US Government, so he is possibly a hero. Hey, they are barraging people with the big lies so heavy that they may as well go with "hero".

Is it just me or has the entire universe of establishment media, politics and Hollywood forgotten that this country has endured an entire year of relentless violent anarchotyranny?

With all respect to, and admiration for, this brave pundit and activist for the right, I would like to answer the question:

There's been no forgetting. Anarcho-Tyranny has been working well for them. We all can see it in the treatment of these slightly-over-exuberant-at-worst Capitol Gang, as the BLM and antifa have destroyed private businesses and beat and killed people in cities all over the country last year. Michelle Malkin gets that. What she doesn't get is that this Lyin' Press effort itself is part of the Anarcho-Tyranny. Why can't the press get in on this too? The treating of this small single protest of the right as an insurrection not seen since the French Revolution, causing the need for a new, domestic version of the Patriot Act, while the BLM "peaceful protests" are treated as pleas for fairness and more taxpayers cash IS the Anarcho-Tyranny here.

It's Anarcho-Tyranny all the way down. What of the murdered Ashli Babbitt? Speaking of heroes (earlier), is she a hero? No, Peak Stupidity is pretty tight with our definition of "hero" - see First Responders and Heroes. She is a victim of the evil system we live under in which conservative white people are on the T end of the Anarcho-Tyranny. We all know the fuss that would be on the Infotainment for months had a white cop shot an unarmed, unthreatening black lady trespassing in the "people's house" to demand Social Justice.

If White people got their act together, the late Mrs. Ashli Babbitt could be a martyr for the cause. To some degree, there are already millions, men especially, kept out of careers they could have thrived in, kept out of universities, screwed in courts, and vilified in the media. The martyring of Ashli Babbitt is just more visible and complete. Don't let the Lyin' Press Anarcho-Tyranny make you think otherwise. 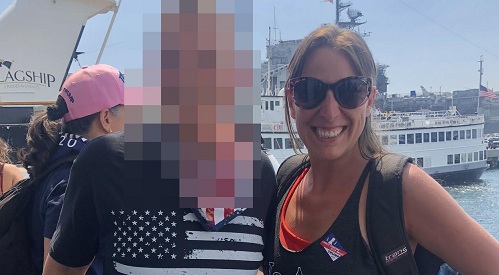 Robert
PS: Mr. Anderson, By the mid seventies, although I was still a young 'un, I had read 'Witness' by Whittaker Chambers, at my Father's reccomendation, as a good book both politically and spiritually. It was probably the only copy in our zip code outside the library.

We also had a neighbour 'Commie Curtis' who had a weekly paper 'The Haymarket'.

So, these names were familiar to me from highly differing perspectives.

Fun times.
Ganderson
PS- someday I'll do a post free of typos....
ganderson
PS When I was in college (mid 1970's) the received wisdom was that Alger Hiss was railroaded by the likes of McCarthy, Nixon and Whittaker Chambers, and that the Rosenbergs were only sharing info with Stalin in order to better fight fascism. Oh and Emma Goldman was a feminist hero.

The Hiss thing began to change with the publication of Allen Weinstein's book "Perjury". in the late 1970's- Weinstein set out to write the definitive history of the Hiss case- like most academic historians he believed Hiss was framed, but the time he finished his research he concluded that one could come to no there conclusion other than that hiss had been a Soviet agent. And this was 15 or so years before Hiss' guilt was confirmed by the release of the Venona papers. Bard College still has an endowed professorship named after Hiss. Wonder if there are any southern schools that have chairs named after Robert E. Lee, or Nathan Bedford Forrest?
The Rosenbergs' defenders are now basically "well, they shouldn't have executed Ethyl"- that's probably right, but doesn't cause me to lose any sleep. Julius was offered her life for the rest of the gang- he preferred she face "old sparky."
Robert
PS: Mr. Moderator, Mr. Smith, I should have known better.

P.S. Emma Goldman, for all her faults (which were legion), at least had the honesty to be a proper anarchist who decided that communism was not good, and left Russia. For some reason England and Canada let her in.
Adam Smith
PS: Good afternoon Robert...

"...that was a failed attempt at sarcasm."

I don't think you failed at all.
I rather liked your joke.

☮
Moderator
PS: I got that sarcasm, Robert. I was just commenting that "send 'em to Russia" (were "em" me) doesn't strike the fear in me that it would have in 1985. It might be a welcome change nowadays. (Worked for Ed Snowden)
Robert
PS: Mr Moderator, actually, that was a failed attempt at sarcasm.

When I was a kid, Emma Goldman, Alger Hiss, and the Rosenbergs were somehow mixed up with each other, as examples of people who were not real Americans. Rather real Anti-Americans.

Ashli Babbitt certainly looked (and acted) like a real American. Emma Goldman looked (and acted) like a real Anti-American.
Trotsky's Icepick
PS Patriot pages have his identity and BLM social media archive where he brags about shooting Trump supporters.
He was also on the security detail where Rep. Steve Scalise was almost killed while playing softball.
Maybe Ashli was egged on by agitators and caught up in the crowd frenzy?
Did you see the Zoom chat where low level fedgov workers recorded their plans to sabotage Trump at every turn?
They fight hard for the comrades crushing the capitalist pigs from their cush six figure gig.
The feel the pain of the working man with their trust funds.
Moderator
PS: I couldn't agree more, Mr. Blanc and Mr. Smith.

Adam, you are right about the trouble I'd be in. As a single guy, I would still be glad I went.

Robert, I can see myself in the jail now: "Please don't throw me in the briar patch, errr, send me to Russia!" What a turnaround 35 years makes!

Robert
PS: She sure looks just like another Emma Goldman to me. They should deport her to Russia.

Oh, ... wait. Too late for that now.
Adam Smith
PS: Good afternoon everyone...

The cop who murdered Ashli is currently enjoying his paid vacation. I will be surprised if he isn't awarded a congressional medal for bravely saving Our Glorious Democracy™. It's a good thing he didn't kill a precious Black! body. That would have been problematic.

Mr. Blanc, it's pretty amazing how Blacks! burning down cities are peaceful protesters but whites protesting a fraudulent election are terrorists. It's almost like the overlords are trying to start a civil war or something.

Mr. Moderator, it's probably a good thing you didn't make it to the capitol protest like you wanted to. They are zealously hunting down people who attended. You might have ended up in the clink with Mr. Buffalo Horns.

"Those insurrectionists were not patriots. They were not part of a political base to be catered to and managed. They were domestic terrorists. And justice must prevail!" - Nancy Pelosi

☮
MBlanc46
PS It should be clear now to everyone who pays attention that this is the way things are now. Thousands of them across the country riot, loot, and burn, for months, and it’s “mostly peaceful protest”. A few hundreds of us, out of hundreds of thousands, illegally (apparently) enter the US Capitol and it’s an “insurrection” an assault on “our democracy”. The rioters, looters, and burners mostly get off scott-free, while our guys face years in prison. They are not going to play fair. Fairness is over. We can’t solve this by voting. They can steal any election that really counts. The historic American republic is finished. It remains to be seen how much of Western civilization in North America can be saved. Much of the answer to that question depends on how much much of this those who aren’t paying close attention are able to process.