How close to danger? 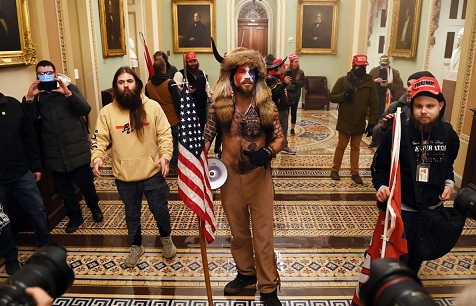 "How close to danger ...", as the start of a question, was what I heard passing by a TV with CNN on this afternoon. I didn't stick around long, but I heard enough in the background to know that this Capitol Gang story must still be in the forefront of the media barrage. It's been over a week now since this small effort to fight back against the powerful leftwing forces that run almost everything in this country.

As with the 3 year-long Russia Collusion, because I don't participate in Lyin' Press stupidity, sometimes I am quite surprised that some story is still going on (see Nothing but Distractions). Peak Stupidity was pretty excited, in a good way, to see what went on a week ago Wednesday.

Is this story still on the news because 4 or 5 deaths, 3 of them, maybe even 4, deaths from natural causes that the odds may favor during a stressful event attended by some older folks? By the end of this past summer, some death during one of the riots in Minneapolis, Portland, etc. wouldn't have even been on the news. There were many. It's surely not that a black cop shot a white woman who was no threat to him in the neck from 8 ft away, is it? That ought to be a big part of the story here, as she was the only one murdered during the event.

Let me go back to that one line I heard clearly. I don't know how stupid these talking heads and their associates on CNN really are. I find it hard to believe that they think that the Congressmen and Senators were in real danger there. We've all seen plenty of video, and they've seen plenty of video. This was not a crowd out to purposefully harm anyone. Therefore, the news lady was either very, very stupid, or putting out one big fat lie by implication. "OMG, luckily our priceless, irreplaceable leaders were just far enough to avoid being beaten to death by the crowd of middle-aged fun-loving MAGA people!" was the implication. (I heard something about "100 ft" in there.) The implication is that common Americans have no business being anywhere near these important "leaders", much less in the same room, without being invited.

The man with the horned hat should have made a proper appointment, on his knees, to his Congressman's secretary, and taken his hat off before entering the house of our dear leaders. Something about this reminds me of The 500 Hats of Bartholomew Cubbins.

PS: I have a number of more posts coming on this "insurrection" (insurrection, ha, we wish!) There are so many posts built up, but there's been not so much time lately. Thank you all for reading.

You may be right, but there are so many punchable faces in America these days.

☮
Adam Smith
PS: Brawndo, It's got what plants crave.
It's got electrolytes. Water is for toilets.

I can perfectly imagine the reaction of your dinner companion at the news of your son becoming Catholic. As you say, if you had told her instead that he were "transitioning"*, she would have said that was very "brave" and that you undoubtedly must be proud.

By the way, good for you and your son in returning to the fold. I'm not Catholic, but I think it's a pretty good Church (aside from the leftism emanating from the Vatican).

The only thing missing from Mr. Biden’s post-insurrection speech was the “Mission Accomplishec” banner. He also missed a great gag by not borrowing the “stolen” Speaker’s podium. I guess they’re disappointed they can’t do a literal “I’m Spartacus” mass crucifiction on Pennsylvania Ave. and will instead have to settle for mass deplatforming.
ganderson
PS.

Jake Tapper has the most punchable face in America.

The sentiments on display at places like CNN are commonplaces in my little college town corner of the universe.

An example-back in the PT (pre-Trump ) era we were out to dinner with a professor at one of the local colleges-the one my wife works at. We were pleasantly chatting about the various things our grown up kids were doing and we happened to mention that our eldest, who had attended a well know midwest Catholic university (not THE most famous one), had formally converted to Catholicism. After a horrified silence she asked in hushed, appalled, tones "Are you OK with that?" I then told her that I had recently returned to the church ( I grew up Catholic, 12 years of Catholic schooling), after finally getting fed up with the mainline Protestant (Lutheran) church we had been attending. I left out that the final straw was our calling of an openly gay minister- didn't want her calling the PC cops. I got the idea that if we told her that our son was transitioning to female the reaction would have been quite different.

And re: Anderson Copper's "Olive Garden " remark: I hear stuff like that every day. The Moonbats hate us in ways that most of us can't fathom.
Moderator
PS: They are very stupid, but I do chalk it up more to evil. They are pushing a lie that is ludicrous on its face (as you describe well with "unarmed insurrection", yeah, that's the ticket). However, they figure that if they keep blaring this out long enough to the idiots that keep CNN blaring in their living rooms all day, they will get through that THIS IS SERIOUS! Hey, it worked for the Kung Flu Panic, so, yeah, why not?

I agree that this is a great excuse for Patriot Act 2.0. Plenty of GOP are onboard just as the first round near 20 years ago was nice and bipartisan. Do the GOP cucks really fear that this even has threatened their safe, social scene in Washington, FS, or is it that there are powers behind all this, ready to continue the Communization of America?

Mr. Anon
PS "I don't know how stupid these talking heads and their associates on CNN really are."

Well, they're on CNN so - very stupid. Well, to be fair, some of them might just be evil.

Liberals and the Democratic Party are pushing this "insurrection" line and/or the "domestic terrorism" line.

Right, a bunch of guys who all own guns break into the Capitol without their guns, and that's an "insurrection"? Sure, they staged an "unarmed insurrection". Perhaps, history's first.

The "domestic terrorism" label is clearly intended to gin up support for their Patriot Act 2.0. Except now the military/industrial/surveillance/intelligence state will be focussed on us instead of a bunch of goat-herders in Goat-F**kistan.