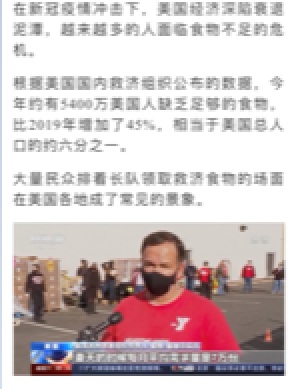 The screenshot above comes from my China source and is off of the ubiquitous WeChat app. The screenshot is a bit blurry and hard for me to read... especially because I'll be damned if I'm gonna learn 4,000 multiple-squiggly-lined characters just to know what the hell is going on in that place.

Here's what this piece of CCP news says though: Apparently 54 million* or so Americans are short of food and have been waiting in lines, like a bunch of ghetto-dwellers outside the COVID testing center with the free chicken dinners, for food. We are undernourshed, from the ill effects of our mishandling of the Kung Flu, says the intrepid investigative reporter of the CCP. This is from the crowd that has been importing and rationing pork due to the great Porcine Crisis of '19. (See also our follow-up on the rationing - The People's Pig.)

As we discussed in Part 2 of our review of Kai Strittmatter's We Have Been Harmonized, the President-for-life-per-constitutional-revision Xi JinPing has gone full Totalitarian on the Chinese people. (Never, never, go full Totalitarian! ... oops, gonna have to say that more quietly in the future...) As all students of history should know, the Totalitarianism usually doesn't stay domestic forever. If you want the people to remain in fear, you need to create those external enemies. China has a very good reason to see President Trump and America as the mortal bogeyman, errr enemy, of the Middle Kingdon. See, we are reneging on our deal to give away all manufacturing and engineering know-how to China for nothing. We have been reneging on the deal we had to let in military and industrial spies in on demand, and to educate Chinese visiting scholars and graduate students at the expense of American kids, all these in return for that endless supply of Cheap China-made Crap. They say it's all well worth it, so ... You are a very, bad, bad, country, America.

Where were we here, oh, yeah, well the Xi-led CCP that runs the whole place is now putting out propoganda, so that the Chinese people will understand how bad we suck. We here all happen to know that lots of Americans may be fed on the wrong stuff, but they surely do not lack for calories.**

We can all treat this propaganda with a grain of salt, or should, anyway. That's when I run into articles by people like the high-IQ Ron Unz himself, who are the biggest skeptics in the world when it comes to American political history, but will believe everything they read out of China. Hey, Ron Unz, you've got your American Pravda series, and good on you for all that reading and writing. but why would you think there wouldn't be any propaganda out of the Totalitarian Chinsese Communist Party? I'll have to drop this into a Ron Unz thread some time. Really, the guy can get pretty reasonable at times, and he TRIES to be fair. However his open-mindedness to an extreme degree coupled with his anti-all-things-American attitude make him come across like a naive imbecile at other times.

Don't be a Ron Unz. Don't believe everything you read, as my Dad told me long ago. I think it was "believe 1/2 of what you read and 1/4 of what you hear", to be precise. The numbers have probably only gone down since then.


* My China source told me the number, and I see where the blurry screen shot makes sense. The Chinese numbering system is simpler than others when it comes to counting - there is no "teen" or "twenty/thirty/forty" just a literal translation of 35 as "three ten, five", for example. It's easy in that sense. However, they don't put the commas for the big numbers every thousand-fold, but every 10,000-fold, and the wording goes along with that. One "wan"(?) is 10,000, and then 10,000 wan is one "yi" (pronounced just "eee"), meaning 100 million. The screen shot with what looks like a dash, means 5,400 wan which is the 54 million I was told.

** That's when I knew the Gallup poll I was a respondent to recently was getting stupid in a hurry, when I was asked that series of questions about people I know not getting enough food.

Moderator
PS: Re the food lines, yeah free Thanksgiving dinners for people too lazy to cook up something. I believe the Chinese wording is purposefully massively misleading on this, ridiculous numbers notwithstanding.
Moderator
PS: Alarmist, I've been writing some the same here before as you wrote in your 2nd paragraph. If i knew the Chinese would just undergo another big "Great Leap Forward" or Cultural Revolution fuck-up on their own, I wouldn't care all too much. However, this Xi JinPing wants to take the Chinese Orwellian State worldwide. It'd be back to containment, as during the Cold War, except nations are much more intertwined now.

See my last part of the review on "We Have Been Harmonized" on this subject. If I had not read that book, with a good deal of corroboration by 'the 17 Chinese experience and my China sources, I'd all agree, leave them the hell alone.

Actually, we still should leave them the hell alone, but I don't think they are ready to do likewise. The first thing required for us is to kick out the Commies that can be easily kicked out. Zhou Bai Dien is going to do just the opposite.
The Alarmist
PS

Yep, that’s 5,400 thousands, so 54 million. I’ve seen pics of the food lines, and there were thousands of cars, but I doubt enough to represent 54m. My question is, where do all these starving people get the gas money, or have we conditioned millions of Americans to go to great lengths to leech a free Thanksgiving dinner?

I worry less about the Chinese than I do about how the criminal elite in DC plan to manage forward. The same joke that applies to Russia applies to China: Why do the Chinese keep putting their country next to more and more US bases. Well, OK, they have pushed out a little on the China Sea, but it is the China Sea after all. ;)
MBlanc46
PS For the past few years we have been reneging on handing over the republic that our ancestors built to the Chinese. But that will come to an end on JAN 20 at about noon. Our elites will resume giving away the store just as fast as they can. That’s no reason for the Chinks to stop p*sing all over us in their internal propaganda, but their elites know that they’re about to re-board the gravy train.