The Mayflower Landing at Plymouth - 400 years ago today

(See previous 400-year anniversary posts about the Mayflower and the Pilgrims here, here, and here, in order.) 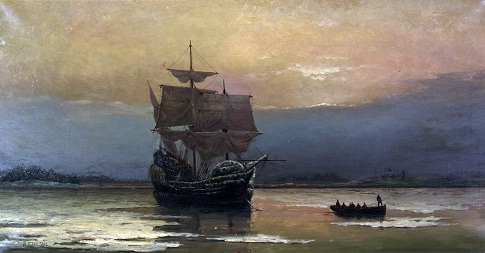 Yes, it was 400 years ago, on December 18th, 1620, when the Pilgrims first set foot on the land that would be the Plymouth Colony, to be incorporated into the Massachusetts Bay Association 71 years later, to become an important site of the independence movement from, and scene of the first shots fired in the Revolutionary War against, Great Britain 155 years later, and to end up a great bastion of left-wing Socialist policy and Totalitarianism about 400 years later.

There is a short page on the History.com (from what's now the Pawn Star channel) site about this important historical event here.

We learned about the famous Plymouth Rock, at the site of the landing, back in elementary school. I've never been, and now in this time of "woke" anti-tradition and historical erasure, I don't know if we'll get to see this rock. 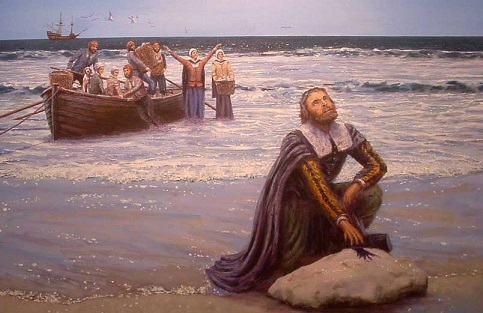 I don't want another picture on the phone to prove that, yeah, I went there and am not just saying I went there. It would be neat, as with the Roman Colosseum, to just be there to imagine what happened 4 centuries back. The 100-odd pilgrims had made that rough 66 day journey to a land of vast wilderness with unknown creatures and natives. They'd been holed up on the ship for almost a month and a half and were finally setting foot on this land that would be the new home for themselves, their families and the future of a new way of life for their progeny.

Just imagine it! This wasn't the surface of the moon. Instead of a greatly technical achievement, watched and applauded by and amazed hundreds of millions of fellow humans, these people were in a livable place, but on their own, way out of range of any form of communication with the place they'd left. The future for them was a big unknown. I like this painting below of these settlers wandering around checking out this new world of theirs. 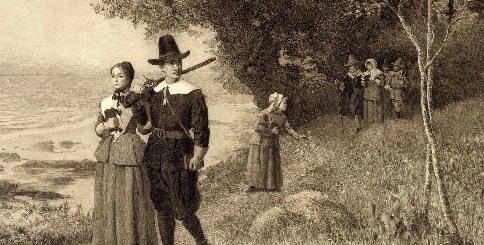 Moderator
PS: Mr. Blanc, also, these Puritans went to Holland to try to live their own way there for a while, but Holland was not good enough for them. They went by England only for supplies (and the other ship and more passengers) before they headed across.
Moderator
PS: Swingtown, I'd like one of those hats myself. I'm sure we made some during kindergarten many years ago.

Speaking of kindergarten, Mr. Blanc, I was thinking that I probably knew this in kindergarten or 1st grade, but regarding those Puritans, I read that only 1/2 or so of the Mayflower's passengers were those pesky Puritans. The whole group was called the "Pilgrims" I think, and I'm guessing they all stayed together out of necessity. (Over the 1st winter, starting officially a couple of days from now 4 centuries ago, about half of the 100 or so people died.)

I do agree that the descendants of the Puritans, the later hard-core abolitionists, etc. have been a pain in the ass. However, the modern Mass-holes (our Ganderson is a MINO, haha) are probably not even descendants of Puritans, but of century/century-and-a-half ago immigrants and then modern-day immigrants too. I don't know, but even old-time Bostonians make NY City people seem downright hospitable in comparison.
MBlanc46
PS Their descendants are right pains in the posterior. I imagine they were, as well, which is doubtless why they felt that it was in their interest to get the heck out of Britain.
Swingtown
PS Dat's wayciss! I have an original pilgrim hat and Pwn Starz offered me fourteen cents for it.
How dare those white Euro pilgrim imperial colonist capitalist pigs come here and destroy the utopian paradise of the indigenous peoples.
Forward! The Great Leap Forward.