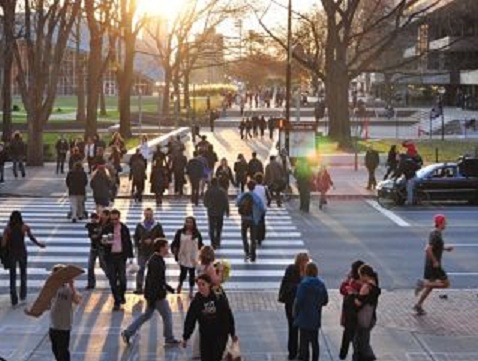 Not, don't worry, it's not Reverend Martin Luther King, Jr, CPUSA-Board-Cerified day come early. (He didn't get it anyway. People had been judging others by the color of their skin, because, lots of the time, it was a pretty damn good way to judge the content of their characters. Nice try, Martin!)

Nah, this was just a plain old dream sequence at night, with no speech to be given later at the Lincoln Memorial. It doesn't involve sex with either of my parents or bathroom issues either, so I don't know if Dr. Freud would have much of a comment, even he were alive today with some internet.

It's weird, right, as if you wake up right afterwards, some of these dream scenes are so vivid, but they easily fall right out of memory. Is our brain telling us not to remember the stuff that wasn't real? That'd be a good feature. Often I can hold onto just a few images a day later.

Maybe it's from the COVID pizza-joint post that brought this up, but I was at a pizza joint with a work colleague that I don't' see very much. He had one of those personal pan pizzas, perhaps 10" diameter (between NY and Chicago style. I was not impressed.). I didn't have one due to having eaten already so I bought a coke. As is the case now, the place was empty except for us two and this Millennial guy, who I asked in a friendly manner "what's up with you kids these days". Something like "nothing much" was the reply, which is to be expected during these times, plus with his wearing of a mask, I couldn't tell for sure that's what he said.

The bearded young guy (you know how dreams are - first I saw a beard, then I saw a mask) rang us up from behind the piece of plexiglass. I gave him a 20, and got a buck and some change back. "You've got to be kidding me, for a small pizza and 2 drinks?" "Yeah." I already heard this 10 years ago, but a twenty is indeed the new fiver now.

It turned out that we were on a long road trip, something like 1,000 miles from home at this point. "Let's go check out the campus." As we walked a couple of blocks from the car then well into the campus, I realized I'd lost my friend, who'd been behind me. I have a good sense of direction, but I already didn't remember where the car was, and I had just the old clunker retard phone. "Whoa, without the phone, I don't know how much trouble this would be", I thought.

Well, this campus was just full of people. Nobody was face-masked up, and the people were as close together as is normal. It was great seeing the place. I figured I'd just roam around and call my friend later on to get back. I headed toward some buildings that housed some of the, what we now call STEM, departments. On most campuses, these buildings aren't the fanciest, as those professors and students just don't give a rip. They've got interesting work to do. It was the same here.

I was really enjoying the magical normal times on the campus. As I was taking a short-cut toward what I figured was the way back, I ended up in some high bay (say 40' x 100' with a 20' ceiling) that housed the math or physics geeks' offices or labs along with lots of surplus crap of all sorts. That's typical - you can throw the math guys in a basement somewhere, and start storing old lab equipment and computer punch-card machines. They don't care. Just don't mess with anyone's red stapler.

Being in a good mood, I ran down the metal on the edge of some stairs, where there was no railing. As I got to the bottom, some long-haired math or physics grad student came out of an office and was so happy to see someone. He had a huge smile. For a second I thought he was gay, as he was so friendly, but nah. He was glad to see an unmasked normal individual. I made some anti-Kung Flu Panic smart-ass remark, and the guy was even happier.

"Well, I gotta go back", I said and left. What was "back" in this dream, to this PanicFest world of ours? That's what I think. Of course, I'm no Sigmund Fraud, and you can't do any Medicare billing by analyzing your own dreams, so ...

I have no idea why that video was memoryholed, but here's another copy...

☮
Adam Smith
PS: A little off topic, and you may have seen this already, but check out this amazing video...

☮
Moderator
PS: Dieter, regarding Orange Man: No doubt, he is no man of science. He's a bullshitter but with some pretty good instincts. He did realize that this whole COVID thing was used against him, and would have been used against him ANY way he handled or didn't handle the supposed crisis.

However, what about the actual "men of science". This Fauci guy was back and forth on everything. The problem is, when you start with very uncertain data, and don't even know the processes (in this case, the method of contamination - surfaces are where you get it, no airborne, no we dunno!) the best mathematics in the world gives you garbage out of your models. Ron Unz is a perfect example of a guy who fell head-over-heels for that stuff.

This reminds me very much of the Global Climate Disruption™ pseudo-science. I mean, Climatology is a good, hard, potentially-useful science. However, not nearly is known of all the Earth's heat exchange/thermo/fluidic processes to make a model of the whole damn climate. I don't care for the garbage output from these people.

(Speaking of which, we haven't heard from little pig-tailed Greta in quite some time. I hope she hasn't been capsized into the North Atlantic.)

I always appreciate your musical references and thanks for the compliments, Dieter. "Our Lady of the Forest" is on the way, in LARGE PRINT (it's all they had - gonna be heavy, man!).
Dieter Kief
PS PS - I'm stuck forever between - old Siggi and - new Leonard. Since Leonard is the rather stylish guy I simply go along with his findings and at the center of those there is the simple advice: Never mention the word pizza. Way too trivial - and doesn't rhyme nicely too.

As for the happy part - that's you, man, you're obviously quite happy in your dream with the things how they are right now, even without your old friend, because - you're back to - science, and not least mathematics. Which is obviously quite a joy for you to be/have around.

- Achmed - your dream is the nightmare of any shrink really, because you are so well off and plainly happy - with just a little bit of existential spookiness left to keep you curious.
From the shrinks perspective: Just - perfect. - Many a shrink would - envy you for your quite upbeat and straightforward dream.

On a rather serious note: Orange Man's very aggressive attack on the Swedish corona-path in springtime, in the footsteps of panic-fest mastermind Fauci - that was so unscientific - and here is the point that shows, that it is a relief of sorts to be rid of Orange Man. He behaved just not very orderly and not the least bit statistically (and therewith: mathematically...) sound at times.

(Btw. - that's what hurt Hail the most, I think. He - I don't know at all - but he could be one of those math-guys in the chaotic basement with long hair and all, you know. - They are pretty unconventional but they deeply care for sound arguments - and this kind of sound intellectuality you simply could not have with Trump, who is always on the opportunistic trip - looking out for - - - success. So - he has no problem to side with Fauci at times and - at other times, to side with BLM... what, I think makes you gasp for fresh scientific air the longer the more - and be basically quite happy with the math guys -even if they look like Jesus at times - and therewith cross the gender line and look like women (the long hair...) - which might be a bit spooky but - is in the end - rather god mannered and - makes you happy, because you know, they are MATH-guys, may they look however they want. - As I said: A really nice dream. - Close to  - clairvoyance...

Now I  - like an old radio man - bring in my commercial at this point: I recommend to read: The novel Our Lady of the Forest by David Guterson about the crazy anabaptist mood we're in, shown in an example of regular folks, which are overwhelmed by a kind of Greta-like modern-day Saintly - Experience (cf. Joe Rogan and Jimi Hendrix (if all the hippies, cut all their hair / I don't care...), of course).

For the rather humorous folks: Read Guterson's very insightful and pleasant novel before you read Budding Prospects by T. C. Boyle, and you have the perfect West-Coast-duett of sorts - "singin' harmony"  - with "the Angels that live in Houston" (Little Feat on Dixie Chicken - Roll um Easy)!
https://www.youtube.com/watch?v=ptYJqCLJLL8

(They're in genius mode here - they just roll along with the thrilling notes... - flyin' way up there - oh - just in case: If somebody asks why Angels can fly: They take themselves lightly...(G. K. Chesterton said that, hehe)).
Moderator
PS: Robert, if that's really the case, this is not a good time for a transition. I've got too much shit to do, and I'd have to do a ctrl-R all over this blog for "differently oriented" instead of "homo". Too much work ...
Robert
PS: Well, if you want to be Freudian, 'pizza' is awfully close to another certain word. Although $20.00 might not buy you one you wanted to get your pickle near.

(Sorry, it was just too good a set-up. Did you plan this?)
Moderator
PS: Hello Dieter. So you are 2 degrees from Sigmund Freud. I should put stock in your analysis then, but I don't know how you see my loss of my Orange Man bringing me back to a good normal.

Who the heck was that long haired math (or physics) geek who was so happy to see anyone? What's the significance of the pickle*, errr, pizza?

* Old Arlo Guthrie joke there ... "I don't want a pickle, I just wanna' ride on my motorsickle...
Dieter Kief
PS Well - I live near two cities that old Sigmund Freud has visited once - a small German one (Radolfzell) and a small Swiss one (Kreuzlingen) and I knew a Doctor who had worked for decades with one who had spoken to Sigmund when he visited, not least because he was indeed the reason, Sigmund cared to come here in the first place. This is the closest I have come to the realm of geniuses if I don't count the pleasnat summer saturday afternoon I met with Leonard Cohen in a - tent (I kid you not). Ok - the answer to your dream is easy: The Orange Man is pretty much history so we can all go back to normal, which is a bit strange, but basically - quite good (The Orange Man being history by now is symbolized in your dream by the friend you've left behind. Hehhe - I do hope you don't mind. But such is the logic of shrinkery - it's not meant to be not simply pleasant. Insights are allowed to hurt a bit in this realm. - when in doubt you can always ask Sigmund or - if this is too complicated - yours truly around here.