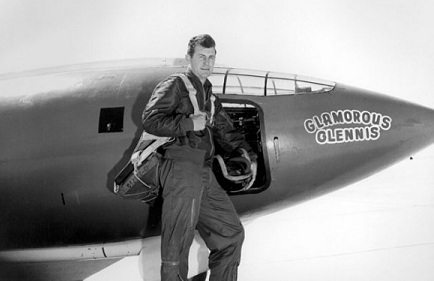 Peak Stupidity promises not to eulogize movie stars or baseball players*. We damn sure won't be doing it for any politicians, other than one, being Dr. Ron Paul, and hopefully not anytime soon for that one. Oh, that is, unless the R.I.P. stands for Rot In Place, a sentiment we reserve for people like Juan McAmnesty. We can't be doing R.I.P. posts daily, as it'll get boring.

However, Chuck Yeager was an American hero of sorts and definitely an American icon**. I do use the word hero, not a term I overuse like the soft American public does for anyone including everyone in the whole healthcare industry. (Would that include the healthcare billing people in the cubicles. Heroes? Seriously?) Many test pilots are engineer-pilots who push the well-engineering-calculated envelope of new jet liners or business jets. They are good pilots and engineers, but no heroes. A guy who volunteers to take up experimental planes past known flight regimes for his country in the Cold War race for air superiority is a hero.

Chuck Yeager is most known, or should be, for being the first man (hence, human being) to move through air faster than the speed of sound. That was in the X-1 rocket-powered "plane". That's in quotes because the power wasn't there yet to propel anyone from the ground up to speed like this (that came very quickly after though). This missile was dropped from the bomb bay of a B-29, as high as they could take him.

That was the first of many piloting accomplishments of Chuck Yeager. One could read the Tom Wolfe book or go watch the movie The Right Stuff instead to learn more***. I happened to watch the movie one day before spending most of a day at the Washington, FS Air & Space museum (before it became PC and woke like everything else). That was pretty damn cool, seeing some of the aircraft and spacecraft from the movie in real life just afterward.

There is a lot more about Chuck Yeager, his accomplishments, and the planes, on the Chuck Yeager site and in this article on the EarthSky site. Specifically regarding the F-104 Starfighter that Chuck Yeager ejected out of, and one scene in The Right Stuff was about, the reader may want to check out more on that on this site for more on that impressive but dangerous (in its ground-attack role) and controversial century-series fighter. 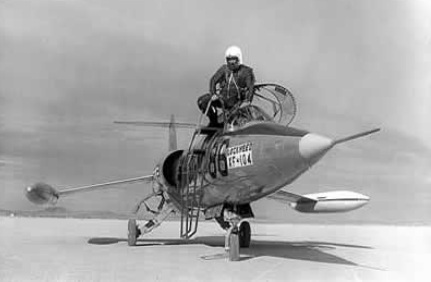 They don't make so many Americans like this as they used to. We've had it so good for so long and have been resting on our laurels. Holy moley, that accomplishment of breaking the sound barrier happened over 73 years ago, only 34 years after the Wright Brothers first flight of a controlled powered airplane! We have not come that far over those 73, or at least the last 49 since the end of the Apollo program.

One can't rest on his laurels but for so long. The further hard times will come. Hopefully they will bring out the few remaining Americans left with qualities like Chuck Yeager. Rest in peace.

* Yes, I'm referring to Mr. Sailer's Chuck Yeagar eulogy that turned into one for baseball player Dick Allen.**** It's his blog, and he loves that baseball and the movie business, the former of which I do appreciate at least, so I can't complain.

** He's got "Charley West" (Charleston, West Virginia) airport named after him. That's better than humble Jimmy Carter's Americus, Georgia Regional (where you can still just get out of the plane and take a leak beside the taxiway), but not as prestigious as Ronald Reagan's Washington, FS DC National, "Reagan Field".

*** This Tom Wolfe book and movie is not solely about Chuck Yeager, but it has somewhat parallel stories about his flight test crowd at Edwards Air Base in southern California and the 3 phase (Mercury, Gemini, and Apollo) astronaut program.

**** He has since added a blurb from his commenter Syonredux with Mr. Yeager's later thoughts about some low-level strafing/carpetbombing of German civilians during WWII.

ganderson
PS I was corrected,(correctly, I think) either at Powerline or at Sailer's that Charlie "Tall Deval"Parker's...err... Baker's proper title is 'Gauleiter', not Obergruppenführer or Sturmbannführer
Moderator
PS: Mr. Ganderson, my problem with the watching of "sportsball" is simply this: I see men who are intelligent enough to do something or at least discuss (as here) the real problems in the country that WILL affect everyone of us in the long run, that spend NO time on that, but will go as far as to physically fight you, were you to get in a drunken discussion about football.

It's entertainment for some, I know. I enjoy an occasional baseball game, at the ball park, that is, as it is truly a unique American pasttime. What boy doesn't play catch with his dad at least some time, even if never even playing little league? (I know, with the iCrap, things are changing quickly.)

Mr. Sailer has his diversions that he writes about, and I don't fault him for that. I was miffed that he wrote the title "R.I.P. Chuck Yeager", but until he put Syonredux's comment there, the whole thing was about the one baseball player.

Anyway, so long as one is aware that what happens in spectator sports is not important in the big realm of things, then to each his own.

BTW, that SJW stuff being injected into the TV sports has got to be a big turn-off to you, but if it turns more people toward thinking politically, the right kind of people, mostly likely, I see that as a benefit. Enjoy the hockey - I guess that'll be the last thing the SJWs fully destroy.
The Alarmist
PS

General Yaeger wasn’t a college boy, so he wasn’t considered qualified to be an astronaut ... despite being the first commandant of the USAF Aerospace Research Pilot School, the place that trained astronauts for NASA and the USAF.

Whenever someone talks about Neil Armstrong being a great pilot based on a number of “saves” he had in his career, I jokingly point out that the common element at the centre of all of Armstrong’s troubled flights was Armstrong. Yeager told the story of he and Armstrong being stuck in a T-33 in Smith Ranch Dry Lake, which Yaeger figured wasn’t suitable for landing due to recent heavy rains! but Armstrong decided to try anyway. Armstrong claimed the first T&G was successful, but Yaeger dared him to do it again, and Yaeger laughed his head off when they got stuck on the second go.

Believe who you will, but Armstrong, the guy who set the first human foot on the moon, also severed a finger by wearing his wedding ring while working the farm. It’s the little stuff that kills you.
Ganderson
PS. Good Morning Mr. Moderator, and all my fellow Stupids!

I don’t know if you listen to Radio Derb, from which that article is clipped, but it’s on my ‘must’ list- he sounds like John Cleese reading the news.

As for sports ‘heroes- no they’re not , but I, for one will be sad when, for example, Rod Carew dies- watching him play baseball gave me a great deal of pleasure. If i had my own blog I’d probably do a post on him. (and “if I had my way, I would tear this building down.”)
It’s interesting that there is a lot of hatred for sportsball in our thing. I get the hatred for the stuff that surrounds it- the wokeness, the greedy extortionist owners, the sink of corruption that is college athletics (except for lacrosse and hockey, of course 😀), but for my money watching skilled athletes at any level is fun. Besides, since there is virtually nothing but bad news out there I welcome the occasional Steve Sailer golf sociology/architecture post, as well as Powerline’s MLB and EPL posts. I pretty much hate the game of soccer, but I’m interested in its history and sociology. And since Mirengoff is increasingly wrong about everything else, especially the Kung Flu, it makes him less worthless.
As for the rest of your post I agree 100%- did you pull a kid out of a burning building? Then you’re not a hero. The meme of “teachers as heroes” really grinds my gears, except for that guy at Columbine who led kids to safety at the cost of his own life.
And, if any of you have not read any Tom Wolfe- go back and do it- he was a national treasure.
Anyway, thanks for indulging my long post, I’ll go back now to being depressed about the fact that the Kung Flu panic is intensifying here in Mass- Obergruppenführer Baker (or is he an Unterscharfüher?) is in the process of locking the state down again. Check out his presser from Tuesday where he tells an obviously fabricated story about some people he knows who got the doom. Pathetic

At least we have the Swallwell story to keep us amused!