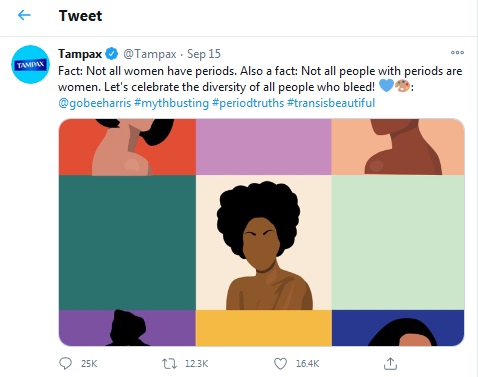 I mean the "New Coke! OK, we hear you, it sucks. Now, New Coke AND Classic Coke! New Coke? Oh, you don't want that crap anyway." campaign was damn clever, you know, to make the product visible and all. Some people would have never heard of soft drinks otherwise, I guess ... However, I don't think it changed the size of the market, so... actually, what was the point again?

This campaign, though, involved some real out of the box thinking! Materials and methods to stem the flow, if you will (well, you'd better!), of menstrual blood have been around since the 15th century BC, per Wiki. That was even before the writing of Proverbs 25:24! (We'll get to in a bit.) More recently, Tampax started selling their products in 1933. That's 87 years of sales, and it took just this one guy and his tweet to double the market. I don't think this was meant to be a joke. The tweet looks like the real deal - it doesn't have blood stains, but there is that blue check mark.

The same wiki page says "The average consumer may use approximately 11,400 tampons in her lifetime (if using only tampons)." Whoa, wiki, that there's some pretty offensive stuff, assuming it's women generating all that toxic waste. We men can generate a few tons of it ourselves if we put our minds to it, you sexists. Yes, we can!

The tranny market for Tampax is somewhat limited, as Peak Stupidity discussed already in Can Male to Female Transexuals have Periods?. We delved into the plumbing tweaks that would need to be involved, not beyond the capabilities of modern engineering and surgical practices, but our question was "why?!"

As far as marketing goes, it's time to go with the tide of diversity and inclusion and sell to men in general. Why didn't someone think of this before? If a tweet says that men can have periods, in this politically correct country of ours, who can argue with that? People are much too scared to stand up and shout out "the Emperor has no clothes!", or in this case "these men have no vaginas!" With a strong ad campaign, plenty of male TV viewers can be convinced to find a hole somewhere in which to put these things. It may not be so obvious as to what time of the month to apply them, but we can find out on the Tampax for Men application, excuse me, "app", Ragtime 2.0.

One does wonder whether a passage in the Bible, Proverbs 25:24, may need to be changed now to be more inclusive. Peak Stupidity wrote in part 2 on periods - the 2nd half of that post:

It is something that many religious texts have discussed over the millennia. Proverb 25:24 of the Old Testament, for example says "It is better to dwell in the corner of the housetop, than with a brawling woman and in a wide house.". [King James Version]. Now, this must be taken in light of the times in which it was written. What I mean is, the roofs were flat back then. All the proverbs in the world aren't going to help you when you roll off a 50% slope and fall 10 ft to your death. Anyway, details, details ... modern interpretation could easily have us read "woman on the rag" for "brawling woman" and "man-cave" for "corner of a house top". That is the point, we men need plans for these 2-5 day periods to be completely away, but it must be constructive time for us too - we could be working on updates to blog software just as a random example.

Next, we will have to get an apology from Vincent Furnier, who, while using a nice trans-sexual name like Alice Cooper, had that old fashioned notion that, pssshaaaww, Only Women Bleed.

PS: If you have noted the date of this informative tweet, you may wonder about the delay in the writing of this post. Peak Stupidity was going to write it in a timely manner, but that was a bad time for this blogging. In mid-September, or around that period, all my best typing fingers were totally cramped up, all my friends and family were acting weird and mean to me, and life was just meaningless. All those people have changed back to being normal now, so it was time to write the post.

* Though I met an engineer who worked for a company that made machines for the Proctor & Gamble tampon production line in Cincinnati. The output of one of the huge machines was something like 10 tampons/second. If something got out of whack, whoa, talk about the supervisor being on the rag!

"If you think you're the Queen of England, does the law require me to address you as "Your Majesty" when I speak to you? Good luck with that."

Exactly. In days of yore, the stereotypical crazy person - it was a cliche really - was a guy who thought he was Napoleon. Well that crazy guy can walk around in riding boots with a bicornered hat and his hand shoved in his cut-away coat bellowing commands in corsican-accented French, but why should I be obligated to address him as "Mon Empereur!"? Why should I be obligated to share his madness?

Men who think they are women, or vice-versa, are mentally disturbed. People who think they are one of dozens of invented "genders" that never even had a name ten years ago (because they never existed) are insane. They should not be indulged in their craziness. And forcing us to use their assinine "pronouns" and share their delusions is an act of aggression.

Bill H
PS I would ask the bleeding male, or non-bleeding female, why do I have to speak in accordance with the way YOU think?

If you think you're the Queen of England, does the law require me to address you as "Your Majesty" when I speak to you? Good luck with that.
Adam Smith
PS: I could see a Monty Pytonesque skit about this...

You can have your virtual vagainas, titties, and all the periods and pronouns you like, but we don't have to pretend that you're a woman(/man), that male pregnancy is real, that there are more than three genders and you can't get mad at us when we don't use your preferred pronouns.

☮
Moderator
PS: I just made that one up, Adam. Maybe they could compromise and have "virtual vagina's" etc. How about "you have the right to have periods" like a Monty Python skit.
Adam Smith
PS: I'm pretty sure these people are not into compromise...

WTF is a virtual period? and Why would anyone want one?

☮
Moderator
PS: If these people could only compromise just a little with us, Adam. "OK, you can have VIRTUAL vaginas, tits, and periods. How's that strike ya'? Deal?"
Moderator
PS: Mr. Blanc, I paid for a bottled Mexican brand cane sugar Coca-Cola a couple of years ago to see if I could tell the difference from the HFCS stuff. Honestly, I couldn't tell, though I was hoping for it to taste better and remind me of the old days.

On the trannies and menstruation, I guess it's the M-to-F ones that you don't want to argue with about it. Tell one of those big strong "women" that they don't bleed monthly and you may end up bleeding a lot yourself, haha!
Adam Smith
PS: Good morning everyone...

truth·i·ness (noun) the quality of seeming or being felt to be true, even if not necessarily true.

Truthiness is the belief or assertion that a particular statement is true based on the intuition or perceptions of some individual or individuals, without regard to evidence, logic, intellectual examination, or facts.

Somehow I doubt PlannedParenthood is talking about hermaphrodites with persistent Müllerian duct syndrome.

Mr. MBlanc, I too believe the wacky theory that only women menstruate. It's probably ok because I have no political ambitions or desire to work in academia. This belief is apparently a sin that violates twitters commandment against hateful conduct. (I'm sure it is not my only belief that violates a twitter commandment.)

Evidently, saying only women have a cervix or only women menstruate is a transphobic thing to say. It "erases" all those people who have cervixes and those who menstruate but refer to themselves with male pronouns or non-gender specific pronouns. Therefore, we need to change our concept of "biological reality" so we don't offend some overly sensitive people who are uncomfortable with "biological reality".

Their feelz are more important than our so called "facts".

☮
MBlanc46
PS Mme B says that she read somewhere that the motive behind New Coke was to replace sugar with corn syrup in old Coke. Coke drinkers were so overjoyed to have old Coke back that they didn’t whine about, or perhaps even notice, the corn syrup. And of course the not-women who have menstrual periods are simply women who say that they think that they are really men, and the great and the good will try to ruin your life if you dissent. But they are women. Therefore, if they’ve not reached menopause and aren’t biologically defective, they menstruate. I’m sure that whatever conglomerate that owns Tampax is merely demonstrating that they’re on board with the entire globalist/multiculturalist/poststructuralist program.
Moderator
PS: I recall that from the same time, Robert. I think it was said in support of Dan Rather's made up (or doctored up) letter about Mr. Bush and his time in the National Guard, We both have pretty good political memories, or else we both don't, haha.
Robert
PS: Mr. Smith, I like that word 'truthiness'. I now see that it is a legitimate word: According to the all-knowing interwebs --- early 19th century (in the sense ‘truthfulness’)

I think I first heard it in the context of some big-league reporter caught prompting fake-news about W. and his evasion of the draft. "But, it had the air of truthiness."

If it has a blue check mark, it must have truthiness...

Clown world is silly and amazing...